The Tale of the Princess Kaguya

Long, long ago, there lived an old bamboo wood-cutter. He was very poor and sad also, for no child had Heaven sent to cheer his old age, and in his heart there was no hope of rest from work till he died and was laid in the quiet grave.

At the time of release (2013), this was the most expensive Japanese film ever made.  The problem is it doesn’t look like it is.  My guess before I did a bit of research was that is was one of the cheaper efforts.  The art is far removed from any of the other Studio Ghibli films, utterly beautiful and enchanting in its own way, but very stylistic and at times almost sketchy.  It is also a very, very long film, demanding a lot of patience from the audience.  Realistically this was never going to make its money back, despite being Oscar nominated, and it eventually limped to about half of its original costs in revenue.  It might have benefited from the script being edited down to about two-thirds or even half of its length before animation began, although it’s an undeniably stunning film for those with a suitable attention span.

Suddenly the green grove of bamboos was flooded with a bright soft light, as if the full moon had risen over the spot. Looking round in astonishment, he saw that the brilliance was streaming from one bamboo. The old man, full of wonder, dropped his ax and went towards the light. On nearer approach he saw that this soft splendor came from a hollow in the green bamboo stem, and still more wonderful to behold, in the midst of the brilliance stood a tiny human being, only three inches in height, and exquisitely beautiful in appearance.

This was the final film from Isao Takahata, Studio Ghibli’s other genius, who sadly died in 2018.  It is based on an enchanting 10th Century Japanese story (I am quoting from a 1908 version in this article, by Yei Theodora Ozaki).  The story is to a certain extent open to interpretation, but in a nutshell it’s about a bamboo cutter and his wife who have no children, until the bamboo cutter finds a baby in the forest, a gift from heaven.  She grows at a remarkable rate, and is a happy child, adoring her surroundings, but the bamboo cutter comes into a great amount of wealth and decides she should live as a princess, and that’s when things start to go wrong.

“You must be sent to be my child, for I find you here among the bamboos where lies my daily work,” said the old man, and taking the little creature in his hand he took it home to his wife to bring up.

This is a good film for parents to watch, a troubling and poignant one, but a good one.  It has an important lesson at its heart: what you think is best for your children will not necessarily be right for them.  The bamboo cutter wants to give his daughter the life of a princess, but in attempting to do so he denies her the rural surroundings she loves, rips her away from her friends (and the love interest she seemed destined to spend her life with), and almost forces her into the arms of a rich man to assure her future.  None of these things are what she wants from life.  Money can’t buy happiness, and all it buys the princess is misery.

It all chimes so deeply with parenthood, taking parental feelings and rendering them literal, such as Kaguya’s extraordinary rate of growth (who hasn’t said “don’t they grow up quickly), her father trying to turn her into a princess (whose daughter isn’t their “little princess), and finally the child fleeing the nest, in a most tragic fashion.

Then the chariot began to roll heavenwards towards the moon, and as they all gazed with tearful eyes at the receding Princess, the dawn broke, and in the rosy light of day the moon-chariot and all in it were lost amongst the fleecy clouds that were now wafted across the sky on the wings of the morning wind.

This isn’t a children’s film, in my opinion.  Superficially there’s little to preclude children from watching, certainly not the natural nudity that a few commenters huff and puff about, which is entirely harmless in its inclusion in the film.  But I do think a lot of children would get bored with it, and the ones who see it through will probably be left feeling distressed by the troubling ending.

The composer is Ghibli stalwart Joe Hisaishi, and he heightens the sadness of Kaguya’s departure by accompanying the arrival of the moon gods with happy, celebrational music.  It’s incredibly clever, heightening the sense of wrongness, and the way in which these gods just don’t understand how human emotions work.  Their own happiness is entirely empty, and they take a blank-faced Kaguya back into their care.  Into their custody.

Princess Moonlight’s letter was carried to the Palace. His Majesty was afraid to touch the Elixir of Life, so he sent it with the letter to the top of the most sacred mountain in the land, Mount Fuji, and there the Royal emissaries burnt it on the summit at sunrise. So to this day people say there is smoke to be seen rising from the top of Mount Fuji to the clouds.

I know I bandy the word “genius” around a lot when it comes to Studio Ghibli, but Isao Takahata was to my mind one of the greatest animators who ever lived.  The Tale of the Princess Kaguya will forever stand as his ultimate masterpiece, troubling, compelling, and beautiful. 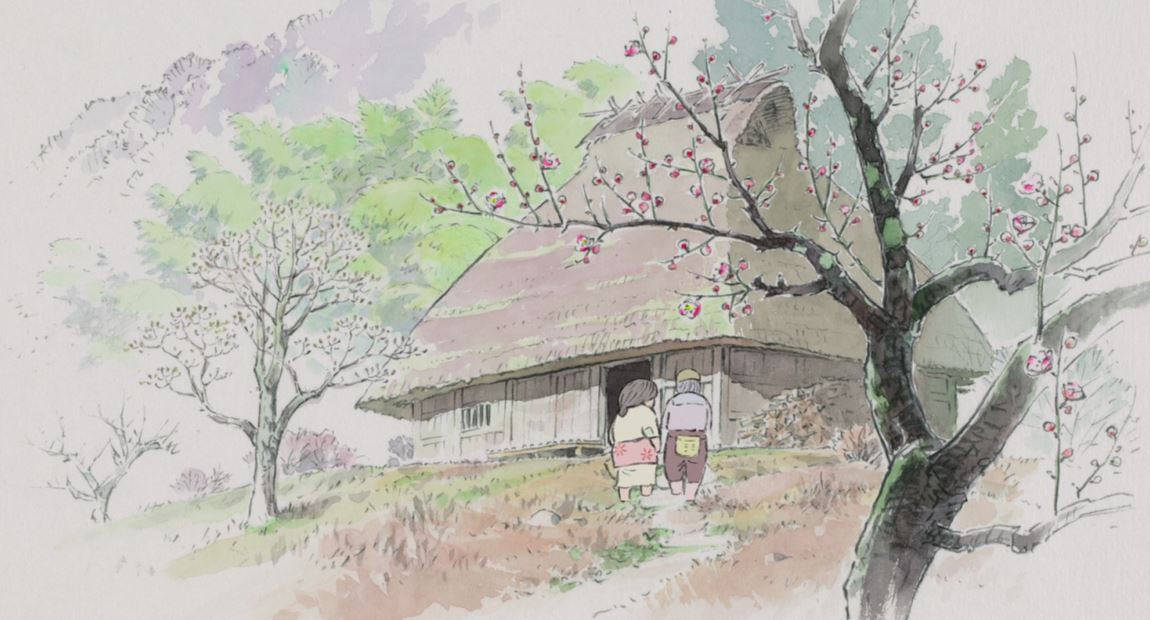 My Studio Ghibli rankings so far, again simply to help anyone trying to decide your purchasing priorities, but as usual I should mention that anything remotely near the top of the list is magnificent and there is a hair’s breadth to choose between anything in the top 10 at least.

Next time we will be looking at Studio Ghibli’s final masterpiece (so far), When Marnie Was There.   RP

Read next in the Junkyard… When Marnie Was There

Author of windowsintohistory.wordpress.com Co-writer on junkyard.blog Editor of frontiersmenhistorian.info
View all posts by Roger Pocock →
This entry was posted in Anime, Entertainment, Movies, Reviews, Studio Ghibli and tagged Isao Takahata, The Tale of the Princess Kaguya. Bookmark the permalink.