Posted on January 29, 2019 by DrAcrossthePond

Peter Davison’s premiere season is all over the map for me and includes the first episode I ever give a zero.  I dislike a number of the early episodes but really get into the later ones.  Roger and I are in close agreement here.  Let’s see… 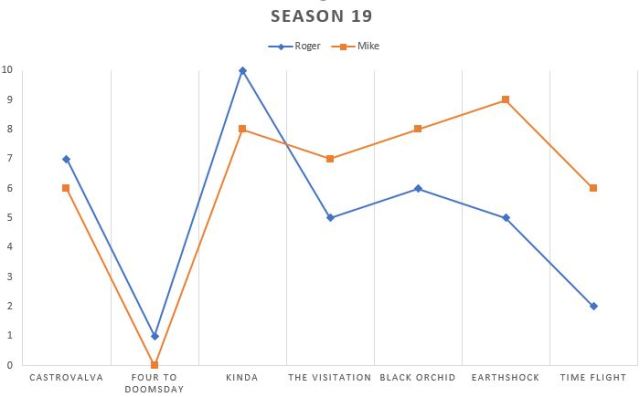 RP: 7 – The ideas man comes up with a great one here, but Bidmead is still awful at dialogue and the way the post-regeneration stuff is handled is dreadful.  Somehow much more fun than it should be.

ML: 6 – It’s an alright introduction but the Master gets tedious.  The idea of Castrovalva, based on a painting, is cool but with the Doctor missing for so much of the story and then being laid up for a lot of it… it just doesn’t hold up well.  Very average.  But on the higher end courtesy of so much of the interior of the TARDIS in episode 1.

RP: 1 – One or two good ideas lurk beneath the surface of this mess.  Adric and Tegan are both completely hideous throughout the whole story.

ML: 0 – What?  Did they just have a cliffhanger based on someone changing clothes?  You’ll notice I give VERY few episodes a ZERO, but this one warranted it. (If the Doctor changed clothes, that might have warranted the cliffhanger!)

RP: 10 – That rare thing, a Doctor Who story from the Classic Series that is populated with believable people who have actual character arcs throughout the story, even making good use of Adric and Nyssa.  Bailey makes use of a rich mix of inspirations and combines them brilliantly.  One of the best.

ML: 8 – I confess this gets an 8 because Roger drew my attention to things I had never really connected with.  No matter what, it’s above average, but never really loved it finding it a bit slow.  Some amazing scenes with Mary Morris and some really comical moments elevate it, but I have a harder time giving this one anything higher than an 8.

RP: 5 – Eric Saward at his least-worst, trying to harken back to the glory days of Doctor Who.  He falls into some frustrating traps with his characterisation though, the Doctor in particular.  Achieves average very well, but never tries for more than that.

ML: 7 – While I never felt it was one of his best, I do consider this an above average story, if only just.  I love the setting and the villain, even if the costume is totally unworthy.  I’d like to see those guys come back.  I also give credit to getting rid of the “get out of everything” tool, no matter how much it hurt.

RP: 6 – Does something completely different to any other Doctor Who story, not even remotely related to the Hartnell “pure historicals” it gets lumped in with.  That’s because Doctor Who becomes Miss Marple for a week, but then fails to provide a functional whodunit, giving us only the trappings of a murder mystery.  At least it’s trying to be different.

ML: 8 – I’m a sucker for this story.  I like the short ones and when they do a good job being interesting, that’s even better.  I love the location and think the mundane nature of the threat make for a great short story.  I can’t help but love seeing the Doctor playing cricket too, even if I’m not a fan.  And I have fun thinking a hug can be so grossly misinterpreted!  A wonderfully fun episode!

RP: 5 – Why oh why did nobody realise that the robots in the dark tunnels were the best bit of this, not the returning old monsters on a spaceship?  Not exactly a bad Doctor Who story, but it certainly sets Doctor Who off on a bad road.

ML: 9 – I’m very fond of this story.  Adric’s death was amazing and the end credits were outstanding.  The foreshadowing in the beginning is great, the cut scenes of the previous Doctors always made me happy, and the Cyberman being frozen in a wall was marvelous.  So much about this story makes me happy.  Very good indeed.

RP: 2 – Visually a plane crash, and not in the way it wants to be.  Also pretty tedious and silly, although I love mumbling Kalid.

ML: 6 – I am very fond of this episode for reasons I can’t really explain. Maybe it’s the alien-ness of it.  It’s not a great episode and while I can’t put it above average, I can say I find it on the upper range of average!  Though it was oddly placed as a season finale!

Like any Doctor there are some hits and some misses, but at least we’re getting something new.  This Doctor is incredibly relate-able.  A vast difference to the larger-than-life Tom Baker, but very enjoyable.  Davison’s second season would mark the 20th anniversary of the show.  That would be something special…  ML

Like Loading...
This entry was posted in Doctor Who, Entertainment, Random Chatter, Science Fiction, Top of the Docs. Bookmark the permalink.

2 Responses to Top of the Docs: Season 19