Posted on February 9, 2019 by DrAcrossthePond

You know, some days you’re just in the mood for a light game.  Nothing too detailed or heavy.  So you ask a friend and they tell you, “ooh, you’ve got to try Hand of Fate“.  They’re all excited when they say this, like it’s the best kept secret since Nimh.  “It’s a mix of board and card game with RPG elements and some awesome fighting,” they tell you, conspiratorially.  Hmm, you think, sounds interesting.  “It doesn’t really look like my kind of game,” you say, after watching some footage.  “No, man, you don’t understand… this is next level stuff!”  They don’t say “stuff”.  You drop the money. 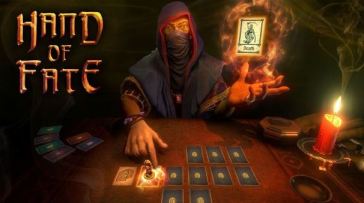 Look, I am pretty easy to please but there are things I like and things I don’t like.  In some ways, I’m pretty locked into a certain style and don’t want to change that.  I know me, and should trust me more.  I’ve been living with me all of my life.  I like my action games but more than that, I need a story.  I’m like the human equivalent of Big Finish!    This game introduces you to a mysterious card reader who offers you to play his game.  He’s mysterious because his mouth is covered and his voice is like gravel on ice after hanging out with Batman.  But that’s it; that’s the story!  It’s like a day in the life of a carnival-goer.  You have a token to indicate where you are on a board which is setup not unlike a set of Tarot cards.  Just look at the picture – Captain Mystery is showing you the very thing I’m talking about.  You move and turn over the card you land on.  Some might be simple: gain a piece of armor, or a weapon.  Some lead to fights.  The fights take place in a mini-game.  I say mini-game, but that’s really the main element of the game!  The card flipping is really the mini part of the game.

The candle adds to the mystery!

In some capacity it reminds me of a modern version of the classic, Archon.  In Archon, you played on a chessboard, and when a character landed on the same space as another, a battle ensued.  This is much the same with the levels getting progressively harder.  But my issue with games like this is that sooner or later, it comes down to button-mashing.  I made it to the penultimate boss!  Do you know what that means?  I nearly completed the game.  But that boss had one of those idiotic abilities: pull you close no matter where you are and do ultimate damage.  You don’t have a counter to that!  I don’t know what one could do against it.  It’s like fighting a tsunami.  I try too!  I’m not a one-shot kinda guy!  I go at it, and at it, and at it.  This was something I think I could have beaten with a few more attempts, but I can’t be certain.  I mean, call me old fashioned, but I like a fighting chance.  In the recently reviewed Assassin’s Creed: Odyssey, you can get swarmed by far superior numbers and still win because you can think and retreat and basically be clever.  In Hand of Fate, there never appeared to be a way to get around that penultimate boss short of knowing some damned fast button-mashes.  But that’s the issue for a guy playing on a mouse and keyboard.  No, see, I want the ability to out-think this joker, not be pulled in like a teenager at a car dealership.

In what way is that a Minotaur?

Conceptually, it’s a good game, and I think it would have been fun to defeat it.  Sadly, before I ever went back to it, the hand of fate played a part in my life causing my hard drive to crash and I’d have to start all over again. Alas, it’s not in the cards.  (Pay attention, these puns are good!)  Hand of Fate was released in 2015 by Defiant Development.  Typically it does get good reviews and maybe if I were playing with a controller, I’d feel differently.  Having said that, I did get 5 hours out of the game and it currently retails for $10, so it’s certainly not a terrible purchase.  I’d be interested to know what others think, especially other PC gamers.  In the meantime, I’m going back to more story-driven games.  And by the god of all video games, I have to learn to trust my initial instinct more!  ML

Like Loading...
This entry was posted in Doctor Who, Games, Random Chatter, Science Fiction, Technology. Bookmark the permalink.