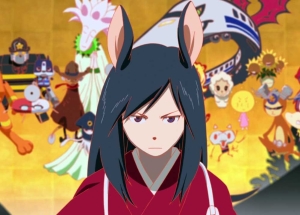 Modern technology is scary and dangerous… or is it?  Our lives are increasingly tied into technology, reliant on it continuing to work to avoid massive disruption to our day to day lives.  What happens if that goes wrong?  And is the technology itself potentially dangerous, i.e. AI?  Or is it simply a modern conduit for risks posed by humans themselves, an invention that could be weaponised rather than being inherently frightening?  These are questions at the heart of Summer Wars, directed by Mamoru Hosada, following on from the magnificent The Girl Who Leapt Through Time.

Released in 2009 and set in 2010, the film’s hero of sorts is Kenji Koiso, a mathematical genius.  Cute girl Natsuki* Shinohara whisks him off to her family home under a false pretence, surprising him by pretending he is her fiancé when they arrive.  She has a huge family, who have assembled to celebrate the birthday of her 90 year old grandmother.  In this far-flung future of 2010, the whole internet basically now takes the form of a cyberspace location named Oz, where people interact as avatars.  It looks like a lot of fun, but it’s tied in to literally everything that we would associate with the internet, and everyone is using it.  That’s all good, until something goes wrong.

Oz is stunningly animated, and the battles that take place there are very exciting, but the film is built on one massive coincidence, which is probably its one and only weakness.  The greatest and most skilled fighter in Oz just happens to be from the same family as the architect of the deadly avatar that brings the world to its knees, and that just happens to be Natsuki’s family.  The three key figures in this story are in the same house at the same time, and the reasons for that are little more than coincidence.  Having said that, it is a very unusual and special family indeed, and a huge one at that, handily including people from all walks of life, medical, law enforcement, etc.  The film is about family coming together to solve a problem, putting aside past conflicts, pooling their resources and abilities.  While this is all going on, a gentle love story is playing out, and while that is going on a story of a broken family coming back together is also playing out.  There’s something for everyone here.

Ultimately there is a positive message too.  It would have been so easy, lazy and clichéd to make a film about technology going crazy and trying to destroy the world, but instead the tech is shown to be a good thing that gets misused by a world government.  And that’s important too.  The world population comes together to help Natsuki and Kenji fight against the ironically named Love Machine that threatens to destroy the world.  People are shown to be inherently good-natured and honourable, with only a few people at the top of the tree causing all the trouble.  There’s probably a lot of truth in that.

I also like how the film makes heroes of those whom society would deem the “nerds”.  Never has typing on a computer keyboard looked more heroic, or frantically scribbling down numbers to solve an encryption on paper.  King Kazma is the greatest fighter in Oz, and in reality he’s a weedy little teenager, but appearances can be deceptive.  Thanks to the support of his family, he is also a martial arts expert in real life.  The film doesn’t make a big deal out of it, but it’s clear that Kazuma has been the victim of bullying in the past.  A lesson in life for the bullies: the weedy kid you are picking on might just be the one who saves your life in future… the skilled surgeon, the brilliant scientist, the computer expert who stops the world from collapsing into a disastrous mess.

Summer Wars is the story of the world being saved by a couple of nerds, and a teenage girl who’s great at playing cards.  Oh, and a family coming together to support each other when it really matters.  Welcome to Oz.   RP

*Natsu, part of Natsuki’s name, means “summer”, so the title has a double meaning that is lost in translation.

Author of windowsintohistory.wordpress.com Co-writer on junkyard.blog Editor of frontiersmenhistorian.info
View all posts by Roger Pocock →
This entry was posted in Anime, Entertainment, Movies, Reviews and tagged Mamoru Hosoda, Summer Wars. Bookmark the permalink.