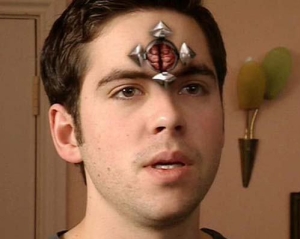 On the odd occasion where I’ve had to buy jewellery, this is what always happens: I find what I want to look at, and a woman with a couple of inch’s thickness of makeup takes it out of a case and places it on top of a mirror.  Now, it’s actually touching the mirror, so the mirror’s not doing much of a job in terms of reflecting the jewellery, so what’s the point of all that?  Well, it’s an old jeweller’s trick that goes back centuries, to the days when lighting in shops was not so bright as it is today, with the shiny surface supposed to reflect light upwards through the gem and make it shine brighter.  Oooo, shiny.  Instead of a mirror, jewellers often used to use aluminium foil, and before that was invented they used tin foil.  This led to a different usage of the word “foil” as a literary term for a character who exists simply to reflect qualities in the main character by being different, to make the main character shine all the brighter, like a jewel.  That’s where failed Doctor Who companion Adam Mitchell comes in.

Before Doctor Who left our screens in the 1980s, it seemed at times that anyone could travel in the TARDIS.  It was almost an intergalactic taxi service.  Notably, during the Fifth Doctor era, the Doctor was lumbered with two companions at the same time who were grumps who wanted to go home: Adric and Tegan.

Did I mentioned it also travels in time?  Whatever.  Get me back to Heathrow.

Then Turlough showed up and tried to kill him, but was allowed to stay on after that.  A different approach was needed when Doctor Who returned in 2005, and something that became immediately obvious was that the Doctor wasn’t going to just ask anyone to join him in his travels.  She had to be blonde.

No, that’s not quite fair, but we’ll come back to it.  The point is that Mickey the Idiot was most definitely not invited aboard, until he proved himself as somebody who was Mickey Not The Idiot.  Rose was brave, resourceful, and with her heart in the right place.  To emphasise that point she was given a foil.  A foil by the name of Adam.

Everything Rose was, Adam wasn’t.  Rose wanted to travel with the Doctor because she wanted to experience the wonders of the universe.  Adam saw an opportunity for personal financial gain.  Rose always acted honestly and honourably, while Adam lied and cheated.  Rose was female, and Adam was male.

Aha.  It’s the unspoken contrast there, isn’t it.  Adam serves as a foil to illustrate just why Rose is great companion material, by being the opposite to her, but there’s this nagging feeling that the Doctor just doesn’t want a bloke around.  Mickey: rejected.  Adam: rejected.  Jack: rejected.  Rose’s mistake in Father’s Day actually has far more serious consequences than Adam’s in The Long Game, but she is forgiven, while he gets kicked out.  One important point makes it work: Rose is honest and apologetic about her mistake, and it is an emotional, split second decision.  Adam schemes and is given the chance to own up and apologise, an opportunity he doesn’t take.  He has to go.

…and Rose shines ever brighter.   RP

Author of windowsintohistory.wordpress.com Co-writer on junkyard.blog Editor of frontiersmenhistorian.info
View all posts by Roger Pocock →
This entry was posted in Companion Tropes, Doctor Who, Entertainment, Science Fiction, Television and tagged Adam. Bookmark the permalink.

3 Responses to Adam the Foil