Posted on March 7, 2019 by DrAcrossthePond

Today we will begin looking at an old favorite of mine.  Why this one though?  With all that we cover here at the Junkyard, why make Babylon 5 a focus?  Surely an anthology would be easier?  Or a more modern series perhaps?  Why some fairly obscure sci-fi series from the 90’s? 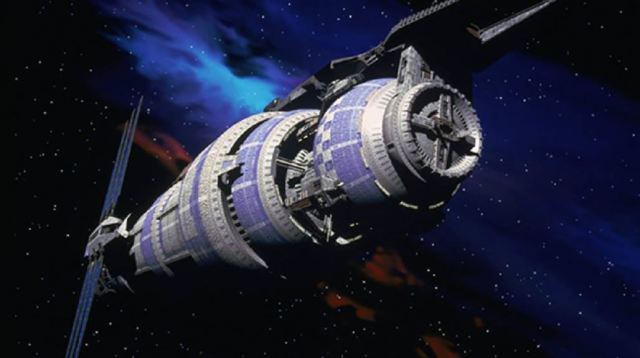 Having seen Babylon 5 three times already and preparing for a fourth viewing, the answer comes down to uniqueness.  B5, as it is affectionately called, did two things very few other shows have ever done in genre television: it told a story.  Well, to be fair, most television is about storytelling, but not in a very realistic way.

“But this is science fiction!  How can you say that?”  I hear you ask.

Some years ago, I bought a fan-made book called The Doctor and the Enterprise featuring Tom Baker’s Doctor on board Jim Kirk’s USS Enterprise.  Sometime after publication, it ran into issues with copyright infringement and had to be rewritten.  Kirk was now “The Captain”, Spock was “The science officer”…. Etc.  While this might seem minor, it’s very telling because most of the shows we watch on television introduce us to characters who stay in character throughout.  The Captain is always the captain.  The angry cop is always the angry cop.  The comedic foil is always the comedic foil.  But life does not work like that.  Life is a fire and every day is a hammer.  That might sound depressing, but I assure you, it’s not.  When I say “I’m not the man I was”, I mean that literally because life has honed me and changed me so much over the years that I am better now than I was 20 years ago and my hope is that I go on making a better version of myself every day.  That’s reality.  The point is, life changes us.  Most shows fail to acknowledge that.  Whether they care or not might be at the heart of the problem but I think that most writers fail to understand that their characters should go through an arc and change over time.

Babylon 5 was a series that showed people evolving and changing.  Life altered them.  In some cases, it helped improve them.  In some, well, you’ll have to wait and see.  The person that started out looking like a villain, may end up very far from a bad guy.  The caricature that was there for humor value might become something far more tragic.  Life is a fire and every day on that station was a hammer and the swords that were forged from that fire are some of the most enduring in science fiction history.  No television show ever worked quite the way Babylon 5 worked.

Babylon 5 also broke the mold in another big way.  As a site dedicated to Doctor Who, we’ve looked at every story in the series 55 year history and one major thing we find is how little actually makes sense.  Events from one story are utterly broken by another.  Even between 2 back-to-back episodes written by the same man, we see shocking oversights; things that should have been caught if the writer was even thinking about it!  This has plagued television viewing since the very start!  Even modern classics like Game of Thrones, Breaking Bad, The Sopranos… all critically acclaimed series which have suffered horribly at the hands of multiple writers.  One writer might focus on something that is never heard of again because it did not feature in the plans of another writer.  Remember the Russians in the woods of The Sopranos?  The comedic Fly in Breaking Bad?  Or how about the empty pockets in Doctor Who that one single story later contain glasses borrowed from a movie star?  (I won’t even discuss the physical distance covered in Game of Thrones’ penultimate season; a distance every other season went out of the way to indicate was so vast, it could not be traversed for ages…)

There are 110 episodes of Babylon 5 of which the creator and lead writer, Joe Michael Straczynski (JMS to us), wrote 92.  He was responsible for nearly every episode in season 2 and 100% of seasons 3 and 4.  Even the great Game of Thrones can only claim the same two writers for 70% of the series (51 of 73 episodes), while B5 had one writer for a staggering 84%.  That gave him the advantage of telling a story that he hand-crafted, undaunted by the networks that demanded 22-episode seasons.  And long before the interconnected story-telling of the Marvel cinematic universe, Staczynski was telling stories that folded back on themselves in complex and utterly fascinating ways.  That is, in a word, remarkable!  And of those not written by him, we get D. C. Fontana (writer of classic Star Trek fame, among others) and Neil Gaiman (need I say more?) and he personally checked to make sure each of those scripts tied in with his overall story.  Wow… I don’t think Chris Chibnall even checks his own scripts to make sure they tie in with the overall story!

So, why B5?  Because it was unique in television history and it’s a damned good series to boot.  With it returning to Amazon Prime and having just had a chance to meet Bruce Boxleitner (Capt. John Sheridan himself), I felt there was no better time to go back to a series and deconstruct it for the visitors of our Junkyard.  Welcome aboard the little space station that could….

5 Responses to Why Babylon 5