Mary and the Witch’s Flower (Review) 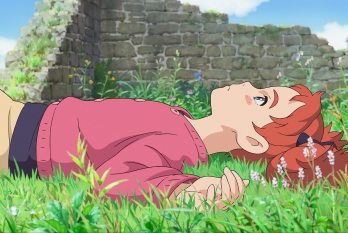 This one might leave you feeling a little flat.

In 2013 Hayao Miyazaki announced his retirement, and the following year Studio Ghibli effectively shut down.  Miyazaki has since come out of retirement (he likes to do that) and the studio is back up and running, but during that period of hiatus many former Ghibli staff went off to do their own thing.  One of the most notable films to emerge from that process is Mary and the Witch’s Flower, from newly formed Studio Ponoc, founded by ex-Ghibli producer Yoshiaki Nishimura.

The director is Hiromasa Yonebayashi, who also directed the sublime When Marnie was There for Studio Ghibli.  This is probably the most Ghibli-esque film you will find that was not actually made by Studio Ghibli, highly reminiscent of both Kiki’s Delivery Service and Spirited Away, but it lacks the appeal of either of those films.  Although it is solidly watchable entertainment, it feels a bit like Ghibli-by-numbers, like watching a Greatest Hits of Ghibli with the soul sucked out of it.  The thing about Studio Ghibli is that they kept doing something new, never seeking simply to repeat past triumphs.  This feels derivative in a way that no Ghibli film does.

To be clear I’m talking about the approach, rather than the subject matter.  I don’t mean derivative in the sense of the story idea, because this is an adaptation anyway, and Studio Ghibli did a few of those too.  Like Arrietty, Mary and the Witch’s Flower is based on a British children’s novel, the lesser known Little Broomstick, by Mary Stewart.  Yonebayashi really plays on the Britishness, with the locations thoroughly researched to appear as quintessentially British as possible.  For the English language dub, a cast of British actors was chosen, including Kate Winslet, Jim Broadbent and Lynda Baron.  Unlike the Japanese voice actors, the two children for the English dub are played by child actors: Ruby Barnhill and Louis Ashborne Serkis.  With the best will in the world, we almost never produce the calibre of child actors that the USA achieve, so let’s just be kind and recognise that they both do as good a job as could possibly be expected of them, while sounding very stage school, like any other British child actor.

This contributes to a feeling that you are watching Studio Ghibli doing Harry Potter.  I write that knowing that it’s an unfair thing to say, as Little Broomstick predated the Harry Potter books by a couple of decades – they were hardly groundbreaking, just extremely well-written.  But in this post-Potter world there is no escaping the been-there-done-that vibe we are going to get from watching a film about a young witch going to a school for witches and wizards, only to find danger and corruption lurking behind the scenes.  The backstory with Mary’s grandmother is also familiar territory for this kind of story.  I won’t deny that it is a very enjoyable film to watch.  For what it is, it is done brilliantly, and you can’t fault the artwork, which most definitely picks up where Studio Ghibli left off.  But that’s about it.  It’s a competent adaptation of a competent novel.  Not groundbreaking, just solid.  Thematically I found little to interest me.  So it’s undeniably a beautiful and entertaining piece of work, but for sheer charm and originality, I’d rather watch Kiki’s.   RP