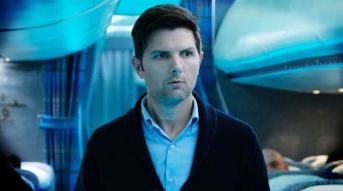 What do William Shatner, John Lithgow and Adam Scott have in common?  Well, probably plenty: they are all actors, all male, but more importantly for our article, they all had a nightmare on an airline.  No, I’m not talking about dealing with getting booted off a United flight!  I am talking about flying into the Twilight Zone with Nightmare at 30,000 feet.  Well, Shatner was a little lower in altitude: his was at 20,000 feet, but the point stands.  Shatner started it all in the original episode.  Perhaps the natural fear people have of flying lies at the heart of what made this a classic.  Lithgow’s version was a straight up reproduction of the original with updated effects and a better looking, if less iconic, creature.  Adam Scott however will experience a whole different kind of nightmare.

Once again, we have entered the land of both shadow and substance in the episode 2 of The Twilight Zone.  And like the first episode, it’s a mind trip.  Looking back on episode 1, I commented on the pacing: it was slow.  This is no quick burn either.  It builds, but that is exactly what it needed to do.  It is unnerving from start to finish.  Like Hitchcock, you know there’s a “boom” moment coming, but you don’t know when or how it will manifest.  This uses that tactic expertly.  But it hinges on a flaw.  Ok, so Adam Scott plays Justin who finds a series of coincidences surrounding his flight.  Then he finds an audio player in his seat front that chronicles the events of the flight he’s on.  Yes, unnerving!  But as he starts down the path of potential insanity, the question of what he’s listening to can be verified pretty easily if he just has someone else listen to what he’s hearing, to verify that this audio actually contains something strange.  The writer gets around this by having Scott offer it to the guy in the seat next to him who claims he doesn’t want to put that on his head because he doesn’t “want lice” but it ignores that there are others involved in this who might listen.

Ignoring that one, rather glaring, issue, the story plays out with increasing tension.  I am glad I’m not flying for a few more months.  I think to fly within weeks of this episode would be an unnerving affair.  I was tense all the way through!  The weird gremlin creature from Shatner’s version does make an unexpected cameo (and boy do I want one…) but it’s the end that is totally open to interpretation.  I refuse to do the spoiler thing: I give people a lot of grief when they do it, so let’s just say, I don’t know definitely if the ending is as cut and dried as they make it out to be.  Overall this was another successful entry into the annals of The Twilight Zone.  ML

This entry was posted in Entertainment, Random Chatter, Science Fiction. Bookmark the permalink.

2 Responses to The Twilight Zone: Nightmare at 30,000 Feet