When I read that we’d be returning to the Twilight Zone in 2019, it was an exciting prospect.  Like Black Mirror, this show allows us to look at our lives through the looking glass.  Star Trek, in 1966, also brought this idea home by telling allegorical stories far more concisely than anything on television at the time.  I’m reminded of one of my favorites for reminding us about the stupidity of judging someone based on the color of their skin: Let That Be Your Last Battlefield.  But what Star Trek did right was sharing the belief masked behind alien faces.  If the audience did not like the message, they could still enjoy the story for the action/drama it was.  The moment you strip away the allegory is the moment you go from Science Fiction story-telling, to having an agenda.  (This criticism is the same I have with Doctor Who; allow me to think, but try to shove an agenda down my throat, and you’ll lose me as a viewer!) 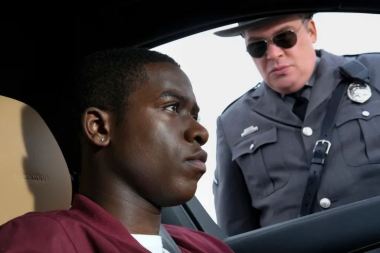 Damson Idris plays Dorian Harrison.  He’s having a nice meal out with his mom, Nina (Sanaa Lathan), on their way to his new college.  They encounter a cop, Officer Lasky (played despicably by Glenn Fleshler) who has some issues with the color of their skin.  When things go wrong, Nina finds that pressing the rewind button on her camcorder rewinds time.  Conceptually, this is a wonderful idea and opens the door for a lot of great drama but as tense as the episode is, it comes down to the horrible nature of this small town cop.  The episode is flawed and the concept utterly fails at one point when Damson is shot and Nina doesn’t think to rewind her camcorder.  Another moment, has mom and son walking to their car, knowing how Lasky feels about them and, instead of walking past their car when they realize the disgusting bigot is still in the restaurant, they fall right back into the same trap that he’s caught them on over and over again.

This all leads to the notion that to get to the college, Nina has to go back to her childhood home and ask for help getting there, and luckily there are enough back alleys and underground paths that no one would see them!  “Phew”, huh?  Hey, for the sake of entertainment and a good story, I don’t mind suspension of disbelief.  But like I said above, don’t try to shove an agenda down my throat.  Give me Bele and Lokai any day!  When Nina finally turns the tables on Officer Lasky, it’s after he has committed countless acts against this family but from his point of view, he has only done one thing, because she rewinds time over and over again.  This means, he hasn’t done multiple things; he has done whatever the most recent rewind leaves her with.  Yes, she has seen multiple bad outcomes, but he has only done one thing up until the point where she says…

“You’ve gone too far.  Harassing us, abusing authority.  You’ve been profiling us, targeting us, following us, shooting us, killing us… not anymore…”

So who is the “us”?  Yes, for the story, she means it as her and her son, but he hasn’t been doing those things.  He’s done a thing.  So the “us” loses the meaning and becomes a socio-political one.  My argument is not that the message doesn’t have meaning.  It that the forum is wrong.  The writer uses The Twilight Zone to make a social commentary; a valid and important one, but not for The Twilight Zone.  I tell my kids all the time: “Know your audience.”   My older son loves rap music and knows the lyrics.  I have listened to the stuff with him.  It’s not appropriate for some audiences. He knows the words; that’s fine.  I don’t even care if he were singing them.  I care if he’s singing them in front of his grandparents.  I care if he’s singing them in class when he’s supposed to be listening to the teacher.  All I want is for him to have the presence of mind to know his audience and judge accordingly.  If Jordan Peele is going to resurrect The Twilight Zone, I ask the same of him.  Mask the allegory behind the story.  The moment you make a social statement that is completely evident that it’s white cops against black civilians and we might as well be watching CNN!  Because, yes, it’s something we can get heated about and rage about and believe in… but isn’t this a bit overt?

Mind you, I’m not against the message!  Quite the contrary; it’s just that it’s a very big subject that shouldn’t be treated lightly, and I don’t think the Zone is the place for it.  Unless perhaps, it is exactly the place for it.  Perhaps the Zone was the place precisely because Science Fiction can do things other shows can’t.  With SF, we can say things and spark debate and hopefully engage in some really great discussions because we play in a safe place. Maybe it wasn’t the forum, maybe it was.  It’ll be down to the viewer to decide.

Was the episode good?  Absolutely.  Did all the parties involved keep me on the edge of my seat?  Yep!  And did I want to run Lasky over with his own car?  Hell, yeah!  Fleshler played a loathsome being who deserved a far worse fate than he gets.  He doesn’t get defeated in any real sense.  He loses face which will only make him a worse piece of trash.  The fact is, the “win” Nina and her son experience would probably be very short lived because these crooked cops would just wait for the students to leave the school; they’d drive around like vultures.  The fact that the story ends with a flash forward many years down the line just says they were really lucky.

It’s a big, important subject and worthy of discussion, but remember, we come here as fans of science fiction and thought-provoking drama; there’s no “right answer”.  We are here as friends.  Oh, but slightly less worrisome, for those keeping track, the classic icon that makes a cameo: the devil-headed jukebox from Nick of Time.  Brief, but it’s there!  Onto the next one: A Traveler…  ML

This entry was posted in Doctor Who, Entertainment, Science Fiction, Television. Bookmark the permalink.

3 Responses to The Twilight Zone: Replay