The Twilight Zone: A Traveler 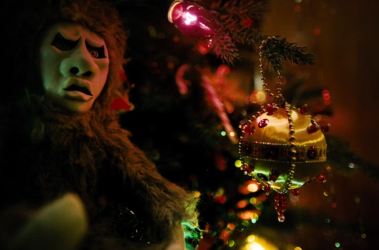 Now, this is more like it.  This is the sort of Twilight Zone I like to travel through.  I don’t want preachy, I want story.  I don’t mind allegory, in fact I love it, so when you’ve got a good story, you can add the preachy into the allegory and get away with it.  And what we have here is an allegory baked into a nerve-wracking story about paranoia, distrust, and human nature that had me on the edge of my seat for the whole episode!  Considering the source material, I can’t wait to see more like this!

While Greg Kinnear seemed to be the big name in this one, it’s Steven Yeun who steals the show.  Fans of The Walking Dead will remember him as Glenn Rhea.  (He knew enough to get out of that series while the getting was good!)  The premise of the story is that a local cop, Sgt Yuka, arrests her drunk brother knowing that in this small town of Iglaak, Alaska, sheriff Lane Pendleton (Kinnear) will pardon his crime as a Christmas Eve tradition, as he will be the only prisoner for the night.  But when she goes to release him from his holding cell, she finds another prisoner, the mysterious “A. Traveler”.  Traveler, dressed in immaculate pin striped suit and hat, claims to be an extreme tourist, playing on Pendleton’s ego to get released.  Once free, he then ingratiates himself into the office Christmas party.  What happens next is a re-imagining of The Monsters Are Due on Maple Street.  The townsfolk begin to prey on one another, dark secrets are revealed, and in no time at all, the natives want to beat one another to death.  Throughout, Traveler’s identity is “revealed” and we are left to wonder if there is any truth behind his words.  It’s a fair bet that the truth is out there, somewhere.

The episode is extremely tense and the viewer is left as paranoid as the townsfolk, not knowing who can be trusted.  Frequent power outages at the station coupled with some wonderfully atmospheric music ramp the anxiety up to 11.  There’s a moment where the Sheriff and Yuka enter the cell where Traveler is being held and think they see something unusual but this viewer saw nothing, and I wondered if I was just oblivious or if this was just really good writing on the part of the show making me think I was supposed to see something that wasn’t actually there.  The idea that we can start to have doubts about our friends and neighbors is not a new idea, but to play it to such a high level of tension is skillful.  I bought into it and wondered throughout if I was being manipulated like the Iglaak locals.

This new Twilight Zone seems to be a reworking of original ideas with new twists and this one was superb.  Once again, our “Nightmare” gremlin makes an appearance as does the Dummy from episode one.  The presence of both items makes one wonder if these stories take place in a contained universe.  (Next episode offers another hint, but I’ll get to that next week!)  Another interesting thing is that Jordan Peele, the Narrator, takes a whopping 10 minutes to make his appearance.  He has been outstanding as the narrator and though he gets less than 1 full minute per episode, I feel the show is absolutely his.  Each episode has gotten progressively better and this one is edge of the seat stuff.  I hope to see more like this: allegories hidden in good stories.  In the meantime, let’s see what happens when Star Trek’s Hikaru Sulu gets involved in politics in next weeks, The Wunderkind.  ML

Like Loading...
This entry was posted in Doctor Who, Entertainment, Random Chatter, Reviews, Science Fiction, Television. Bookmark the permalink.

1 Response to The Twilight Zone: A Traveler