My Teen Romantic Comedy SNAFU Too! 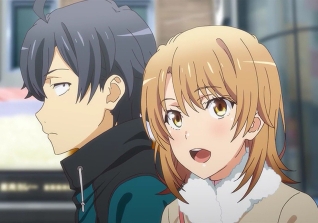 It’s relatively rare for a series like this to get a second season.  When I say “a series like this”, My Teen Romantic Comedy SNAFU is actually quite unlike anything else, but I’m talking about school-based anime with no supernatural elements.  Even ones with a strong individual hook to them such as Hyouka and Gamers! were given one season and then that was it, but this one returned for a second year, such was its popularity.  Oddly, it remains neglected for an English dub.

We continue with the same basic premise: social misfits working together in an after school club that exists to help others with problems, learning how to function as friends, perhaps moving towards something more than that, learning about themselves and dealing with teenage issues.  But this is quite a different series, because of how far the main characters have progressed since the beginning of the first series.  Hikki (as Yui affectionately and insultingly calls him) is growing in confidence all the time, and is able to interact with the opposite sex.  In fact, he is starting to become somebody whom others admire and respect, which is an odd vibe for all concerned.  He is simultaneously looked down upon and looked up to.  The best example of this comes from the most important character this season outside of the main group of three: Iroha Isshiki.  She comes to the club asking for help because she has been nominated to run for student council president as a prank, and doesn’t want to win.  Although she constantly views Hikki as a creepy loser, assuming everything he says is an attempt to hit on her (it isn’t), she also has a great deal of respect for his genius for problem-solving, and as the series progresses she is clearly developing feelings for him.

A slight disappointment for me was how much the series focusses on one long storyline, in contrast to the first series, which was composed of a variety of smaller stories.  The overwhelming focus is Iroha and the Student Council, and whilst that is always an interesting topic, bringing politics into a school setting, it does feel like there could have been a little more economy of storytelling, with events explored over fewer episodes.  Having said that, all the student council stuff is entertaining, particularly the guy who talks in management speak, trying to be inclusive of all views, and ending up getting nothing whatsoever accomplished as a result.

Over the course of the season, the main group of three face a crisis, and the group starts to fall apart.  There are a couple of reasons for this.  Firstly, their different methods for helping others creates a clash, and it’s a fascinating one.  Hikki constantly finds the most pragmatic solution to a problem, and it generally involves helping others and doing some harm to himself in the process.  He never considers his own feelings, and he sacrifices himself and his reputation again and again.  He gets the job done.  That might sound selfless and noble, but it’s a problem for his friends, particularly Yui, who is most open about her feelings for Hikki.  Watching him suffer makes her suffer as well, and she wants him to stop.

Secondly, there is a love triangle that threatens to break the group apart as well.  Yui makes her feelings for Hikki quite obvious, but she is also intuitive enough to understand that Yukino has feelings for him too.  All three of them are terrified that any change in the status quo will destroy the group, and it has become such a lifeline for them all that they cannot face up to that possibility.  It is kept ambiguous as to who might win Hikki’s heart out of the two of them, because his self-esteem is so low that he struggles to allow himself to believe something like that could happen.  There is a lot of angst about being genuine with each other, wanting something real.  In the end there are no easy answers, although the friendship between the three has strengthened by the end of the series, and that’s really the most important thing.  Right from the start we have been given shots of the club room, with Hikki sat at one end of a table, and Yui and Yukino separated from him at the other end.  Gradually the distance between them closes.  This is a series that is visually very clever.

There is no real resolution to the love triangle, other than a strengthening bond between the three main characters, leaving the viewers to go off to search for the manga series to find out what happens next.  But maybe this kind of story is better left unresolved.  It is all about the journey, not the destination.   RP

Update: since writing this article, a third series has been announced.  I will write about it for this blog as soon as I have seen it!

Update #2: and now a dub has been announced too!

3 Responses to My Teen Romantic Comedy SNAFU Too!