The Melancholy of Haruhi Suzumiya V 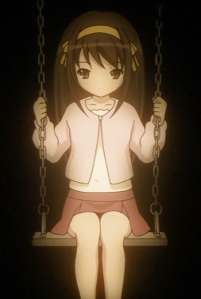 After another example of Haruhi debatably hearing Kyon’s thoughts, we’re into another episode that is heavy on the exposition, much like the third episode. And at last we have an episode devoid of any kind of sexual abuse, so I’m hoping that this will be one that Mike enjoys. In fact, there’s nothing icky at all this week, unless you count the very mild creepiness of the apartment block attendant who complements Haruhi. Instead, we’re into strong sci-fi territory. A new viewer at this point could be forgiven for assuming this is the kind of pattern the series is going to settle into, but the reality is that this kind of episode is going to be by far the exception rather than the rule.

I’m not a huge sci-fi fan, so I don’t really mind that, but as far as sci-fi goes this episode certainly makes things interesting. But first of all, we must acknowledge that the episode treads water a little at the start, with Haruhi’s rather narratively pointless quest to find information about Asakura. We already know why she has disappeared and we also know that Haruhi isn’t going to be told about the story behind it, so this just extends the dramatic irony from the end of the previous episode for a little longer. However, it does lead to Haruhi’s moment of depression, and a rather magical flashback sequence to her childhood, and the moment she went to a baseball game and realised the crowd of 50,000 spectators represented only 1/2000th of the population of Japan, let alone the whole world. To be honest, I suspect most people actually have a moment like this at some point in their lives, when they first realise just how huge the world is, before we even start thinking in terms of the whole universe. It’s all too easy to go all Bohemian Rhapsody and feel like nothing really matters at all. Haruhi’s frustration is beautifully underpinned by the train rushing past. All around her the world keeps moving on, while she stays still in her boring provincial life.

So we have progressed from observing Haruhi fail in her investigations, to seeing Haruhi’s depression (and note how well Wendee Lee tones down and softens the Haruhi voice in the dub, that Mike so dislikes), and then finally the episode shows us the consequences of her depression, with Koizumi taking Kyon into the “gap between dimensions”.

“Whenever Miss Suzumiya gets emotionally unstable it creates a closed space like this.”

To make matters worse, her anger manifests as the shinjin, giant avatars who destroy everything around them and enlarge the closed space. They remind me of the Daidarabotchi, a gigantic creature from Japanese folklore who shaped much of the landscape (see Princess Mononoke for a great example of an animated Daidarabotchi), although whether that was intentional or not I’m not sure. Either way, it makes for an impressive spectacle, and there are certainly some big ideas this episode, including the anthropic principle. I’m no expert, but I suspect Koizumi’s simplification of “I observe, therefore the universe is” fudges the principle somewhat. He cites the necessary narrow range of fundamental constants in the universe, but the whole point of the principle is to illustrate that this is unremarkable because the universe has to be compatible with any intelligent life that observes it. I don’t claim to have a perfect grasp of that kind of thing, but it’s just worth mentioning that one of the most valuable functions of sci-fi is to make people think, and this episode of Haruhi certainly does that.

Next week we’ll be looking at the big conclusion to the first and most dramatic story arc of the series. We will observe, and therefore it will exist.   RP

I go into this show with a sense of foreboding.  I can hear Phil Ken Sebben laughing that wonderfully maniacal “ha-ha-HAAAA” with almost everything that happens.  Those who don’t know the magnificent Phil Ken Sebben, you’ve never seen Harvey Birdman: Attorney at Law.  PKS, as I’ll call him, is voiced by Stephen Colbert.  He is known for saying an innocuous word only to realize it can be used in some sexual content, at which point he will laugh loudly only to end by repeating the word.  This is one of those things  that pop into my head while watching Haruhi.  There seems to be this overwhelming desire to have something sexual happen, but they keep it clean (ish), only to have a hidden or subliminal “ha-ha-HAAAA” moment that my brain picks up on over and over again.  Maybe I’ve been conditioned.  Regardless, I’m still horrendously creeped out by it in some cases, like when an old man tells high school student Haruhi, “you’re quite a looker…”  Although she just bows and thanks the man for his help, it’s in my head.  “Ha-ha-HAAA, sexy!”  Luckily the episode does not linger here and I do get what I want too.  Itsuki, another character with a great voice, tells Kyon about a closed reality and actually takes him there in a scene that would make Dale Cooper blush.

I have got to say, when Cooper entered the Black Lodge in Twin Peaks all those years ago, (not the bizarre mental devastation I saw on Showtime a few years ago) I was utterly and completely transfixed by the idea.  To this day, I can’t help but wonder if there’s a “weak spot” in reality that we can slip through into another plane.  I saw it in one of the greatest video games of all time, Star Control II and loved it there as well.  Hell, with all the Twilight Zone talk lately, the idea probably started with Little Girl Lost, when a little girl falls through her bedroom wall and into a strange pocket universe.  So Itsuki’s journey to this closed pocket universe is incredible.  It’s an episode with more exposition but this time it’s visual too, helping us penetrate the veil to see what’s on the other side.  (Ha-ha-HAAAA… penetrate!)  Of note, the music goes from incredible with an instrumental piece that ramps up the tension marvelously, to an idiotic jazz piece that does nothing for the scene unless we’re going to a club… and we’re not…, only to then come back to this astoundingly good choral chant.  The chant works phenomenally well for the scene when we see one of these giant creatures that begins to destroy reality.  How this will impact the real world is anyone’s guess.  Thankfully, Itsuki is one of a group of really casual heroes who will save the day.  I think of Mighty Mouse.

Haruhi ends up working on investigating the mysterious disappearance of Ryoko, and Kyon goes along, even though he knows full well what happened to her.  There’s a wonderful scene here as Haruhi walks away and Kyon debates about following but somehow her back tells him not to.  This just adds to the story though, because like us, Kyon does not know just what he should or should not say.  All he does know is that Haruhi seems to be capable of creating pocket universes that can be destroyed and may destroy our world in the process.  And it all started 3 years ago… (Ha-ha-HAAA.  Puberty!)

Is this show about the wackiest thing I’ve ever seen?  Probably.  (Oh, wait, no that was the reboot of Twin Peaks, which made me think I had a stroke and didn’t know how to watch TV anymore…)  Do I have a hope in hell of feeling comfortable when I put it on?  Probably not.  So rather than following my inner guide, I’ll take the advice of Phil Ken Sebben and try to laugh it all off with a quick “hahahaa”.  I will give it to the show: the mystery is enough to keep me watching, that’s for sure.  I just wish they made these kids college students; at least I wouldn’t feel so weird about it.  Ha-ha-HAAAA… weird.  ML

Read next in the Junkyard… The Melancholy of Haruhi Suzumiya VI

Co-writer on junkyard.blog. Author of windowsintohistory.wordpress.com. Editor of frontiersmenhistorian.info
View all posts by Roger Pocock →
This entry was posted in Anime, Entertainment, Reviews, Television and tagged The Melancholy of Haruhi Suzumiya. Bookmark the permalink.