Jamie and the Second Doctor liked to hug a lot.  Quite when this first started is difficult to say.  A lot of their early episodes are missing, and hugs don’t make a noise that can be discerned on audio!  But let’s start with a still from The Faceless Ones:

Before we start reading too much into this, there is something we need to acknowledge.  This kind of a pose is very useful for a director, because if the actors are close together it makes for a nice tight framing of the shot.  There is no such thing as personal space on television, because shot framing comes first.  I was just reading the autobiography of Rob Brydon and he recounts going to pieces during a Parkinson interview, sat almost nose-to-nose with his interviewer.  That’s television, especially in the days before widescreen.

…and sometimes we can just put it down to shoddy door technique:

That’s about all we can glean from their first season together, but when we get to Tomb, there is that amusing moment of accidental hand-holding as Jamie and the Doctor go through those massive doors for the first time.  According to anecdotal evidence, that kind of thing was a bit of actorly business, cooked up by Hines and Troughton, to get some humour in.  We should also not read too much into the hand-holding in The Dominators, when the Doctor and Jamie jump in unison to avoid completing an electrical circuit with their bodies.  At the time they are pretending to have a child-like intelligence, and this is a clever bit of child-like acting to go with that.  But it is during Season Six that Jamie and the Doctor get really touchy feely. 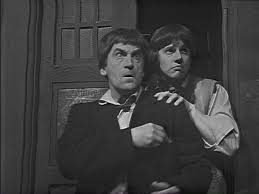 When characters have this kind of tendency, tropers refer to it as being a “cuddlebug”.  The origins of the term are unclear, although they go back to at least the 1960s, as evidenced by the Simon Sisters album Cuddlebug, with the first track on the album: Cuddlebug (The Happiness Blanket).  As for the word “cuddle” itself, it has similarly obscure origins, going back at least as far as the 16th Century.

So what’s the point of all this?  Why is Jamie such a cuddlebug?  Well, firstly we need to understand that what we are seeing is largely not going to be a writer’s choice.  Decisions like where actors stand in a shot will be made by directors in collaboration with actors, and body language is mainly going to be down to the actors.  Or at least, that’s a fair assumption I think.  And to disappoint the slash fiction writers straight away, the actors are definitively not trying to portray homosexuality, which was not even decriminalised until 1967 in Britain.  I don’t think any actor at the time was remotely capable of portraying homosexuality on screen with any less subtlety than exaggerated campness played for laughs.

So in modern parlance we instead have something akin to a “bromance”.  Jamie and the Doctor are best friends, and by Season 6 they have been best friends for a long time.  But if you look at the photos on this page you will see that they are often indicating times of fear.  Jamie is scared, so he grabs the Doctor.  That’s really the most important function of a cuddlebug in a show like Doctor Who.  It quickly and efficiently gets a message across to the viewers: this is frightening.

With a male companion such as Jamie, that becomes even more effective.  It was relatively rare to see two men in any kind of embrace on 1960s television programmes, and ideas of masculinity were strongly tied to bravery.  We were also not yet completely divorced from the realms of the British stiff upper lip, and added to that Jamie is a soldier from history and would not be expected to frighten easily.  So when we see him grabbing the Doctor in fear, that really helps to sell the moment, and we get a range of fear, from slight nervousness:

…achieved with a subtle clutch of a wrist… to serious concern: 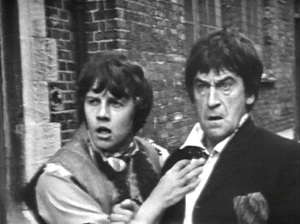 …to, well, maybe a bit of overacting:

…or just an excuse to hold on tightly to Wendy Padbury.  And who can blame him?  Sometimes being a cuddlebug comes with its perks.   RP

Author of windowsintohistory.wordpress.com Co-writer on junkyard.blog Editor of frontiersmenhistorian.info
View all posts by Roger Pocock →
This entry was posted in Companion Tropes, Doctor Who, Entertainment, Science Fiction, Television and tagged Jamie. Bookmark the permalink.

4 Responses to Jamie the Cuddlebug