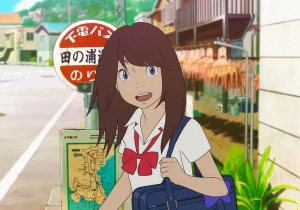 Nowadays I tend to watch a lot more anime television series than films, but I was drawn to this film by the cleverness of the plot.  The story takes place in two settings, one fantasy where magic is real, and one reality, with the two worlds interconnecting by means of a girl’s dreams.  As always with this kind of set-up (and I won’t bother listing the many excellent examples of this kind of storyline that range from episodes of Buffy to DS9) the question is which setting is real?  Are the dreams just dreams, or is Kokone really crossing over into another world when she sleeps?  It is not straightforward, and what she experiences cannot be dismissed as “just dreams”, because she learns information in her dreams that helps her in the real world, so something more complex is going on than simply a girl having fantasy dreams.  I won’t blow the revelation of how it all intersects, but let’s just say it was far more clever than I had expected the film to be, when I read the synopsis.

Each character in the real world (Japan) has a counterpart in the dream world (Heartland), and their actions in one world mirror their actions in the other.  There are exceptions, and one major character doesn’t have a counterpart in Heartland, which is one of many clues along the way to what is actually going on.  I’m not a huge fan of fantasy worlds, but Heartland is a fascinating place, where magic has been superseded by technology.  It is a society built on the importance of the motor car, to the extent that traffic has ground to a halt.  Kokone’s counterpart in Heartland, Ancien, has magical powers, but using them is strictly prohibited by her father, the king.  In an interesting merging of magic and technology, magic spells are cast by typing them into a tablet computer, or typing them on a typewriter.  Heartland is under threat from giant monsters called Kaiju, which the King tries to fight with technology, although Ancien’s magic is the key to fighting the monsters.  I suppose it could all be read as a metaphor for the struggle between tradition and technology.

I found the real world segments more enjoyable and exciting, although the one plays into the other constantly anyway.  Of course, there has to be a romantic element to this kind of film, but its relatively low-key and innocent.  More important in terms of caring about the characters is the relationship between Kokone and her father, which is in need of some repairing.  I wouldn’t exactly say it is a broken relationship, because the love between them is always there, but her father has become eccentric and withdrawn since the death of his wife, communicating with his daughter by text wherever possible rather than actually speaking to her.  This has given her a strong sense of independence, but nothing could prepare her for the ordeal she has to face when her father gets arrested, and some very dangerous people break into her house, looking for something of his.

It’s a strange mixture of a film, with elements of thriller, romance and fantasy, but those elements are beautifully knitted together to form a coherent picture.  When you get to the end, you’ll probably want to watch it a second time to fully understand everything that happens, once the key to Kokone’s dreams is revealed, but that’s fine.  Napping Princess is a film that’s worth watching twice.   RP

Author of windowsintohistory.wordpress.com Co-writer on junkyard.blog Editor of frontiersmenhistorian.info
View all posts by Roger Pocock →
This entry was posted in Anime, Entertainment, Movies, Reviews and tagged Kenji Kamiyama, The Napping Princess. Bookmark the permalink.