The Boredom of Haruhi Suzumiya 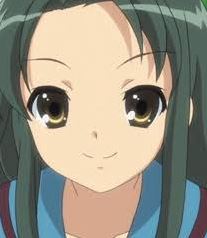 After the drama of the last episode this is much more of a lighter, fun one, and that’s actually going to set the tone for most of the rest of the series. The Boredom of Haruhi Suzumiya might be a move towards a more slice-of-life style of storytelling for the series, but it is my favourite episode, and one that I have watched several times, because it just makes me laugh so much. Nagato making the ball deviate in impossible directions and throwing the ball with enormous force, with just a little flick of the wrist, made me laugh out loud the first time I saw it.

We are starting to follow what will become the default pattern for the series: Haruhi gets an idea into her head and drags everyone else into her latest mad scheme. This week she wants to raise publicity for the SOS Brigade by winning a baseball tournament.

Before we get to any of the game play, there is an important bit of business in the club room. Haruhi’s abuse of Asahina is taken to new levels, nibbling on her ear until she passes out, and then dropping her limp body when she gets distracted. It’s a moment of visual humour, but again it’s a bit uncomfortable to watch. As Kyon says, “Haruhi thinks of her classmates as objects”. He has a problem, because as much as he wants to defend Asahina, he now knows that it could have consequences. Upset Haruhi, and he might just end up destroying the universe. But we are moving in the direction of Kyon increasingly trying to protect Asahina, whatever the consequences, and when he sees her being hit by a barrage of balls from Haruhi he steps in. This marks the beginning of a change in Haruhi’s mood, and that’s a problem.

“A closed space larger than anything we’ve seen before has appeared.”

We get to the point where the fate of the universe literally rests on the result of a baseball game. Things aren’t going to plan for Haruhi, and she’s falling into a depression. As usual, Kyon is the key to her happiness. Koizumi doesn’t mention his protective behaviour towards Asahina, but that’s clearly a factor. More importantly, Haruhi actually wants Kyon to be the hero, and he’s failing to perform like the talented sportsman she expects her man to be.

The episode really drives home the point of how brilliant Haruhi is, because she nearly does the impossible here without any help. She puts together a team consisting largely of people who are useless at baseball, and for a while provides a genuine challenge to the favourites to win the tournament, until they realise her sporting brilliance follows a predictable pattern. Then, her plan B is to distract the blokes with cheerleading outfits.

“Adolescence is so predictable.”

When Nagato steps in to help we then get to see the extent of her abilities. I’ve often mentioned on the blog how sci-fi is nothing more than fantasy with a veil of technobabble, and here’s a good example. Nagato might be an alien, but she is functionally a magician, casting her magic spell on the ball, or perhaps the atmosphere around it.

The fun of Haruhi of course is that all this craziness surrounds Haruhi, and it is exactly what she wants to find, but she never notices. As Koizumi pointed out in a previous episode, she has a practical side, and that gets in the way.

Kyon’s little sister has a bigger part to play this episode, as the deliberate handicap in the team, although they seem to have plenty of those already. Poor Miss Asahina can do little more than stand with the bat and shake in fear. But there is somebody else who comes close to challenging Haruhi’s enthusiasm, if not quite her abilities: Tsuruya. This is her introductory episode, and Kyon raises suspicions about where she’s suddenly appeared from as Asahina’s previously unmentioned best friend. She’s an absolutely fascinating, quirky character, and doesn’t seem like the sort of friend the quiet Asahina would gravitate towards. In the original Japanese language version she has an unusual speech pattern caused by her prominent canine teeth, but this is lost in the dub, although Kari Wahlgren does a great job of bringing her hyperactivity to life. Like most characters in Haruhi, there is more to Tsuruya than meets the eye, although a lot of her character development features in the later volumes of the manga, which were disappointingly never adapted for the anime.

Finally, the series once again plays its favourite trick on us. Having thrown in plenty of Haruhi’s bad behaviour, she still manages to win over our hearts and Kyon’s at the end, just by turning her pout into a smile.

“I guess if you’re alright with it then oh well.”

But will that winning smile give her a free pass to keep inflicting her torments on poor little Mikuru Asahina? Time will tell. RP

Weirdly, episode 7 shows up on the BluRay with the name “The Boredom of Haruhi Suzimiya”.  I should have anticipated a Baseball theme because I find that one of the universe’s slowest games, right alongside Snail Racing, Turtle Marathons and the ever popular No-legged race.  What surprised me was that Baseball was the cure for boredom for Haruhi.  Life in Japan must be a very different existence to the one I grew up with; baseball was not typically the cure for boredom.  But what makes this baseball game so interesting that there’s a bit of magic and a ton of humor.

It should be remembered that when Haruhi is bored, pocket universes can be destroyed, so it’s a good idea never to allow her to have a slow day.  If baseball is her balm of choice, it’s time to play baseball.  When Haruhi tries to communicate with her team, “it looks like she’s casting a spell”.  Actually, the line that got me was “Is she trying to reduce the other team’s magic points?”  This is actually pretty ironic because many of the little hand gestures used by actual baseball players are no different.  Think about the comedy The Naked Gun which goes out of its way to mock baseball hand gestures.  I’d go so far as to  argue that Haruhi looked better doing it as the animation just kept looping for so long.  It defied expectation too: it was like the animator knew they should have cut the scene but intentionally kept her doing her dance-y thing, reducing the other team’s magic points.  I had to laugh as Yuki’s mouth would move at extraordinary speed to make things happen but no sound would come out.  How hilarious when she makes the slightest flick of the wrist, containing so much power, or a ball suddenly change direction to go around a bat.  Some of those moments had me laughing heartily!

After episode 6, this was a let-down in terms of story, but made up for it in terms of humor and fun.  When I watched One Punch Man, there were moments that had me laughing so hard, tears were running down my face.  This episode pulled the same clever stunt.  Somehow even the lewd behavior in it didn’t offend but I guess that was probably because it hit too close to reality to be criticized.  The cheerleader scene is there to distract the other team, which it does successfully, but I ask myself, isn’t that what they do anyway?  So I can’t criticize Suzimiya for her strategy; she’s playing by the same rules as most sports.  This episode was a fun filler as I am sure the book on the bookshelf was equally just fun filler. I noticed it was in English and titled “Master of Space”.  Probably nothing, but it’s the sort of thing I do notice.  Now it’s time I cast a spell and bring on episode 8…  ML

Author of windowsintohistory.wordpress.com Co-writer on junkyard.blog Editor of frontiersmenhistorian.info
View all posts by Roger Pocock →
This entry was posted in Anime, Entertainment, Reviews, Television and tagged The Boredom of Haruhi Suzumiya, The Melancholy of Haruhi Suzumiya. Bookmark the permalink.