Whatever Happened to Sarah Jane? 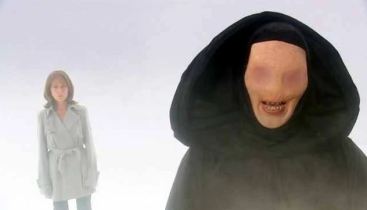 In writing last week’s Warriors of Kudlak, I mentioned that the series was still firmly in a safe place for kids.  With this week’s Whatever Happened to Sarah Jane?, we begin to see just how solid the story telling can be and I am not so sure it’s as kid friendly as it had been.  That said, I’m extremely happy with the direction it’s going!  Written by Gareth Roberts, we have a powerhouse story with a terrifying villain, The Trickster, who plucks Sarah Jane Smith out of time on the eve of an asteroid strike that can wipe out mankind.  Without Sarah Jane and Mr. Smith, there is no way to stop the impending cataclysm.  Worse, no one remembers Sarah Jane… except Maria.

First of all, let’s talk about Amy Pond.  Why Amy?   Because we meet Amy as a child and we know the person she obsessed over, the Doctor, is real.  When he leaves her and appears over a decade later, we find out that Amy was devastated by his absence and she tries to bite her therapists because no one believes her claims about the Doctor.  In this story, we see Maria as she goes through that same ordeal.  See, Amy we saw after the fact.  Maria, we get to see as it’s happening.  The nature of these 2-part stories is that there’s not a lot of room for building up on the idea, but the fact is, Maria has to convince her dad that the neighbor he remembers is not the right one.  This is exactly what Amy would have gone through for years, while Maria only has to live with it for a day, and we see just how traumatizing that day is!  To add to the horror of the story, after Maria is whisked away to the void, her dad, Alan, is left with the memory of his daughter but his ex-wife insists there was no Maria either.

This is heavy stuff; what classic Trek may have called “cerebral”.  Chrissy, Maria’s mom, even says that maybe had she had a daughter, she and Alan would not have broken up.  It’s powerful writing.  For something this powerful, you need a villain that’s up to the challenge.  The Trickster is a terrifying one.  His eyeless face and fanged teeth are a nightmare to behold.  The episode echoes the events of Turn Left which was broadcast a year later.  In that story, the Doctor references the Trickster’s Brigade, of which the time beetle appears to be a member.  Presumably the Graske are also a part of this force.  They all seem to be intent on destroying the reality we know even if it means destroying the earth.

The asteroid ends up being little more than a means to up the stakes, but taking Maria back to meet Sarah Jane in the 1960’s is inspired.  Maria has to deal with the sudden change in where she was, but it’s nothing by comparison to the void, the vast nothingness, where she was left with Sarah Jane.  Of note, the 60’s versions of Sarah Jane and Andrea both recognize how out of place Maria is because of her clothing.  It’s another mark of a good writer!

But I could not watch the episode without some small gripes.  First, why does Sarah Jane trust Maria the most?  She was told to give the magic memory box that keeps her alive in Maria’s mind to the person “she trusts most” but why wouldn’t that be Luke?  She doesn’t know any of these children that well but at least Luke is being raised as her son.  Based on her list of accomplishments, she mentioned the first three stories (Bane, Slitheen and Gorgon) implying to me that this story takes place very early in their time together.  So, why Maria?  My next annoyance is with Andrea Yates.  Jane Asher plays her incredibly well and I really did feel for her even as she goes further down the rabbit hole of bad decisions, but it wasn’t anything to do with the character or the actress; it was her name!  Doctor Who has so many opportunities for world-building yet it just slips through their fingers like sands through an hourglass.  Yates was the name of a certain Captain that Sarah Jane was fond of during her early UNIT days.  Hell, the episode goes out of its way to focus on a book about UNIT so there’s an “in”.  Why not make Andrea part of Mike’s family, maybe a sister or something, and add a level of tension to the story.  If Sarah Jane had died, Mike’s sister would have lived… now Sarah Jane (and the audience) know the stakes have just gotten even higher!

A few nice touches that warrant comment.  The song “Always something there to remind me” is a genius touch as Andrea is reminded of her mistake all those years ago and she can’t get away from it now.  And the Trickster’s comment to Sarah Jane might just as well have been addressed to Lis Sladen herself: “Your life was so important.”  Lis may be gone in the real world, but Sarah Jane will live on.  I am glad this episode was the one that focused on the power her life had, both in the fiction of the series and the reality of fandom.  ML

Like Loading...
This entry was posted in Doctor Who, Entertainment, Random Chatter, Reviews, Science Fiction, Spinoffs. Bookmark the permalink.

1 Response to Whatever Happened to Sarah Jane?