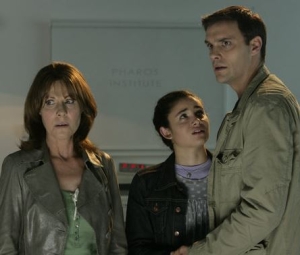 The end of Whatever Happened to Sarah Jane? leaves us with a surprise: Alan, Maria’s dad, has discovered the weird and wonderful world that Sarah Jane inhabits.  Will this be something along the lines of a Chris Chibnall series, where events from one episode don’t carry over to the next?  Luckily not!  The season finale of SJA is The Lost Boy and it opens with Alan addressing his concerns about his daughter’s safety around Sarah Jane Smith.  He opts to put the house on the market.

Ironically, the day I started writing this, my own sister posted something to her blog about parenting (external link): it’s no joke and it’s not easy.  Maria doesn’t want to move because she has experienced the unimaginably amazing with Sarah Jane, but Alan wants to protect his daughter from harm.  His reaction, wanting to put the house on the market, is normal.  Perhaps less normal is following his daughter into his neighbor’s house and stalking all the way up to the attic.  Still, Sarah Jane understands the importance Alan places on his daughter and doesn’t mind.  In fact, she supports Alan.  Thankfully, like what my sister said, it’s hard to make a decision when you know it will make your children feel bad, and Alan proves to be a great dad; he just has to get used to the weirdness.  It’s not until the second half that he proves how great he is.  (Like our own dad, as my sister may recall,) Alan goes with Maria to investigate the disappearance of one of her friends, rather than allow her to go alone.  The importance of family surrounds this story.

In fact, when it’s discovered that the genetically-created Luke might be the child of other parents, Sarah Jane is investigated for possible kidnapping.  She explains to Luke that the family who lost him loves him and she has to accept that her adopted child has to go back to his real parents.  This is heartbreaking but one wonders, as a Season One finale, is it possible that Luke really was being written out?  Was there even going to be another season?  Would it really end this way?

Sadly, 13 minutes into the episode, it’s made all too clear that the family who claim Luke is their own are actually aliens.  Slitheen to be exact.  That reveal came far too early but then, this was aimed at children.  It would have been a tough sell to the younger audience if they hadn’t made the monsters show up early.

Of the fun things in the episode, I enjoyed pausing on the sheet of paper with Sarah Jane’s credentials which state that she was a government agent during the “60’s, 70’s, and some would say, the 80’s”, thus furthering the “UNIT controversy”.  A return to Pharos is wonderful, as it was the Pharos Project that ended Tom Baker’s tenure as the Doctor.  And Chrissy’s inability to remember Contrary Jane’s name is humorous.  On the blundering side, when Sarah Jane talks to the Slitheen boy (while still in human skin), the camera flips to the front of a board and to the back of it, but it’s clearly see-through from the back, while white from the front.  And the Slitheen child runs around looking up all the time because the eye holes are clearly in the neck.

Possibly the most fun comes when K-9 appears to save the day from Mr. Smith, Sarah Jane’s now-rogue computer.  Once again, as a season finale, one wondered if Mr. Smith would stay as a part of the series.  K-9 unfortunately goes back to the safe in the … other universe… where he still works to … what?  close a black hole?!  I have no idea what he’s up to in that safe.  But I do know there is NO way Sarah Jane could have opened the combination with her back turned to the dial!

The only real issue I had with the episode, however, was Chrissy.  In part one, she calls the police because she thinks Sarah Jane is a kidnapper.  After the moon almost destroys the earth, Luke is back with Sarah Jane and Chrissy just seems to accept it.  All she has is a brief discussion with Alan to explain that she was wrong, but after that she just assumes Luke belonged with Sarah Jane!

One of my favorite observations about the episode was how Sarah Jane behaves without the children around.  It’s every bit how the Doctor behaves when he hasn’t any companions!  The episode ends with a wonderful monologue by Sarah Jane, “life on earth can be an adventure too.  In all the universe, I never expected to find a family.”  It’s a lovely sentiment!  And considering my sisters blog being mentioned, for me, in all the universe, I never could have expected that my sister (who was my Sarah Jane when we would play as kids) would have a Luke of her own.  Life on earth is an adventure.  You never know where it will take you.  Season One was a fantastic season and ended on a very happy note.  I’m looking forward to starting Season Two…   ML

1 Response to The Lost Boy