Posted on August 1, 2019 by DrAcrossthePond 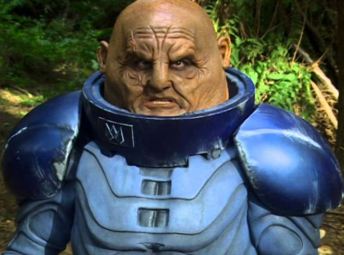 In keeping with the big themes that have cropped up over the last few weeks, “kids show” The Sarah Jane Adventures has one more ace to play.  This time, Maria’s dad is offered the job of a lifetime, but it requires moving to America.  Will Maria and her dad leave the show at the start of the season?  Or will the Sontaran put an end to her plans the hard way?

The episode opens with Maria reminiscing over the last several episodes.  She mentions only creatures from the stories we’ve seen, giving some credence to the idea that these are the only ones that have taken place.  There are no “missing adventures” waiting to be told.  (This idea is made more clear at the end of the episode when Maria looks at the artifacts in Sarah Jane’s attic and they are all items from the last several episodes.)  So we have followed Maria’s journey and we are facing the idea of a conclusion.  But it’s a season opener, so we can predict that things will fall through.  Not unlike the episode ending with Cog, the Sontaran, shooting Sarah Jane: we know she’s not dead!  Duh!  Equally we know Maria won’t leave.  But it’s a big deal as she tries to come to terms with the idea and what it would mean to leave her life and her friends behind.  For a kids show, it’s tackling a lot of big themes.  But it has its issues…

So let’s go over the little things that make my head hurt.  Like those pesky Cybermen infesting any ship with “Silver” in the title, Sontarans know to land in places that suit them.  Do they land in Ireland near the Giant’s Causeway?  Hell no!  They land in Goblin’s Copse, because why not?  Let’s keep it easy for the humans.  You would not want them landing in Princeton, NJ because, stick with me here, they are not princes!  (Only Orson Wells had aliens land in Grover’s Mill.  (If it were up to Doctor Who writers, the only invasion there would be by a muppet named Grover!  Honestly, this isn’t rocket surgery here, you know?)   Also, if the Sontarans can cloak, why did they need Atmos during David Tennant’s two part story?  (We learn that Cog is a survivor from that story and he’s out for revenge!)  Isn’t that unsportsmanlike?  And these almighty warriors literally have Luke, Clyde, and Maria running down an extremely narrow hallway, but totally fail to shoot a single one of them.  (Probably the scar on his face; he can’t hit the broadside of a barn with that scar by his eye!)

On the plus side, we get some humor from Chrissy as she yet again has alternate names for Sarah Jane (Calamity Jane and Mary Jane).  Also Alan’s reluctance to ask Mr. Smith for help is comical especially because, when he does say the words, a balloon is sent spiraling into the air, as if to say “congrats, you did it!”  But this also leads to a gross oversight: Mr. Smith is active but fails to comment on Chrissy’s arrival in Sarah Jane’s attic.  (Did he really not know to tell Alan that Chrissy had entered the room?)  Alan, however, nails a plausible excuse for it all: it’s an RPG that he and Maria are playing.  Brilliant.  Shame his mouth twitches and Chrissy knows it.  But as I watched this, and the episode ends with Chrissy being fooled by Alan into thinking none of the events took place, I was thinking: “so now Alan’s mouth did not twitch now?  How convenient!”  But Chrissy whispers to Sarah Jane that she does remember it all.  I thought that was a nice touch and I give credit to writer Phil Ford for not overlooking that seemingly minor point.

Overall, it’s a fun season opener … that actually made me tear up.  Why?  Because I was wrong: Maria and her dad are moving to America.  Clyde, Luke and Sarah Jane have to say a teary goodbye to their friend.  I truly did not see this coming for a season opener but in some ways it makes far more sense than one might, at first, realize.  What happened at the end of last season is that in story 5, Alan learned about Maria’s involvement in terrifying events.  By story 6, he’s thinking about selling the house but relents to Maria, knowing how important it is to her to stay.  But would it be out of the ordinary for him to start looking for jobs overseas?  As a father, he could turn down the job if Maria really did not want him to take it but he knows his daughter.   He might have guessed that she would acquiesce to moving to give her dad a better life because of the kind of girl she is.  And besides, how much better for Alan if the abusive Chrissy is unable to show up every time she has a whim?  All in all, it’s a good choice for Alan to make the attempt: a better job, safety for Maria, and an opportunity to avoid Chrissy: win/win/win!  The questions remains: how are we to continue without major cast members for another 5 episodes?  Alan and Maria were excellent characters and Chrissy added a sense of humor to the show, so one asks: how on earth can the show go on?  I guess we’ll have to wait and see… ML