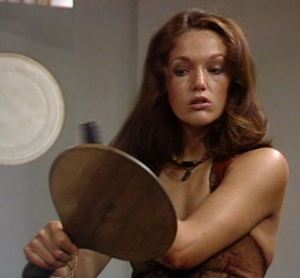 I am deliberately going down the obvious route with Leela today, but not because I support the idea of Leela as a “noble savage”.  In fact, I want to deconstruct the whole idea.  I am not sure when the expression was first used to describe Leela, but it seems to be one of those things that have been around for ever, a bit like describing the Second Doctor as a “cosmic hobo”.  Certainly by the time I started reading about Doctor Who in books and magazines in the early 90s the description of Leela as a “noble savage” was already deeply rooted, to the extend of being used almost without thinking about what exactly it means.

“Noble Savage” is genuinely a character trope, and one that extends far beyond Doctor Who and predates it by at least a century.  But it doesn’t quite fit when you look at exactly what it means.  The excellent TV Tropes website, despite identifying Leela as an example of the “noble savage”, describes the trope in a way that doesn’t seem to fit her particularly well:

A character who is, due to their race or ethnicity, a member of a barbaric or savage tribe (or a group simply perceived as such by others), and because of it portrayed as nobler or of higher moral fibre than the norm.

I think at most we can argue that is only half right for Leela.  A “member of a barbaric or savage tribe” maybe (and we only narrowly escaped that point being rammed home by Leela being a companion in blackface), but is Leela ever portrayed as “nobler or of a higher moral fibre than the norm”?  I don’t think so.  At least, not on television.  Big Finish’s older version of Leela in their Gallifrey series does actually fit the mould a lot better.  But Leela on television regularly has to be stopped from killing anyone she perceives as an enemy, and in fact does kill on several occasions.  Surely being a killer is about as far away as we can get from having “a higher moral fibre than the norm”?

So maybe it will help to look at the words themselves instead.  Cambridge Dictionary describes “savage” (the noun, not the adjective) as “a person whose way of life is at a very early stage of development”.  Although things have actually come full circle for Leela’s tribe, following a period of devolution, that fits the bill reasonably well, although it’s important to remember than the word has some pretty revolting pejorative connotations and nowadays should surely never be used to describe anyone in the real world.

As for “noble”, there are a couple of possibilities:

1. moral in an honest, brave, and kind way.
2. belonging to a high social rank in a society, especially by birth.

#2 clearly doesn’t fit.  As for #1, Leela is definitely brave and honest.  “Kind” is fair enough too, but does this all add up to “moral”?  She rarely stands as a contrast to the alien Doctor in the way that many companions do, so she is probably one of the least suited to fit this description.  It’s hard to understand Leela in terms of being “moral”, as a companion to an “amoral” or “immoral” Doctor.  And surely the moment she becomes his companion the “savage” description fades away quickly.  In fact, she is one companion who is astute enough to see through the Doctor’s bluffing, showing off about the nature of the TARDIS’s dimensions, something Ian fails to do in comparison.  Talons goes down a rather nasty route of educating the savage, but in the end it only results in making Victorian manners look rather quaint and a bit silly.  Does Leela’s ignorance of etiquette make her a savage?  I don’t think so.

Looking at the history of the trope itself, an early influence on the whole concept was Tacitus, who wrote in Germania about the German tribes who existed beyond the boundaries of the Roman empire.  Although he stopped short of making direct comparisons of the “they are better than us” variety, he did praise several of their characteristics which were lacking in Rome, sexual morality in particular.  But it also extended further than that, to hospitality, bravery and a simplicity of lifestyle.  Romans traditionally sought to see these qualities in themselves, and they were idealised by philosophers in particular, but the reality of the Empire at the time failed to live up to the ideal standard.

And maybe there’s something of that vibe in the Doctor/Leela relationship.  Maybe the Doctor never quite lives up to what he would hope to be his ideals, his morality.  Maybe his ethics are really a sham, and he merely keeps his own hands clean by weaponising others, as Davros suggests in Journey’s End.  Perhaps Leela is the one who is truly “noble”, plain and straightforward in her beliefs, and honest enough to kill with her own hands when the situation requires it, unlike the “Lord” of time, who uses the hands of others.  But a “savage”?

One of my least favourite lines in all of Doctor Who is the Fourth Doctor’s final words to Leela.  The Cambridge Dictionary describes the adjective “savage” as “very serious or cruel”.  How’s this for cruelty:

The magnificent Leela, or a man who defines her with a mildly xenophobic term that reduces her to nothing more than her background?  I know which one seems “savage” to me.   RP

Co-writer on junkyard.blog. Author of windowsintohistory.wordpress.com. Editor of frontiersmenhistorian.info
View all posts by Roger Pocock →
This entry was posted in Companion Tropes, Doctor Who, Entertainment, Science Fiction, Television and tagged Leela. Bookmark the permalink.

1 Response to Leela the Noble Savage