Posted on August 13, 2019 by DrAcrossthePond 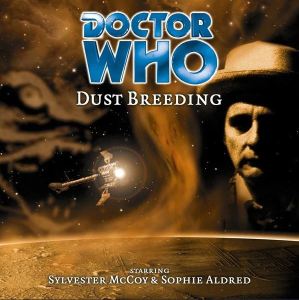 It should go without saying that voices are very important in audio stories.  If you have good voice actors, it can make all the difference.  When I started Dust Breeding, I avoided spoilers (including even checking what story I was up to) and since it’s been 19 years since I last listened to this story, I did not recall who or what was coming.  When I heard a voice I recognized, I didn’t think much of it with the exception that it sounded muffled.  When it was revealed the voice was behind a mask, I gave Big Finish credit: man, they had me thinking he was wearing a mask even before it was revealed!  That was masterfully done. The character, Mr. Seta, was wearing a mask… hmmm.  And then it hit me!  Mr. Seta… M.R.S.E.T.A… <scramble, scramble> M.A.S.T.E.R.  Holy cow!  It was the best sounding Master of all: Geoffrey Beavers!  And I was loving it.  Until part 4 when all is revealed….

Did the writers of Doctor Who pre-New Who not understand that this was a show about time travel?  The monster-being-manipulated-by-the-Master of the story (you know, because that happens a lot and is classified differently from a stand alone monster) is called The Warp Core.  (Obviously this monster was a fan of Star Trek!)  And it has … look, if you’re not sitting down, sit down now; this is the dumbest thing I’m going to have to admit about this story…  It has reverted the Master’s body back to his pre-Traken body.  WHY???  Why couldn’t the Doctor just have met the Master prior to the Traken event?  It makes no sense that they needed to encounter one another again after Survival-Master?!  And how/why would it even do that?  Why not revert him back to the first Master?  And I love the dialogue: “You’re too late Doctor; I’ve already won!”  Look, who says that?  How about “I’ve already achieved what I set out to accomplish.  There’s nothing left for you to stop!!”

Then there’s the Krill.  Pretty sure that’s a race from Star Trek too, but I could be wrong.  They were encountered before by Ace and the Doctor.  When?  Who knows.  (A little research shows it was in a novel called Storm Harvest, but having never read it, as I’m sure most listeners had not, the continuity factor meant nothing!)  These are creatures that are afraid of Dust, because… yeah.  But they are hyper-ferocious and scary.  In fairness, I did notice the picture of McCoy facing off against one of these creatures on the inside cover of the CD, and I was immediately reminded of an old Outer Limits monster and it did have a high creepy factor, but I didn’t notice that until over half-way through listening to the story.  But did that make it better?  Not really.  In fact, no, not at all.  They feature too infrequently and when they do, they are mindless creatures that attack and eat.

Bev Tarrant makes a return from The Genocide Machine  and that was a nice touch.  It wasn’t like she had to be a returning character, but Louise Falkner does a great job as Bev and it does have the feeling of seeing, or hearing, an old friend again!  Speaking of old friends, Caroline John is back on Doctor Who as Madame Salvadori (great name for an art lover) but I only found out she was in it when, at a traffic light, I picked up the CD case and looked at the cover and noticed her name.  When I realized she was playing the Eastern European woman, I was stunned!  She was doing a great job with it, but like the Master says, her voice was annoying in a way that nails on a chalkboard tend to be.  So, I can acknowledge her skill as a voice actor without loving the character she played.

And then there’s the plot itself: the Doctor wants to steal the Scream (the painting by Edvard Munch) before it goes missing under mysterious circumstances, but the Warp Core is in it and is going to fight the Krill on a planet that has to be blown up because the Warp Core is so powerful that it will destroy everything, but not dust… because… something… or maybe something else… but the Master can’t control things and has to run off in his TARDIS that still looks like a column…  And … WHAT?!  I was so enjoying hearing Beaver’s Master but by the end I was so confused by what I was listening to that I actually put this as one of my least liked stories so far.  And why does the Master’s TARDIS have to look like a column again?!  This is AUDIO!  It could have looked like a shoebox for all we would have known.  But they went out of their way to say it still looked like it did on the show, which was idiotic!  Mike Tucker, come on!  (He’s the writer of this story, by the way!)

Yeah, I love continuity, so mentioning the Mona Lisa from City of Death or the Teraleptils from The Visitation does make me happy but throwing in references does not make for a good story.   And I typically do like McCoy but he overrrrr rrrrrolls his rrrrrrs so much that I found myself trrrrrrrrrying to rrrrrrrrrroll mine just to see how much fun I could have with it.  And I found it was fun, but I wasn’t going to go to work doing it in case they asked me to rrrrrrrrrrrrrroll out and go home.  Permanently.

All I can say is, like many of my jokes, they can’t all be winners.  I do want Beavers back as the Master as soon as possible, but only if they can work out that the two enemies do not need to meet in the right order!  Until then, let’s rrrrrrrrrroll onto the next one!  ML