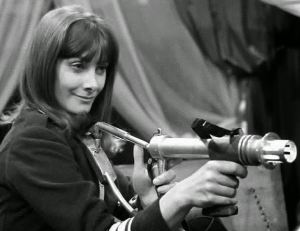 No, not Sarah.  Sara Kingdom, from First Doctor story The Daleks’ Master Plan, and the most debatable companion from the lists of those who are generally considered “official” ones.  She is unique among the Doctor’s companions, a killer who is working for the Doctor’s enemies before she meets him.  During the Classic Series only Turlough comes close, although he is not a killer and doesn’t have a crime to atone for.  More recently there was an attempt to follow a similar character arc with Missy, and it’s a fascinating path for a companion to follow: from darkness to the light.

SARA: Look, what do you want me to say? That I believe your fantastic story?
STEVEN: It’s true.
SARA: It mustn’t be.
DOCTOR: I’m afraid it is, my dear.
STEVEN: But Bret had to be killed.
SARA: Shut up! Bret Vyon was my brother.

Looking at the wider world of fiction and drama, characters who want to atone for past sins are to be found all over the place.  Certain characteristics generally link them together:

The third one of those often takes the form of an assassin or killer of some kind, who has special skills that can be turned on the former employer.  Sara is hand-picked by Chen for the job of recovering the taranium core, knowing how capable and ruthless she is.  She is a useful person to have on his side, and subsequently becomes a useful ally to the Doctor and Steven.

But Atonement is a tricky business.  What makes this kind of character so useful is the open-ended nature of their motivation.  Atonement is a journey, not a destination.  It represents an unreachable goal.  Few atoners can ever find peace, except in one particular way that we will come to.  Ultimately, no amount of fighting against former employers, working for the good guys, or killing off other baddies will reverse the atoner’s former crimes.  For Sara that means Bret Vyon.  However hard she tries to do the right thing, she can’t bring her brother back to life.

A character arc needs a destination point though.  A resolution is called for.  That brings us to the exception to the finding peace rule I mentioned above.  There is only one way out for the atoner, and that’s death.  It’s as close as the atoner can get to balancing the books.  Sara took the life of her brother, and gives her own life, fighting the cause he believed in.

This is of course the John Wiles era of Doctor Who, so it’s all fudged a little.  The one consistent theme throughout the Wiles-produced stories is that the Doctor is a loser.  The death of his companion is therefore sold to us with a skewed emphasis.  Instead of the bittersweet moment of atonement this kind of character arc would usually build up to, the focus is instead on the Doctor’s failure (again).  He’ll keep failing until Wiles departs and the series resets, pretending none of this unpleasantness ever happened.

So Sara almost gets her big moment of self-sacrifice, but in the end it’s little more than another thrown away life, caught in the wake of the Time Destructor when she should have been safe in the TARDIS, her presence achieving very little.  The mistake would later be repeated with Adric, whose death is similarly hollow and pointless.  If you want to see how this should be done, watch the final episode of Buffy.  But it is churlish to expect 1960s Doctor Who to meet those standards.  Whatever you think about the status of Sara as a companion, at least she was a strong attempt to do something different, and that is a testament to the Hartnell era.  Think about the female companions that had featured in Doctor Who so far by this point:

…and contrast this to the 21st Century approach to female companions:

…and that brings us bang up to date.  1960s Doctor Who was blazing a trail for inventiveness with its choice of companions, and Sara Kingdom on her path to atonement is surely the most inventive of them all.   RP

Author of windowsintohistory.wordpress.com Co-writer on junkyard.blog Editor of frontiersmenhistorian.info
View all posts by Roger Pocock →
This entry was posted in Companion Tropes, Doctor Who, Entertainment, Science Fiction, Television and tagged Sara. Bookmark the permalink.

3 Responses to Sara the Atoner