The Temptation of Sarah Jane Smith

Posted on August 29, 2019 by DrAcrossthePond 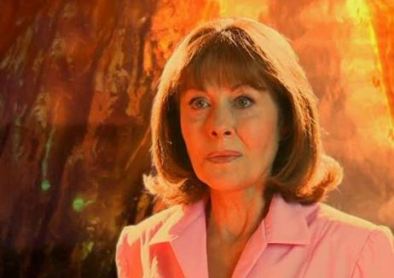 Wow!  Just… wow!  We finally have a story this season that is not about mind control!  Didn’t see that coming!  Well, while that’s true, it wasn’t really why I was saying “wow”.  I have to hand it to Gareth Roberts, he wrote a truly outstanding story this time.  The Trickster is back in all his gloriously creepiness.  Again, he is trying to create an alternate world where chaos runs supreme.  Sadly, he brings the Graske with him, which I always view as a comedy-relief alien.  There’s just the feeling that it’s not a real villain, having been created for a game around Christmas 2005.  But I can’t be unfair: Robert’s writes a story for this Graske that made him a compelling villain.  Actually, villain is the wrong word: character is more accurate.  He’s the typical Graske through part one, but by part two, we realize he’s as much a slave as the humans and we start to root for him as much as we do for Sarah Jane and company.  This also leads to a nice scene between him and Clyde, the latter of whom proves to be a man of his word, to the Graske’s appreciation.  (Clyde’s bravery also earns him a kiss from Rani.  Go Clyde!)

But before all that, I wanted to mention Ghost Machine.  That’s a Torchwood episode about a time fissure and how a little kid slips through one.  I mention it because time fissures are at the heart of this story and Sarah Jane points out that they do happen.  It’s as if she knows about the events that Captain Jack Harkness has been dealing with.  But it’s one of these that start the whole chain of events.  Also worthy of note is that Roberts doesn’t write Sarah Jane like she hadn’t learned anything from traveling with the Doctor.  She not only considers the ramifications of traveling back to 1951 to see her parents; she actively speculates that it might be a trap.  But when the temptation is as strong as this: to go meet her parents who she believes abandoned her all those years ago, how can she ignore it?  The sad realization is that she was part of the story all along.

Clyde sums this story up brilliantly well: “scary and brilliant at the same time.”  As the audience, we know Sarah Jane has to prevail, but it’s at such a cost.  She has to basically allow her mom and dad to die.  She sends them off knowing that they will die and they understand that something bigger than they are is going on.  It’s a deeply moving story.  I’ve said it all season long, but this story makes the point better than I can: this kids show is willing to tackle some really big issues.  Even during the scene where Rani sees Gita, Mina Anwar puts on a fantastic performance as Rani’s not-mom in an alternate universe.  The way she shakes off Rani like a crazy person is heart wrenching.  While Gita is often a comic character herself, this brief encounter with her alternate self is powerful.  But there are light moments too, like when Rani runs into a crowd in 1951 and gets all kinds of looks; “Ethnic person in the 1950’s!”  Sad, but probably exactly what people would notice.  And there’s also the TARDIS.  Yes, Sarah Jane finds the TARDIS and realizes the one man who can help is actually there.  She starts banging on the door, calling for the Doctor.  The doors open… to a police man who is none too keen on being disturbed.  It’s a funny moment, but also makes us realize that this will not be solved with a quick wave of the magic wand, aka Sonic Screwdriver.

The cast give us a tour de force and the story is one of those must-watch episodes.  It even goes so far as to explain, through the use of notes that Sarah Jane’s parents used to leave each other, where the phrase “Mr. Smith, I need you” comes from.  This may have been aimed at a young audience but it can appeal to the adults in equal measure, maybe even more so, as a younger viewer might not pick up on some of the subtle and heartbreaking nuances.  If there were one story from the series run so far that should be seen, it’s this one.  Let’s hope the season finale can be keep the trend going!  ML