The Eye of the Scorpion

Posted on September 3, 2019 by DrAcrossthePond 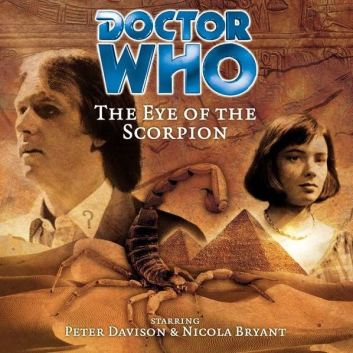 Coming off of Project: Twilight, I knew Big Finish would have their work cut out for them with The Eye of the Scorpion.  They tell good stories, but after such a powerhouse, it was questionable if they could keep the momentum going.  And introducing a “new companion” in  Erimemushinteperem (aka Erimem) was likely to be another one of those pseudo-companions that we would really like but have to say goodbye to by the end of the story because that seems to be the pattern with these audios.  So I went in with an open mind, but automatically a little on guard, because I wasn’t expecting a great story.

Luckily I was very mistaken.  In fact, we get a very strong story set in ancient Egypt.  There is, as is a prerequisite for Doctor Who, an alien menace that is immediately intriguing, coupled with a would-be pharaoh who no one has heard of that makes us aware that this character may not survive the story.  All of this and a series of great characters to boot!  Well… mostly great.  Where it goes wrong:  Yanis.  I think when Harry Myers took the role of Yanis, he must have listened to Reggie in Project: Twilight and decided to play the ancient Egyptian as a cockney crime lord.  In fact, I was certain it was the same actor for a while until I checked.  Yeah, Myers also has a great voice and is a powerhouse as a bad guy but … um… well, I don’t think the ancient Egyptians would sound that much like a modern crime lord.  On the other hand, new character Erimem is fantastic.  Played by Caroline Morris, she is intelligent and immediately likable.  As a  companion, she seems somehow more intelligent than the thoroughly modern Peri.  The relationship they develop is not unlike two sisters and I love the chemistry.  But Peri is written with a mix of brains and stupidity in equal measure.  Yes, she has some hilarious lines (Kojack, anyone?) but she seems to have no idea about time.  I won’t lie, my history isn’t top notch but I do know Margaret Thatcher, Indira Gandhi, and penicillin are all from a time period later than ancient Egypt.  I might not know the exact date of the discovery of penicillin so if this story took place in the 1800’s, sure I could understand Peri’s uncertainty, but 1400BC???  Come on, Peri.  You shouldn’t need a reminder of where (or when) you are after everything you say!  That said, the way she speaks to the guards is brilliant.  So it’s hard to love Peri in this episode, even though I think Nicola Bryant really was finding a better niche for Peri than she had with her TV episodes.

Then there’s the Doctor.  Like that fairly weak Minuet in Hell, the Doctor is missing here too, but unlike that former episode, he’s actually missing; for the entirety of episode 2, in fact.  Yes, the story moves on nicely, following Peri and Erimem, but I’m listening to Doctor Who audios with the expectation of getting The Doctor.  When he is in the story, Davison is perfect, but his absence leads us to a rather odd comment too.  The Doctor, having been poisoned, is supposed to be lying down on a bed trying to recover.  When Antranak (Jonathan Owen) walks in the room with Peri, he sees the Doctor is gone and episode 2 ends with the realization that the Doctor is “dead”.  Now, here again, my logic may deceive me, but if I go into a room where I expect to find a guy dead in bed from poisoning and he’s not there, I think my first thought is, “holy cow, he got better?!”  Not, “oh, yeah: proof!  He’s dead.  He obviously got up and walked away to bury himself.  Very courteous man, he was!”  So I don’t know if that was the best they could do for a cliffhanger, but as far as I was concerned, it painted Antronak as a bit of a bonehead.

Yet, complaints aside, I really thought this was a strong story and loved the way the Doctor lured the villains into a tight spot with the hopes of getting a great weapon only to then deceive them.  That’s some brilliant stuff.  Then we get another of those human triumph moments where all the personalities the alien entity had overpowered turn the tables and beat the bad guy once and for all.  And now we have a new companion to boot!  Her first look inside the TARDIS is wonderful too.   What can I say?  I enjoyed this story immensely.  Since I’m not looking ahead, I have no idea where we are going next, but I just hit two really good stories in a row.  I can but hope that we hit a 3rd!  ML