Enemy of the Bane

Posted on September 5, 2019 by DrAcrossthePond 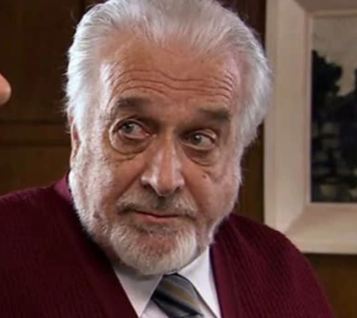 I decided to watch Enemy of the Bane over two nights and walked away from part one laughing.  I could envision the whole scenario…

Logging into IDN – that’s the Intergalacted Defeated Network for those of you not in the know – “Shub’s Mom” posts:

Looking for a warrior of unrivaled character to get sweet revenge on pesky kids and annoying dog.

Mr. Potatohead signs in.  Pesky, as in Thelma, Shaggy, and Scooby?  Or Sarah Jane Smith, K-9 and Company?  In either case, I’m your warrior!

The reply is immediate:  I see you know her too?  Here’s the deal… I’ll throw myself into a “tense” situation and Sarah Jane will trust me.  First I’ll hypnotize the mom of a kid I never met before because that’s a welcome calling card.  I’ll map the rest out when you get here.  Meet me on Bannerman Road – it’s a paved street in England.  Have you heard of it?

Mr. Potatohead replies: Oh, have I!!

What follows is another silly kid show adventure; a far cry from last week’s impressive The Temptation of Sarah Jane Smith.  Why silly?  Well,  it’s the exploding Bane this time, that Nickolodeon goo’ed Clyde and Luke so severely that they are dripping in it one moment… and totally clean the next.  And, frankly, Clyde should be disgusted by having a living creature explode all over him.  Instead he’s willing to joke about it.  And Wormwood really is a very caricature villain coupled with a dishonored Sontaran.  Aren’t Sontaran’s turned into wet nurses when they are dishonored?  Or did they stop that practice after Strax?  What about Gita?  She’s abducted and when she comes ’round, Rani tells her she’s been sleepwalking.  Sure, but the cops were called.  Won’t they turn up and ask some pointed questions?  (In fairness, the questions and responses the police have given all seem to be pretty on point, so kudos to that!)   And are you kidding?  There’s yet another monster buried on Earth?  I knew my list wasn’t comprehensive!

Then, at about 2/3rds of the way through part one, something unexpected happens.  Sarah Jane announces that she has to get into “the Black Archive” (which from the distance, looks like a spaceship, but up close is a regular office building made of red brick).  She can’t do it on her own and needs the help of a friend.  Enter the magnificent Brigadier Alistair Gordon Lethbridge-Stewart.  Suddenly there’s a new element and it makes such a difference!  Yes, he’s older and doesn’t pass out well (he just sort of sits down when knocked out) but who cares?  It’s the Brig!  Now suddenly I’m looking at the episode in new light!

I love the continuity: Rani and Clyde didn’t meet the Bane during the pilot and that wasn’t forgotten by the writers.  (Chibnall, take some pointers, for the love of Rassilon!)  The Brig comments on Daleks, Cybermen and Zygons; I love it!  And there are some great lines, like Wormwood’s “Still involving children in your dangerous game?”  And then there’s this, which I both loved and cringed over: the battle of the costume jewelry; how very female!   Or one scene that made me laugh was watching Clyde put his sandwich down on a random table in Sarah Jane’s house.  That’ll be appreciated later!

But then the episode pulled the rug out from under me completely.  It started as a hint earlier when Clyde was saying how, with all the monsters he had encountered, his dad was the worst of them.  Wow… but it was a blip.  It was said and then it was gone.  Then the real shock came; this “silly story” was a story about parenthood and what it means to be a parent as Wormwood tries to usurp Sarah Jane’s position as mother.  It’s not about who gives you life, but who gives you love.  Sarah Jane is more mother to Luke than Wormwood knows how to be.  She created him but she didn’t love him.  When that realization hit me, all the silly thoughts I had earlier felt like some of Clyde’s comedy; all designed to cut the tension.  The truth was, this was an important story.  Sure, it’s masked with tentacled monsters and potato headed warriors, but at it’s heart, it’s about love and friendship and belonging.  It helped round out a great season with some fun action, silly special effects and a lot of heart.  And for a season finale, what more can one ask for?  ML

Like Loading...
This entry was posted in Doctor Who, Entertainment, Random Chatter, Reviews, Science Fiction, Spinoffs. Bookmark the permalink.

1 Response to Enemy of the Bane