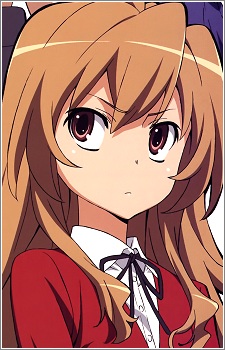 I do love a soppy romance and, although I won’t go within a mile of a live action romcom, I do find their anime cousins really enjoyable. I think that is because they surprise me so much. They always seem to do something more than you would expect from the genre, and have such powerful themes to explore and offer important lessons in life. Toradora! is a great example of this. It is a 25 episode series (plus an OVA), and it takes full advantage of its episode count to develop the story gradually so we really understand the characters, exploring the character traits that define them and, in the case of the two main characters, how their broken family lives are playing a part in how they look at the world.

The main protagonist is Ryuji Takasu, and he will be a broadly familiar character type for those familiar with series such as My Teen Romantic Comedy SNAFU: a slightly grumpy teen with a heart of gold, whose looks are against him but somehow fascinates girls. You can easily spot these kinds of characters in anime because they are not drawn with big anime eyes. Instead he has narrower eyes, which apparently we must take to mean he has a gangsta look, and most of his fellow students are a bit nervous of him and assume he is a tough guy. Ryuji lives with his ditzy single mother and a very odd parrot, and has an obsession with cleaning. A young male who enjoys cleaning? Some people might be scornful at that idea, thinking such a thing doesn’t exist. You’re reading a blog written by one, right now. Having said that, I don’t take things to the level of Ryuji, who spots odd socks in people’s houses and has a compulsion to pair them up. It’s a funny character trait, and something a bit different for an anime.

Living in the building opposite Ryuji, with windows handily facing each other, is the “Palmtop Tiger”, Taiga Ai Saka, a very short girl with a fiery personality, whose classmates fear and admire her. She lives alone (her family issues are eventually fully explored, and it’s all compelling and emotional), and ends up latching onto the very domesticated Ryuji, who basically ends up looking after her by accident, cooking meals for her, etc. It’s not just the food that matters (although she has an impressive appetite!). This is her first taste of normal family life.

Complicating matters is Ami Kawashima, a fashion model who is immediately adored by the whole school when she transfers in… except the aforementioned group of four main characters. Ryuji in particular sees straight through her sweet girl act, and thinks she should just be herself, and he therefore becomes the one guy in school she can’t have. Of course, she falls for him. Taiga provides an important example for Ami, of a girl who has a similarly fiery personality (which Ami hides) and doesn’t hide it, but still manages to be popular… and loved.

So we have a love pentagon setup, but more than anything it’s a parable about taking chances when you have them in life and not letting opportunities slip through your fingers. Although the series concludes just the way we would want it to, there are broken hearts left behind, and those hearts are broken largely due to missed opportunities, and putting the happiness of others ahead of their own. The series fully explores the rights and wrongs and implications of all that. It’s thought-provoking, fascinating, emotional and ultimately very rewarding to watch.  I’ll leave you with the trailer, which makes me want to watch Toradora! all over again.   RP

Co-writer on junkyard.blog. Author of windowsintohistory.wordpress.com. Editor of frontiersmenhistorian.info
View all posts by Roger Pocock →
This entry was posted in Anime, Entertainment, Reviews, Television and tagged Toradora!. Bookmark the permalink.