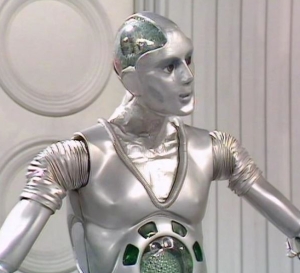 Bizarrely, not a man in a robot costume.

There have been plenty of missed opportunities in the history of Doctor Who, but Kamelion probably stands out as the most wasteful of all.  He had an introductory story and then almost precisely one year later he was written out.  Between those two points he was Doctor Who’s un-robot.

An un-person, which is the trope I am referencing here, is a character who disappears from a series without explanation.  When this happens due to issues behind the scenes, it is also referred to as “Chuck Cunningham Syndrome”, named after a character from Happy Days who disappeared from the show.  So what happened with Kamelion?  Why did he become an un-robot?

The whole idea behind Kamelion was bizarre to start with.  When John Nathan-Turner took over as Doctor Who’s producer, he was keen to write out K9.  It therefore seems a little odd that the decision was ever made to introduce what would have been another robot buddy, albeit one in the shape of a man rather than a dog.  I suspect the idea of a working robot as one of his “actors” appealed, with the resulting publicity something like that would bring, but in reality it just didn’t work.  Even technology in 2019 is probably not sufficiently advanced to bring a character like Kamelion to the screen without an actor in a costume.  It certainly wasn’t in 1983.  To give everyone making this at the time their due, Kamelion was a stunningly ambitious idea for 1983, and to get anything on screen at all using an actual talking robot was a remarkable achievement, but as a way of making Doctor Who it was unsustainable.

Now, anyone with the IQ of a prune can see two possible ways Kamelion could have continued as a character in Doctor Who, so it baffles me that nobody figured this out at the time:

Seriously, did nobody notice Kamelion is a shapeshifting robot?  What a gift that is to writers and casting directors.  Kamelion could have ended up as a character that attracted major actors, like the Doctor himself, but with the added bonus that they only needed to find a few weeks in their schedule and move on.  Imagine the publicity.  This week, Kamelion will be played by…

But instead he gets forgotten.  There was originally going to be a short scene in The Awakening to remind viewers he was still on board the TARDIS, but really, what would have been the point?  Why remind viewers about a character you have no intention of using?

So yes, a bit of a shame, and I do think Kamelion represents a wider missed opportunity in Doctor Who in general: the lack of a shapeshifting character.  Frobisher (a shapeshifting penguin) was great in the DWM comic strips and maybe it’s time to bring this kind of a character to our screens.  The technology is certainly there, and not just for one actor turning into another.  The list of Doctor Who’s 21st Century companions so far goes something like this:

Maybe it’s time for a different approach.  It would be fun to see “shapeshifter” added to that list.  For one exciting moment in 1983, it looked like we were going to get one, and then he turned into an un-robot.   RP

Author of windowsintohistory.wordpress.com Co-writer on junkyard.blog Editor of frontiersmenhistorian.info
View all posts by Roger Pocock →
This entry was posted in Companion Tropes, Doctor Who, Entertainment, Science Fiction, Television and tagged Kamelion. Bookmark the permalink.