The Time of the Daleks

Posted on October 29, 2019 by DrAcrossthePond 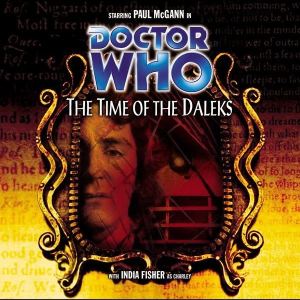 Last week you may recall me writing about Embrace the Darkness, wherein I mentioned starting a 3 hour drive to Maryland.  For the ride back, I listened to The Time of the Daleks.  Oh boy, we start off with Rassilon quoting Shakespeare, because… why not?  There’s no apparent reason for this, but surely they will explain it.  Two stories back, Rassilon and the Doctor were talking (or exposing button holes), so this story should connect with that, even though the intervening story failed to do so!  Or not.  Rassilon is just heard quoting Shakespeare to let the audience know this is a story about Shakespeare.  To compound the insult, we get some odd time distortion where people are forgetting the Bard, because he was taken out of time, but not all people forget him, which obviously means, he’s not taken out of time yet, but the more people who forget him, the more likely it is that he will be removed from time.  Huh??  Someone’s been watching Back to the Future!

Then there’s “boy”.  Everyone goes out of their way to let the audience know no one can remember his name.  So as far as I was concerned he was a dead giveaway as a child version of Shakespeare.  Which of course means he spends the episode hearing people quote what he will eventually write.  Timey wimey!  The supporting cast I cared about as much as I care about snails in the garden.  (That sounds meglomaniacal, but I mean that sincerely.  I didn’t come away liking anyone!)  Yes, McGann and Fisher are fine; I mean, McGann is fantastic, but the story just never clicked with me.  One issue is that this was remade into Victory of the Daleks in some ways with the Daleks being all altruistic, but you know they will never be good guys!   Then their obsession with Shakespeare is so fanciful, I couldn’t buy into it.  Rassilon and Daleks quoting the Bard?  Surely someone was running low on ideas.  To hammer home the final coffin nail, the quote used by Rassilon at the beginning about coming full circle is used now by the Daleks, proving the writer knows what a circle is.  Bravo.  Next week, let’s examine the trapezoid.  (Come on, Justin Richards, you can do better than this!)

The only thing I will give the story is an incredible array of lines designed to help create continuity.  When I talked about Seasons of Fear, I mentioned that I thought I heard a Dalek.  I was right, it seems.  305AD is the time slot wherein I thought I heard out tin plated friends and this story does indicate that there is a time portal leading back to that era.  Karsharat is mentioned from The Genocide Machine with McCoy and Aldred explaining why they were invading that planet.  Orson Welles, knowing nothing of Shakespeare in Invaders from Mars, now makes sense.  And the use of mirrors for time travel is a nice tie-in with The Evil of the Daleks.  So the easter eggs are fun to spot.  I am not sure if I missed some, but I did hear the word “Eurozone” and think that was an Enemy of the World reference, but I feel like it would be cheating to look it up!

No, I’ve heard some weak stories, but this one tops the charts for me.  It’s a shame because McGann is one of the best Doctors to listen to, but so far his stories have been the most diverse in terms of quality.  This season has hit an all-time high for me, and an all-time low.  I guess I’d call this one The Time of the Lows.  (Even my joke is better than this story, and that’s saying something!)    ML

Like Loading...
This entry was posted in Audio, Doctor Who, Eighth Doctor, Reviews, Science Fiction and tagged The Time of the Daleks. Bookmark the permalink.

3 Responses to The Time of the Daleks