Posted on October 31, 2019 by DrAcrossthePond

BREAKING NEWS!  HALLOWEEN SPECIAL!  READ ALL ABOUT IT!!!

HAPPY HALLOWEEN, friends of the Junkyard.  I’m taking a temporary break from The Sarah Jane Adventures to bring a Halloween treat.

Something moving in the mist

As October trundled onward, things were looking iffy for a new subject for my Halloween post.  I was starting to cast my eyes over some old favorites that have never made it to the Junkyard but what I wanted was something new … and Steam did not let me down.  Steam, as many of you know,  is my gaming platform of choice.  On October 22nd, I saw what I had my eye on: Rock Pocket Games Moons of Madness had been released.  I wasted no time in buying it.  Described as a “first-person, story driven cosmic horror game”, it promised my favorite form of terror: Lovecraftian Psychological dread.  This is the existential dread that shows up on everything Lovecraftian; that cosmic level threat that is so vast, we are but microbes to it.  Stories that they can’t make into movies because movies have to appeal to an audience that ultimately want to see the “good guys come out on top”.  Even the nearest Lovecraftian horror to find any form of commercial success these days comes from Sandra Bullock overcoming a cosmic horror in Birdbox and even that has a semi-happy ending.  So how does a game fare when giving the player a chance to partake in such a vast world?

Well, I was expecting a first person perspective, but with that, I expected weapons, even if this weren’t a shooter.  The only “weapon” that we ever get is a crowbar and that is used very sparingly.  The story opens with the lead character, Shane Newehart, living on Mars performing tasks but things are going pear shaped from the start.  A tentacle slithers out of view like a particularly shy snake and flashes of what looks like a person are seen in the distance.  The tension mounts quickly.  As the player, I suspected it was a dream because the action began a little too quicky.   It has the unnerving quality that ropes me in but I felt I had no chance to get aquainted with the surroundings.  This is rectified when the dream is revealed and now the character starts going about his actual activities… which then felt stagnant.  Luckily all this begins to change within the first 30 minutes of the game.

The story is driven forward by your communication with a colleague, Declan, on the other end of the comms unit.  He and the base commander Wilcox are always a step ahead and can’t wait for you to catch up because Martian storms are causing problems and a botany experiement has gone horribly wrong.   Periodically, you find yourself in a dream state as The Dreamer awakens.  (Now I’m in familiar territory!)  This opens the door for you to explore the main characters past through flashback sequences in his own basement or his therapists office.  It also gives the player a chance to find out about the characters family and claiming “Mother issues” barely covers it!  (I mean, the initals of this game is: MOM, so should I have expected any less?!) 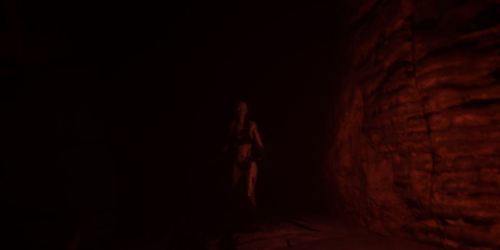 There are a lot of great elements to the game.  For Lovecraft fans, the existential horror is never seen but there is the plant virus that goes berserk.  It’s reminiscent of Dr. Lasky from Doctor Who’s Terror of the Vervoids as the doctor in charge of the botany experiment becomes one with her plant studies.  This plant problem allows for some grotesque images of black sludge and tendril-tentacles to move about the base.  But some of the wording is very crude, and I’m not talking the R-rated vulgarity.  I can live with that as the events would make even the most pious sound like they were auditioning for a Quentin Tarantino movie.  I’m also not a fan of the half-naked female crone that looks like she’s been taking modeling advice from Sports Illustrated.  One expects a creepy crone to look… well… creepy and croney.  To couple this semi-sexy, naked monster woman with Shane’s mother adds a level of horror that I wasn’t expecting, but such is the nature of most of Lovecraft’s horror anyway, so it’s true to the source material.

Speaking of source material, Shane’s background, as we learn through computer files, is as a mechanical engineer.  Ironic for me personally, since my son is looking at colleges with a mechanical engineering background.  I should recommend he look up Miskatonic University, since that’s where Shane went!  There’s also images of the Great Old Ones and even the Necronomicon makes an appearance.  Klatu, Barada, Necktie!

The graphics are superb; the place feels lived in.  Within the first minute of the game, I realized there were fingerprints and marks on the window of Shane’s room in the lab.  There’s also a really nice touch with chapter titles appearing on screen in cinematic format.  One such title even blows away in the breeze.  They also feel like Lovecraft stories, with all their madness-enducing terror, like Beings from Dust.

The game ends up being a mix of walking simulator, puzzle game, psychological horror story.  One of my biggest gripes was the inability to jump.  The worst of the game though is the lack of any awe-inspiring monster to end the game.  I was hoping for an after credit scene that would give us a hint that Great Cthulhu was coming, but alas, that doesn’t happen.  I won’t spoil the end  but it’s certainly an enjoyable game that never loses sight of the source material.  I picked up up for $20 but it retails for $25, and it’s worth it for the story alone.  I got about 7.5 hours out of it, but looking online for a particularly tricky puzzle, I saw that some people have completed it in under 4 hours.   Bang-for-buck, I can’t complain balancing cost against play time.  I always balance play time to cost and I think this strikes a neat balance.  And the handful of jump scares are balanced with a nice amount of actual psychological terror so it’s not just dark rooms punctuated with startling noises.

Statues that decrease the resale value on your crypt

There are scarier games, but few that respect the lore of Lovecraft’s mythos and present it in such a way that feels like they care.  I feel certain the writers, programmers and developers cared about what they were working on and it shows.  In fact, the main website is a game unto itself, which I’ve made some progress with and I can tell you, even that is worth a visit (external link).  Alas, I must go now, since they didn’t give me any proof of Cthulhu’s coming, I have to perform more rituals to summon him.  It’s so time consuming… Say it with me now: Ia, Ia, Cthulhu Fhtagn!  And check out the trailer for more nightmarish fun.  HAPPY HALLOWEEN.   Madness Lurking

This entry was posted in Entertainment, Games, Reviews, Science Fiction and tagged Halloween, Horror, Moons of Madness. Bookmark the permalink.

1 Response to Moons of Madness