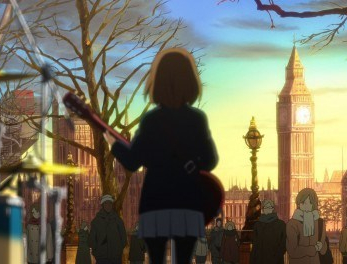 Before we started looking at some creepy anime for October I wrote about the anime series K-on! Now that Halloween is over for another year let’s return to the gentler subject of K-on!, specifically the movie that followed the end of the television series.

To recap, at the end of the second season four of the girls (Yui, Mio, Ritsu and Mugi) had graduated from high school and won their place in the same college, while Azusa was of course going to have to be left behind for her final year in high school, being a year younger than the others. After the very emotional graduation, the series limped to a slightly odd conclusion with some bonus episodes set pre-graduation. The movie takes the same approach as the bonus episodes, set pre-graduation.

The bonus episodes at the end of the second season featured the girls talking about taking a trip abroad together. The first third of the movie covers a lot of the same ground, with the second third (and the movie’s selling point) set in London. The final third of the movie is their return to Japan and graduation, performing a farewell song for Azusa, which again re-treads some of the same ground as the television series. The whole thing therefore ends up as a bit of an odd mixture. Although perfectly coherent, it feels more like four or five television episodes stitched together than a movie as such.

The pre- and post- London stuff is all good fun, if a little familiar, and the song for Azusa will raise a tear from even the hardest-hearted of viewers, but the main point of the film is to show the five girls having fun in London. Predictably a few things go wrong for them (ending up at the wrong hotel, etc), but nothing too calamitous. This is K-on! after all. In fact, most mishaps lead to opportunities, such as getting mistaken for a band that has been booked to perform at a Japanese restaurant. Amusingly, the sight of a sushi bar in London is completely unfamiliar to the girls, clearly an Anglicised version of Japanese cuisine and culture rather than anything a Japanese tourist would actually recognise as their own.

For both television series of K-on! I have watched the dub version, and have really enjoyed the performances of the talented voice actors, including a couple of my favourites when it comes to anime dubs: Stephanie Sheh (Yui) and Christina Vee (Mio). So the dub version was my choice for the movie as well. This came with some annoyances. Although the main cast are fabulous as always, full of fun and energy, nobody thought or cared to employ British actors to play the London characters. There are plenty of British actors working in America, so why do we have to have a bunch of American actors doing their best Dick Van Dyke impressions? I don’t think this is an acceptable thing to do any more, and it really does make those scenes a torture to watch for a British viewer. We always use Dick Van Dyke as an example of course, although he’s actually rather good and the comparison is an insult to the great man. What we actually get is every London character, whatever their background, from the sushi restaurant owner to the taxi driver to the receptionist at a posh hotel, talking in hideous Londoner mockney cockney. In one particularly frustrating example, the actress veers back and forth, seemingly undecided between trying to emulate Dick Van Dyke or the Queen.

But the dub has an even bigger problem than this, and it’s one that seems to be insurmountable. When you’re dubbing a Japanese animation into English, how on Earth do you handle scenes where the Japanese characters are clumsily trying out their English? How do you handle scenes where the Japanese and English characters are trying to communicate and struggling to understand each other? You can’t suddenly have the Japanese characters talking with a Japanese accent, or something weird like that, after over 40 episodes of them speaking perfect American English in the dub. The answer to these questions is unfortunately very awkwardly and confusingly, and I don’t see how it could have been handled better. So we get scenes where we have two people speaking to each other in perfect English, and being unable to understand each other. And then we have occasional moments with a Japanese character choosing the wrong English word to use, despite this making zero sense in a dub.

It’s impossible, though, for a series like K-on! to leave us feeling annoyed for too long, because the characters are just so loveable as usual. You can’t help but be drawn in by their gentle little adventures and absorbed by their sense of fun and the importance they place on friendship. The movie remains true to the slice-of-life approach, with no major dramas or relationship stuff. There is an attempt at some yuri moments with Azusa misunderstanding Yui’s affection for her, but it is little more than a funny bit of padding. The only kind of relationship K-on! has ever been interested in exploring is loyal, unwavering friendship, and that’s lovely.

It remains a slight disappointment that the only K-on! movie we ever got merely retreads old ground and throws in a trip abroad. It would have been so much better to move the story on, as per the manga series, which follows the girls into college, while Azusa, Ui and Jun form a new group, with two new members. What we got instead was celebratory, but stuck in a bit of a rut. With a spinoff manga starting last year, maybe we’ll be lucky and it won’t be too long before we return to the happy world of K-on! It has been a gentle triumph.   RP

Author of windowsintohistory.wordpress.com Co-writer on junkyard.blog Editor of frontiersmenhistorian.info
View all posts by Roger Pocock →
This entry was posted in Anime, Entertainment, Movies, Reviews and tagged K-on!. Bookmark the permalink.