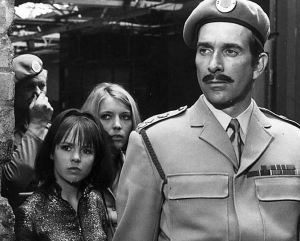 A UNIT soldier holds his nose after a rare moment of public flatulence from the Brigadier.

I’m not a huge fan of The Simpsons, but I could probably have a good stab at naming most of the characters and listing their defining traits. When it comes to Homer’s neighbour Ned Flanders, I would probably mention his obsession with his faith, and that’s about all I could say about him. This is because he is somebody who started off with a more rounded character, but was gradually distilled down to just one character trait. This process is therefore known as Flanderization, when a character trait becomes the character.

The most common place to find this happening is in comedy, where realistic characterisation always has to play second fiddle to making the viewers laugh. To take my favourite comedy, Friends, all six main characters get Flanderized over time. As a general rule this works well, but the exception is probably Ross, whose obsessions, neuroses and extreme reactions to the constant disasters in his life reach the point where eventually he almost comes across as mentally ill.

The process is not confined to comedy, however, and there are actually plenty of examples in Doctor Who. This applies to Doctors, companions and monsters, so the Fourth Doctor becomes increasingly silly, Tegan becomes a big mouth on legs, and the Cybermen go from having an aversion to gold (but being able to walk around a whole planet made of it) to being killed by a coin being flicked in their direction. In particular, returning characters tend to be distilled down to one defining quality. Sarah Jane’s journalism is quickly forgotten during her original time with the Doctor (while she ages backwards), but when she returns in both K9 and Company and School Reunion it’s her raison d’être. The First Doctor’s irascibility fades away very quickly during his original run and he is more typically a giggling thrill-seeker (especially when he’s with Vicki), but every time he comes back in a multi-Doctor special he’s a grump, and his appearance in Twice Upon a Time is far more reflective of what people think the 1960s was like than actual 1960s Doctor Who, complete with casual sexism. But one of the most Flanderized characters in Doctor Who, and also one of the few where the process was reversed, is the Brigadier.

We have to be careful here not to fall into the trap of looking at what people think happened rather than what actually happened, a common problem with Doctor Who (e.g. “reverse the polarity of the neutron flow”, which the Third Doctor almost never actually said).  It would be all too easy to overstate this, but it is fair to say that the character of the Brigadier was simplified and distilled down to some relatively negative traits over time, to a significant extent. He started off as a competent military man, and was clearly capable enough and open-minded enough to be placed in charge of UNIT. Spearhead from Space illustrates that well:

BRIGADIER: We deal with the odd, the unexplained, anything on Earth, or even beyond.
LIZ: Alien invaders? Little blue men with three heads?

Liz is the newcomer, and sceptic, whereas the Brigadier is the man who believes in little green… er, little blue men, apparently. But by the time of The Three Doctors he has turned into the sceptic:

BENTON: It’s not just a matter of the same country, sir. If the Doctor’s right, we’re not even in the same universe.
BRIGADIER: What? Oh, nonsense, Benton. I tell you that’s a beach out there. It’s probably Norfolk or somewhere like that.
DOCTOR: Oh, please, if you’d only listen to me.
BRIGADIER: Right, now I’ll tell you what we’ll do. You two stay here. See that nobody wanders in. We can’t have the place overrun with holiday makers. I’ll nip out, find a phone and tell the authorities exactly where we are. I’m fairly sure that’s Cromer. Back in a jiff.

This turns him into a fool, refusing to believe the evidence of his eyes and disregarding his knowledge about the Doctor’s travels. Similarly, he becomes a man who is generally incapable of dealing with any problem without the Doctor’s help. I know that’s the nature of the series, but it gets emphasised to the point where he’s pretty useless, whereas in his early appearances he is much more capable of acting on his own initiative, whether that be wiping out the Silurians or rescuing the Doctor:

“Thank you, Brigadier. But do you think that for once in your life you could manage to arrive before the nick of time?”

In the end, the lure of the clichéd military buffoon character is just something the writers cannot ignore. It’s the easy and obvious thing to do with the Brigadier, and it’s lazy writing. But I mentioned that the Flanderization process gets reversed, and this happens when the Brigadier makes his return appearances. This is unusual, because it is the opposite to what normally happens. Return appearances tend to be a mess of half-remembered characteristics (as per the First Doctor), but something very different happens with the Brigadier. There are two reasons for that. Firstly, there is no point bringing back the Brigadier in his Season 10 military buffoon persona. If you want a military buffoon in your script then it’s more useful to write a new one who can better perform their usual plot function of being a thorn in the side of the hero (just about every Admiral in Star Trek is one of these). Secondly, nostalgia comes into play. When the Brigadier comes back, particularly in Battlefield, it is a triumphant return, and he is seen to a certain extent through rose-tinted spectacles and redefined as a stalwart hero, a far cry from the man who travelled into the universe of antimatter and insisted he was in Cromer. It’s just a shame he ended up as a reanimated corpse, but life (and death) doesn’t always go according to plan in the world of Doctor Who. Let’s just hope he found his Cromer in the end.   RP

Author of windowsintohistory.wordpress.com Co-writer on junkyard.blog Editor of frontiersmenhistorian.info
View all posts by Roger Pocock →
This entry was posted in Companion Tropes, Doctor Who, Entertainment, Science Fiction, Television and tagged Brigadier. Bookmark the permalink.

4 Responses to The Flanderized Brigadier