The Fanservice Debate: Another OVA

Can fanservice ever be justified in anime or is it a disturbing and unnecessary aspect of the genre? In this occasional series we look at the rights and wrongs of fanservice and other questionable content in anime. A warning: this series will have plenty of spoilers and sometimes NSFW discussions and images. This week, the OVA episode of the fabulously creepy supernatural thriller, Another. 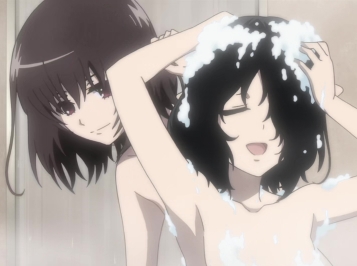 Adding context to the main series, this episode explores the relationship between Mei and her twin sister Misaki, who have been separated at birth and raised as cousins, before Mei sees the colour of death surrounding her sister and tragedy strikes. While Mei’s mother is away at a doll convention, Misaki comes over to stay. The two of them have a bath together and hi-jinks ensue.

In an otherwise mature and thoughtful series this is a surprising thing for the animators to do. Misaki sees her twin naked and says “so that’s how it looks to other people” and they then proceed to have a teasing debate about their weight, before Misaki grabs Mei’s chest and comments on how she has grown. “When did you become such a pervert Misaki?”, asks Mei. The animators employ some well-worn fanservice tricks – selective choice of shots to tease the viewers without stepping over the line, and bubbles that defy gravity (but only in one key area). Would sisters ever behave like this, or is it simply there to “service” the fans?

The end of this episode is hugely tragic and emotional, so boy does this need some light and shade. The fanservice is the light, and is very funny. More importantly, it explores the relationship between these two girls. They have been raised as close cousins, and have only known they were really sisters separated at birth for a short time. The bathroom scene really makes the point strongly that they have overcome their past and are completely comfortable in each other’s company as twin sisters, just as much as if they had spent their whole childhood together. When the fanservice is there to throw light on characterisation, it’s much more justifiable.

We will be taking an episode-by-episode look at Another in the New Year.  RP

Read next in the Junkyard… The Fanservice Debate: Toradora! Ep 7
Or read more about this series… Another

Author of windowsintohistory.wordpress.com Co-writer on junkyard.blog Editor of frontiersmenhistorian.info
View all posts by Roger Pocock →
This entry was posted in Anime, Television and tagged Another, Fanservice. Bookmark the permalink.