Posted on November 28, 2019 by DrAcrossthePond

We interrupt our regularly scheduled review of The Sarah Jane Adventures, for a Thanksgiving Day special convention report…

On Saturday, November 23rd, in celebration of the 56th year of Doctor Who, I took a 100 miles drive to Holtsville, NY where Ken Deep was hosting another Doctor Who convention.  Last year, I made the journey and reported on the events here.  Expecting much the same, I was surprised that I nearly missed the venue when I found a far smaller building.  I wasn’t even sure I was in the right place, except Missy and a Cyberman were walking into the building way ahead of me.  I walked in to get tickets and was stunned by a lobby in utter disarray.  It was evident that the hotel was undergoing some construction and the entire opening area was … well, let’s just say that unpainted sheet rock walls fail to catch the eye like a nice hotel lobby does.  The area was smaller than last years convention.  It was congested and it looked … disappointing.  Having arrived at the starting time of 10am, I walked to the vendors room only to be further let down because it would not be ready until 11, and none of the panel rooms were of interest until later.  That meant a lot of standing around in an entry way that was not alluring.  But amazingly, a friend I made the previous year had arrived right behind me.  I walked over and began chatting and in no time at all 11 rolled around.  And so did the guests.  Remember, I said it looked disappointing? 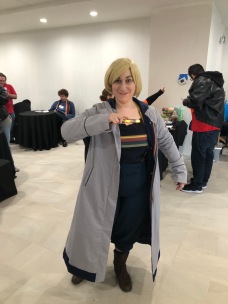 By 12, I was standing in line for a photo session when something hit me.  I was looking at the banner for this years con: An Unearthly Convention and I realized I had made a fatal mistake judging by the appearance of the lobby.  See, last year was like watching an episode of New Who.  This year, in a new venue that will likely be our venue going forward, was like going back to Classic Who.  The stories of classic Who were every bit as good as, if not in some cases better than, New Who, but without the gussied up special effects.  And when that hit me, my opinion of the lobby melted away.  I saw beyond the lobby and realized, Ken did it again!  He put together exactly what he had last year: a convention for those who love the same show I do; a place where fans could get together and make new friends, connect with old ones, and engage in dialogue with the stars of our show.

“You will buy me merchadise!”

So before I talk about the stars, I’ll mention that the dealers room was surprisingly small this year.  I think there were 11 tables and at least one was exclusive content from Crystal Carvings, LLC.  (They are stunningly beautiful creations, but I’m a collector and I know that if I buy one, I’ll want them all and 13 Doctors at almost $100 each… I couldn’t do it!)  One dealer had some truly stunning art work that his wife paints, while another had some really outstanding T-shirts, and one had a great selection of glassware; to comment on just a few.  The point was, the selection was unique.  Anyone can go on Amazon to find their typical merchandise, but this was a selection of those unfindable items.  (Though one table was out of place, and I think it was a bit like last years Theremin table; this time focusing on Tesla coils.  Maybe the merchant was working for the Resolution Daleks.  If it was the same guy as last year, at least he found a less mind-destroying product to showcase!)

Also, there was a tremendous array of cosplayers.  Some were outstanding, while some… defied explanation.  There was Missy wearing a clown mask, a giant fox creature in a  TARDIS costume weilding a sonic screwdriver, and even a Dr. Horrible (at least, I think that was who it was!)  Last years friend, Magenta (above), came back as Jodie Whittaker’s Doctor, looking fantastic in costume. She later met up with a 10th Doctor and a River Song, but by then we were on our own paths.

There was an utterly outstanding Leela intent on meeting Louise Jamison. 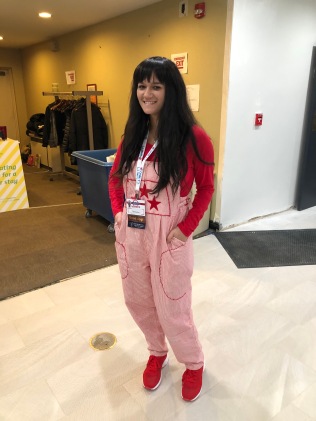 And when I saw a Sarah Jane walk into the con in Andy Pandy costume, I wanted to hug her.  She looked fabulous and I will forever have a soft spot for Sarah Jane.  They both looked truly phenomenal.  Sadly, I missed the opportunity to get pictures of Jo Grant, Idris, and one of the Happiness Patrol!  Plenty of UNIT soldiers wandered the halls too, including a pretty great looking Brigadier.

A handful of Masters roamed the halls, but only one really managed to nail it.  Along with his wife, Ms. Hartigan from The Next Doctor, I was concerned that she may have brainwashed me.  (Let’s face it, between the two of them, I am bound to find myself neck deep in some plot to overthow the world!)  And having just seen a video of Lenny Henry playing the Doctor two days earlier, I was dumbfounded to see someone dressed as Doctor Lenny!

The perfect place for running up and down corridors!

Then there was the parade of Doctors: a number of Sylvester McCoys wandered the building, determined to meet the real McCoy; most of them looked great.  There was one Davison that looked pretty fantastic, one reasonable McGann and a slightly odd Pertwee.  Amazingly, there were several excellent Tom Bakers and one or two good Colin Bakers around.  There was even a little girl, who couldn’t have been more than 5, dressed as Ace complete with jacket and baseball bat.  When she met a Cyberman with his remote controlled Cybermat, she was ecstatic, and the Cyberman looked incredible!  There was even an unintentional Ian, with whom I had a truly enjoyable conversation and only failed in not getting his email address.  Once again, the friends we make at these cons make up a huge part of enjoying the show.  (I hope to meet back with Ian, whose real name is John, next year to pick up our conversation about old time radio shows!  I’ve already listened to two he recommended and they were fantastic!)

Then we come to the guests.  I never expected to have a personal discussion with John Leeson, the voice of K-9, about his time with Lis Sladen or his enjoyment for coming out to conventions.  Louise Jamison discussing her time living in the States or how she feels about the warm welcome she gets at conventions was also an unexpected joy.  Having a semi-political discussion with the wonderful Paul McGann and Daphne Ashbrook was a little surreal; here I am talking to these amazing people once again, like old friends commisserating about the state of affairs.  Reminscing with Sylvester McCoy over his premiere episode during my youth and being able to thank him for being a wonderful hero … what more could one hope for? I had the opportunity to take a photo with the ’96 movie cast and that was a treat!  These guys really make you feel like you are the special guest!   Oh, and last year, I had a conversation with Fraser Hines about miniature paiting, and I was able to share pics of the painted version of Jamie with him?  Yes, surreal indeed.   And then there’s the stand-out star that I don’t think I can say enough nice things about: Katy Manning.

Katy Manning was speaking to a family when I walked over and her warmth and enthusiasm was immediately addictive.  Free hugs for everyone, she could engage in any discussion with absolute glee.  She even recorded a video message for someone who was unable to be there. which was so kind and thoughtful!  We spoke for a while about American television, her time on Doctor Who, and her last stint with Lis Sladen.  It’s funny because I’ve heard people tell me that Katy was “nuts”, but if she’s nuts, it’s what the world needs now.  (Sing it, Burt!)  I’m not kidding!  We need someone who is warm and loving and charming and fun and gracious and sure, maybe a little crazy, but I would not call her crazy at all.  I’d call her amazing, genuine, loving, kind.  Katy’s very nature has me re-thinking everything I’ve ever said about Jo Grant in any of my reviews.  I know one is a character and one is a person, but wow, I can’t have a bad thought about Jo, having met Katy.  And I’ll say this: if she comes back to a con in Long Island, I’m coming back too!  What an utterly delightful human being; worth the drive and the price of admission alone! 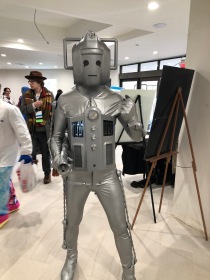 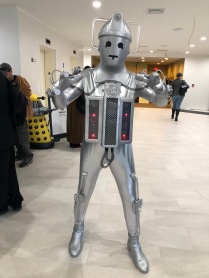 Doctor Who never ceases to amaze me.  It’s warm and welcoming, inviting people of all walks of life to travel with the Doctor.  It reminds us that it’s ok to be different.  And it has told us from the very start of the series not to judge by appearances, which I almost forgot about when walking into this venue.  The guests certainly have not forgotten what it’s all about and Ken Deep has pulled off another fantastic convention.  Like the series itself, it’s the story that kept it going for 56 years, and that’s what gives me hope that Ken will keep doing these for years to come.  I can’t wait to see whose coming next year.  But for now, I thank Ken and his staff for giving us such a fantastic experience.  Again!  And a Happy Thanksgiving to all of you at home too!   ML

This entry was posted in Convention Reports, Doctor Who, Entertainment, Science Fiction. Bookmark the permalink.

3 Responses to An Unearthly Convention