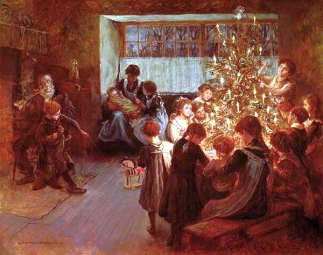 Looking back through some old Bioscope magazines, covering the early days of cinema, there are plenty of references to films that were made to pull in the punters at Christmas.  The following quote is from the 5th November 1914 issue:

In anticipation of the Christmas season, Messrs. the Eclair Film Company, has prepared a film novelty that will be a surprise and a delight, not only to children, who should simply revel in it, but to children of a larger growth. It is entitled “Willy and the Nurse,” the nurse being a fairy godmother, who translates Willy into fairy realms, and contains many delightful experiences.

Now, when I read things like this, what I want to do next is take a look at the film, but of course the usual internet channels turn up nothing.  Not only that, but I can find no mention of the film anywhere on the internet at all.  One wonders what became of it, but presumably it no longer exists.  A Christmas film mentioned in the 23rd November 1911 issue of Bioscope at least has a BFI entry, but that’s all.  Here’s what Bioscope had to say about “The Little Princess’s Christmas Gift”:

A most beautiful and pathetic Christmas legend, reverently portrayed amid gorgeous setting. King Othberg on his dying bed confides the care of his two little children—Prince and Princess Othberg—to his brother, Count Otto. The baby prince is to be presented to his people on Christmas night, and proclaimed successor to the throne. Gaunt Otto plans to poison the Prince, proceeds to the castle, and administers the poison to the sleeping Prince. The little Prince is found dead in the morning, and the royal mother and regal retainers are plunged into grief. Outside the grim walls, amidst the falling snow, the people are gathered, and the heralds wait to proclaim the Prince. They learn the awful news and disperse in sad silence. The next scene is in the Royal Catacombs, wherein the Prince is buried. Count Otto visits it, and gazes with mad horror. The scene again, changes, we see the infant Princess, a child of four, beside her bed praying – “Dear God, will you give me back my little brother as a Christmas gift?” She arises, and suddenly there appears a vision of an answering angel, who takes the Princess by the hand and leads her to the tomb.  Whilst looking at the Sepulchre, the figure of the Redeemer appears, the stone slab rises, and discloses the infant Prince alive.  The angel takes the child in her arms, and returns with the Princess to the great hall, where Count Otto is to be heralded successor to the throne.  To the Count’s amazement and chagrin, the infant Prince is produced, and is proclaimed King, amidst the rejoicing of the people.

Well, they clearly weren’t bothered about spoilers in those days.  And they don’t matter any more, because this film presumably no longer exists, along with so much of our cinema and television history.  One wonders how much of our current creative output will survive the next one hundred years, or even further into the future than that.  Today is 1st December, and for many that feels like the beginning of the festive season.  I’ll be raising a glass to the creative minds of Christmasses long past, whose work has blown away with the icy winds of a hundred Christmasses.   RP

You can find many more posts about Christmas past on my history blog: Windows into History: Christmas Articles.

Co-writer on junkyard.blog. Author of windowsintohistory.wordpress.com. Editor of frontiersmenhistorian.info
View all posts by Roger Pocock →
This entry was posted in Christmas, History, Random Chatter and tagged Bioscope, Cinema, Early days of film, Films. Bookmark the permalink.