Can fanservice ever be justified in anime or is it a disturbing and unnecessary aspect of the genre? In this occasional series we look at the rights and wrongs of fanservice and other questionable content in anime. A warning: this series will have plenty of spoilers and sometimes NSFW discussions and images. This week, the seventh episode of Toradora!, “Pool’s Open”. 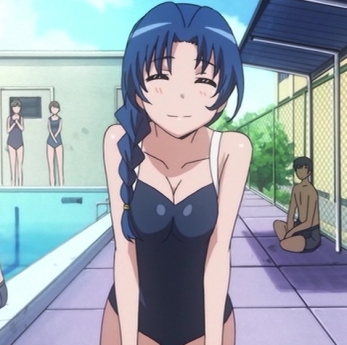 Taiga and Ryuji are neighbours who spend a lot of time together. Taiga lives alone and Ryuji ends up looking after her a lot, cooking all her meals. Taiga has a crush on another boy called Yusaku and Ryuji has a crush on another girl called Minori (keep up!), so Taiga and Ryuji decide to join forces to help each other get the girl/boy of their dreams, but as the series progresses they start getting closer to each other instead, despite their clash of personalities. Also confusing matters is a female model named Ami who is loved and desired by every boy at school except Ryuji, who sees through her perfect girl act to the real Ami. Ryuji is the one boy she can’t have, and becomes the one boy she wants. Confused? It’s just a simple love pentagon. In this episode the school pool is opened for the summer for the first time, and Taiga has a wardrobe malfunction.

I am going to struggle to find any reason to condemn this because it is actually a brilliant episode, but Ami in particular is used for fanservice a little more than perhaps was necessary. Her plot function is simply to make Taiga feel bad about her body and then be mean to her at the pool, so I’m not sure we needed quite so many shots panning up her body when she’s wearing a swimsuit. Also, Ryuki’s shocked realisation about Taiga (“you’re flat chested?”) is a bit odd, as if her body being concealed beneath a slightly different kind of fabric makes her change shape altogether in his eyes.

The fanservice is restricted to Ami, with Minori in particular wearing a modest costume, so the animators resisted the temptation to make a big thing of all the girls in skimpy outfits like many an anime would have done. Also, the setting and outfits are absolutely essential to the storyline, and provide one of the most important moments in Taiga and Ryuji’s relationship. Taiga is being bullied about her body shape and her willingness to confide in Ryuji and seek his help is a clear sign of their developing relationship. She only lets her guard down for him. Ryuji sitting up late into the night to make some fake padding for Taiga shows his kindness. He also gets to play the hero when Taiga gets thrown in by mean girl Ami and can’t swim. Inevitably one of the pads comes out and Ryuji has to pop it back in for Taiga, which is a very funny moment, and again makes a hero of him because he protects her secret. None of this is entirely groundbreaking stuff for a pool episode, but the way it is used to strengthen the connection between Taiga and Ryuji fully justifies the subject matter, and there is a very strong message about the person on the inside mattering, not the shape of their body. As always, the characterisation in Toradora! is outstanding.   RP

Read next in the Junkyard… The Fanservice Debate: Eromanga Sensei Ep 2
Or read more about this series… Toradora!

Author of windowsintohistory.wordpress.com Co-writer on junkyard.blog Editor of frontiersmenhistorian.info
View all posts by Roger Pocock →
This entry was posted in Anime, Television and tagged Fanservice, Pool's Open, Toradora!. Bookmark the permalink.