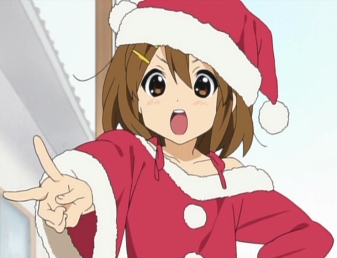 The Junkyard presents a bonus article about the 7th episode of slice-of-life anime series K-on!… Christmas!

I like Christmas. I like anime. And despite less than one percent of the population of Japan being Christians, it’s not actually difficult at all to find those two things combined. The lure of presents, trees, fake snow and good food is strong, and Christmas has become a big thing in Japan. Let’s take a look at an example of an anime that has a Christmas themed episode: the very slice-of-life series K-on!, which follows the day to day life of a group of girls who belong to a band club in school.

We start with the sound of bells, of course, and some almost-but-not-quite Jingle Bells music playing, with Yui and her sister Ui decorating their tree when they were little, in a flashback sequence. Ui wishes for a White Christmas, and the next day Yui fulfils her wish by emptying out cushion stuffing on their front garden. Yes, this is a series that goes big with the cuteness.

More importantly, it always has something to say about the importance of kindness. When Yui and Ui walk to school Yui only has one glove because she has lost one, and Ui doesn’t have a scarf, so Yui wraps her scarf around her sister’s neck, and Ui warms Yui’s hands. A bit schmaltzy, yes, but only the hardest hearts can fail to love these characters.

At the club Ritsu announces her idea for a Christmas party, and it turns out the only suitable place to hold it is going to be Yui’s house. This is very much Yui’s episode, and you can see why she is so often the focus of K-on! episodes. She has that cute ditzy thing going which is hugely endearing to watch, and it’s fun that her little sister behaves like an older sister, basically looking after her. Of course, she ends up making all the food while trying to keep Yui out of trouble, and stop her from eating the party food before the guests arrive.

At the party their teacher, Miss Yamanaka, turns up uninvited, and as always she provides K-on!‘s one and only sharp edge. She is always a bit perverted in her dealings with the girls and she has brought along a Santa girl outfit. This being K-on! it is not at all revealing, with the comedy stemming from the girls’ reactions rather than relying on lazy fanservice. K-on! never does that. The running joke with the teacher is one that you see in a lot of anime series: she is single and on the shelf, and is very touchy about her lack of a boyfriend, so of course Yui puts her foot in it:

“We didn’t ask you because we assumed you had plans with your boyfriend.”

For a moment we get to hear the thoughts of each girl about the party, an interesting insight into their characters, especially Tsumugi who barely seems to have noticed how the teacher has derailed the whole party and just thinks it’s the most exciting Christmas she has ever had. Being as she is the privileged rich girl, who earlier in the episode turns down a holiday in favour of a board game for them to play with, that says a lot about how much these girls’ friendships mean to them.

As always, K-on! has so much to teach us about the importance of friendship and family. Yui and Ui’s presents are perfect: a pair of gloves and a scarf, which the two girls wear to bed. Altogether now… awwwwwwwwww.

Happy Christmas to all our readers, and may your hands and hearts be warm.   RP

Author of windowsintohistory.wordpress.com Co-writer on junkyard.blog Editor of frontiersmenhistorian.info
View all posts by Roger Pocock →
This entry was posted in Anime, Television and tagged Christmas, K-on!. Bookmark the permalink.