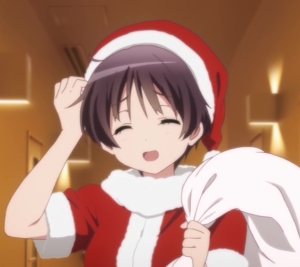 The Junkyard presents a bonus article about the OVA episode of anime series Love, Chunibyo & Other Delusions: “Sparkling… Slapstick Noel”.

“Christmas means something different to everybody, doesn’t it?”

What is Christmas a time for? Family, friends, loving and giving? Good will to all men? Partridges in pear trees? For anime it often means romantic comedy. The backdrop of Christmas celebrations provides an opportunity for two people to get closer. At least, that’s Nibutani’s plan for Rikka and Yuuta, when she realises their boyfriend/girlfriend relationship isn’t progressing beyond feeling generally awkward around each other.

“It’s almost Christmas, right? We can use that to our advantage.”

The rules of this kind of story are simple. It has to go wrong before it goes right. You get comedy and frustration and then the pay-off at the end that makes you go “awwww”. So everything gets in the way of Rikka and Yuuta getting some alone time together. Firstly their romantic Christmas becomes a Christmas party for the whole club. Dekomori’s huge house provides a great backdrop for Christmas romance, but that means Dekomori calls the shots on her home turf, and Dekomori is not happy with Rikka and Yuuta’s relationship. There is a yuri subtext bubbling under the surface of this series (the episode starts with Dekomori having a rude dream about Rikka, after all), but even without that it is a very simple equation. Until Yuuka burst onto the scene, Rikka and Dekomori were the most important people in each other’s lives, and now that has changed forever. Dekomori isn’t responding well to that.

So we have the perfect situation for a battle between Dekomori and Nibutani, with one of them working for the good of Rikka and Yuuta relationship, while the other tries to tear them apart.

“Somehow it feels like this has stopped being a game.”

Christmas for many is also depressingly about drinking too much, and that happens here by accident. Rather cutely, it only takes a couple of slices of boozy cake, leading to one of the weirdest fantasy chunibyo battles this series has given us. Kyoto Animation knew exactly what they were doing with this kind of explosive, fast-paced, spectacular animation, something that would have been impossible for many an animation studio, and even if you’re not a fan of the fantasy element of this series you can still appreciate the amazing quality of the animation. Christmas time can be a little bit crazy, and what better way to encapsulate that than a drunken fight in a land of giant food?

We finally get our romantic pay-off at the end, although this series remains frustratingly slow at moving the relationship along. The backdrop of the cruise ship lit up for Christmas is gorgeous, and we’ll have to settle for a linking of pinky fingers for now. There is a kiss, but the episode fully lives up to it’s “slapstick” title with an accidental smooch between two other characters.

As entertainment goes, this isn’t the most enlightened or erudite choice in the world, but maybe that’s not what we want at Christmas. Maybe a lot of silliness and a slice of boozy cake is all we need. Have a fun one.   RP

Author of windowsintohistory.wordpress.com Co-writer on junkyard.blog Editor of frontiersmenhistorian.info
View all posts by Roger Pocock →
This entry was posted in Anime, Television and tagged Christmas, Love Chunibyo & Other Delusions, OVA, Sparkling... Slapstick Noel. Bookmark the permalink.