Doctor Who: The Edge of Time

Posted on December 28, 2019 by DrAcrossthePond

When it was announced that the Doctor Who VR game was being released on November 12th, I couldn’t have been happier. So much so, that on the 11th, I set my clock ahead hoping to spoof the system.  I’d never tried it before and, for the record, it doesn’t do a thing short of making more work when you have to set it back.  You have to wait for the release date; no trickery actually accelerates time, but if there were a game worth testing with, it’s Doctor Who: The Edge of Time.

So the 12th rolls around, and I have to work a full day before I can come home, install it, and wait through dinner before I can try it.  Then, with dinner out of the way, I went into my computer room, removed the chair (it’s a small room and I knew I’d have to move around without hitting things), and launched the game.  Moments later, I’m standing in the menu area.  The TARDIS is standing to my left and I have hexagons in front of me but I don’t care about the setup or the credits at this point.  I want to start the game.  And so it begins…

The opening credits are actually worth mentioning because flying through the vortex in VR is a wild and someone disorienting experience.  The game starts you off in a laundromat.  You get a few minutes to move around the small room before the Doctor contacts you on the television mounted on a wall behind you.  Jodie’s face appears and she asks for your help because, obviously, you’re the only person in the universe who can.  Duh!  The entire first mission is effectively an escape room.  You need to find the right combination to get a safe opened and retrieve your sonic screwdriver.  This is an excellent method of providing a tutorial.  You can attempt using a digital lock as much as you want, but until you find the right code (found as two sets of double digit numbers), you really can’t type the code even if you know what it is from a previous playthrough.  It’s might be that it’s too cumbersome on the VIVE.  Perhaps the Oculus, which has exhibited slightly better finger-control, would allow this, but I was utterly unsuccessful at pulling this off.  It’s a minor quibble; the impact to the game is negligible because ultimately, you do want to find all the codes.  Once you retrieve the sonic, however… that’s a game changer.  For the record, I have the sonic prop and that’s a great little toy, but getting it in the game and watching it actually do things?  That’s awesome.  The game gets moving once you get outside the laundromat.  In a small junkyard, you have to assemble 3 items to send a signal into space and call the TARDIS.  A Dalek saucer appears and blocks the signal but with a little jiggery-pokery, you’re able to summon your ship. 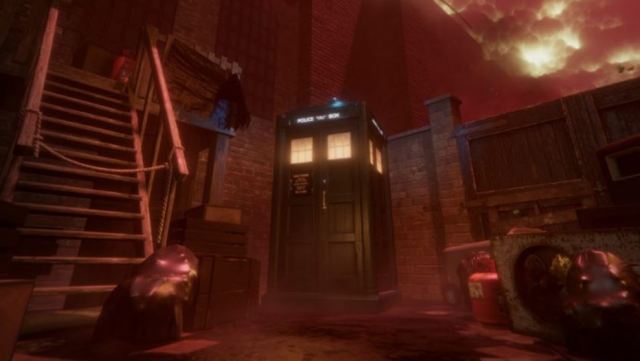 This was one of those moments.  When that wheezing, groaning sound can be heard and you can see the TARDIS materialize in front of you… excitement and the chills can barely be contained.  Watching the TARDIS materialize in front of you in full surround 3-D… that’s a sight to behold.  The music is playing and it’s glorious.  And I knew that no matter how long the game was, it was worth it.  And there are some stellar moments in the game too but I won’t go heavy on pictures because they are just that: pictures.  You need to experience it in full VR to really appreciate it.  And I can tell you, I took extreme delight in stepping out of the TARDIS in a destroyed Victorian house where the outside was visible all around me, looking at the ship and seeing into the TARDIS.  I moved to the left and right in awe.  Victorian background… insanely deep TARDIS interior… Victorian background…  It was wild and something that can be captured with such clarity in virtual reality.  Another great moment is encountering the Weeping Angels.  Truly unnerving but wonderfully exciting.  The puzzles themselves are not terribly difficult though there was a mirror/laser reflecting game that took me enough time to figure out that I almost looked for a walkthrough.  I did not, but it was close.  I imagine if I go back for a second play-through, I will fly through most of the puzzles.

Of the frustrations I had with the game, there were just three things I didn’t appreciate.  The worst was when we first arrive in the TARDIS, the Doctor walks you through how to use the console.  This sounds like a great thing but you never need these things again.  But that’s not what bothered me.  There’s some dial-turning needed and with the Vive, that was painfully difficult to do.  I tried a number of hand twists and twirls, but only succeeded in the end by luck.  It’s the only time the movements were a burden.  Another frustration I had was when we have to step inside a Dalek and pilot it.  Now, this is also a wildly fun part of the game, blasting things from inside the Doctor’s archnemesis but there is a point that you are being shot at from all sides, yet you’re inside a Dalek that is being remote controlled.  You can’t really dodge because all you control is where you look and shoot.  I must have died there 6-7 times before I finally pulled off the escape, but it was a little annoying.  And I don’t mind challenges but I do mind things where you have so few options.  I wanted to be able to dodge by lunging to my left or right, or ducking.  But no! It wasn’t to be.  My last gripe is only in the direction the Weeping Angel puzzle goes.  You have to turn a knob to generate electricity, and when you do, you can get in an elevator.  Great!  But you have to do it three times.  It felt like a copout.  Why did we have to do it three times, and if we did have to, why couldn’t we get some variation on the setting.  All three times, even though you’ve gotten into an elevator and “escaped” a floor, you’re back at the same thing again.

On the other hand, some of the monsters look great and there are some jump scares that are immensely fun.  The main boss battle is not a horribly challenging one, but that’s how I like it.  I may be an oddity, though: I love video games, but boss battles typically annoy me.  I far prefer the bulk of the games I play where we are actually playing a game, rather than pulling our hair out fighting something that’s designed to put you on valium.  Another really nice feature of the game, for a guy who doesn’t have a ton of space to move while playing VR, is that you don’t need to move around that much.  You can use the Vive controller to point and move.  Some games make it where you physically have to move around and this has lead to many a smacked counter, desk, collectible, etc.  So that was a really nice feature.

I often talk about the dollar-to-hour ratio for games.  Typical video games should give us at least a dollar per hour but in some cases $2 per hour is not bad.  So if I’m paying $50 for a game, I expect to get an absolute minimum of 20 hours out of it unless it’s offering me something astounding, like good art or something.  That said, VR falls into a different category.  This game retails for $20 on Steam, but it has already dropped in price.  (I paid $27 for it.)  I’m not complaining.  I completed the game in two nights and got about 3 hours out of it.  That means I paid close to $10 per hour.  But here’s the thing: you’re paying for an experience.  In the case of this game, we’re also paying for a story in the Doctor Who universe where we can take part and for a few hours, be the Doctor.  And bear in mind, wearing a headset for any length of time is more draining than just sitting in front of a computer game.  And even if I didn’t have to move that much, I was standing for all 3 of those hours!

Overall, it may not be the best game we’ll ever have for Doctor Who, but it really captured the feeling of what a Doctor Who video game could be.  It’s a good start and I truly hope they make more.  If you’re not sure what to use that Christmas gift card on, I don’t think the Whovian in the family will be disappointed playing this game.  Plus, it gives us one more “episode” to enjoy while the Doctor is off our screens after this season airs.  Speaking of which, I wonder if I set my clock to Jan 1st, if I can start watching the next series of Doctor Who now?  No?  Worth a try, surely…  ML

This entry was posted in Doctor Who, Entertainment, Games, Reviews, Science Fiction, Thirteenth Doctor and tagged The Edge of Time. Bookmark the permalink.

1 Response to Doctor Who: The Edge of Time