The Prisoner: The Chimes of Big Ben 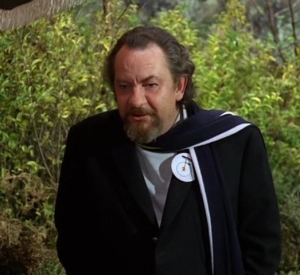 I presume at this point there’s going to be a different Number Two every episode, and it’s not just a chronic case of actors getting ill or something. Seeing a British television series from the 1960s is such a delight when it comes to spotting familiar actors, and I was particularly happy to see Leo McKern as this week’s Number Two. When I was a child I used to enjoy seeing him in Rumpole of the Bailey, which I suppose must be what he is best remembered for now, but I was also lucky enough to see him in a theatre production of Hobson’s Choice, in which he was magnificent. He’s definitely the most entertaining Number Two so far, delighting in Number Six’s sense of humour. Why he chooses to sit cross-legged in half an egg is a question that remains to be answered.

There are lots of those about. The question Number Two wants answered is why Number Six resigned, and he even offers his release if he answers the question. The question from our point of view is why Number Six is so reluctant to answer such a simple question. I think it’s unlikely to be something like sexual harassment in the workplace. Having watched this episode I feel we might be a little closer to answering that question – not the reason for his resignation, but why he is so reluctant to say why. It’s starting to become clear that getting out of this alive is going to be a massive challenge, and answering that question might just be the thing that signs his death warrant. Perhaps once the question is answered he becomes expendable. After all, Colonel J warns him of the situation post-escape, the very real possibility that he will be recaptured or killed. Oh, and that was another fun bit of actor-spotting: Kevin Stoney as Colonel J, complete with an outrageous moustache. And doesn’t Christopher Benjamin look young in this.

There was a new Number Eight this week, and she did a brilliant job of convincing us that she was genuinely scared and on the side of Number Six. Her betrayal was a repeat of a similar betrayal last week, so I was a little disappointed with myself for not guessing that, although I did guess that the whole escape was a sham. The moment where he stepped out from London back into the village still had impact though. How soul-destroying must that be.

But Number Six doesn’t appear to be a man who will be easily disheartened. There is a steeliness to him that Patrick McGoohan plays brilliantly. The look in his eyes when he puts the speaker in the fridge tells us everything we need to know, and observing his breakfast routine is also the moment that Number Two #3 realises he is going to be a hard nut to crack. You’ve got to admire the persistence of a man who carves a boat out of a tree (although that took a bit of believing), although it didn’t quite ring true that a clever man like him would not realise that it was blatantly obvious what he was building. Having said that, the use of the tapestry as a sail was a fiendishly clever and briefly euphoric moment, using the image of his captor as his means of escape.

That sums up this series so far very well, actually. Although some things take a bit of believing (e.g. the water balloons that can capture a swimming woman and then drag her to shore), this is a hugely inventive and clever series. Just look how Number Six is becoming indoctrinated himself. You could argue that he’s being tactical or ironic by playing along with things like the village salute and the chess games, but he is also falling into the role of acting as a guide to newcomers, and an enigmatic guide at that.

“Who are these people? Why are they here?”
“Why are you?”

It’s the sort of frustrating non-answer he was being given when he arrived himself. Number Six is becoming a villager.   RP

In Arrival, we met a guy named Cobb when #2 employed the old sick friend ploy.  I knew a guy named Cobb once; nice guy.  But I had no idea his initials could stand for Chimes of Big Ben.  (If not for that accursed “The”!)  This time, #2 will employ a variation on the disorientation ploy.  The Chimes of Big Ben is an interesting episode.  First off, we get the entire opening with that marvelous dialogue.  I found it very interesting that Leo McKern (the best #2) says “we want information” but then the subsequent times the word “information” is echoed, it’s by another voice.  And the way it was spoken sounded suspiciously like “in formation”, which is also fascinating for a village that wants everyone to conform, to fall in line…. In formation.

Also, it’s the second in the series but it seems like a lot of time has gone by.  Let’s review the evidence: #2 asks #6 if he remembers his first day in the village.  Clearly this wasn’t a recent thing.  Well, maybe that’s a conversation starter, or maybe this #2 doesn’t know how long 6 has been there, but that’s not the only evidence.  #6 knows the price of many items in the village.  When speaking to Nadia and Tobias Vaughn The Colonel (Doctor Who’s Kevin Stoney) 6 quotes the price of different things.  If he were only in the village a short time, I don’t think he’d be able to quote prices to such an extent.  And when Tobias The Colonel is speaking to #6 in all his nasally glory, he states: “and then after a gap of months we hear you’re coming back from the other side of the iron curtain!”  Just how much has #6 endured so far?  One might assume quite a lot because 6 tells #2 that he’s going to do better than escape, he’s going to come back and destroy the village.  This is no longer an escape plan; this has the hallmarks of revenge!

This episode is also very structured.  Act one is all about getting #6 involved in what they are doing to a new recruit, #8, also known as Nadia.  When Nadia convincingly tries to electrocute herself, 6 offers to let the second act start: he’ll partake of the coming art show if they stop torturing #8.  (This also begs the question again: how important is he if his collaboration is more important than extracting data from Nadia?)  Act two is about 6 building his escape. (Mind you, this boy can cut down a tree and do some intense work in a day!  Pretty impressive!) “It means what it is!”  Act 3 seems him winning the contest, as we knew he would, and escaping the island.  Act 4 is the travel he goes through and subsequent arrival in London.  As was the case with those in charge of the village, we learn surprisingly little about #6 during this time.  We only learn that he is not married.  When Nadia asks if he is engaged, he tells her to go to sleep.  One thing we might speculate is if his name is Bill.  This comes from the dialogue with Nadia about Big Ben, which she erroneously calls Big Bill.  6 seems to like it and as she says goodnight to Big Ben, he prompts her instead to go with Big Bill.  From that point on, she calls him Big Bill.  Is this just being playful?  Probably.  But maybe he liked hearing someone say his name?

There are some items of note.  The “whole world as the village” speech is impressive.  There are people wearing bikinis and there are people wearing scarves.  What the hell is the temperature in this place and where are they exactly?  (This can be a subsection of the Disorientation Ploy, for the record!)   And that leads to Nadia.  She says the village is near Lithuania and the travel by boat seems to support her as far as distance goes, if one can assess based on what they go through, but once they are put in a box, what more do they really know?  Ok, for one, #6 should have been far more concerned when they escape the white balloon and find a guy on the shore waiting for Nadia.  How on earth did he know she was coming?  I was always convinced that would have something to do with the resolution.  But after that, from truck to cargo container, to airplane, everything tallies time-wise.  But as we saw in the London office, how much of what he experiences is real?  Even though he can read his watch while in the crate, there are clearly no holes by which he can see out, so he has to assume everything he sees and feels is real, but as with the cars and the Chimes of Big Ben, all of that was a recording.  How hard would it be to simulate a 12 hour nightmare travel via every transport available?  For people of the village, not very hard at all.

Nadia and company remain surprisingly stoic as 6 realizes he’s been tricked.  “Don’t worry.  It was a good idea and you did your best.  I’ll stress it in my report,” she says.  To whom??  The prison doors slam shut and #2 has to use another tactic to trick #6.  But that will wait for another week.  Or a day.  Or perhaps a year… who knows how much time goes by between episodes?  That would be telling….  ML

Read next in the Junkyard… The Prisoner: A. B. and C.

Co-writer on junkyard.blog. Author of windowsintohistory.wordpress.com. Editor of frontiersmenhistorian.info
View all posts by Roger Pocock →
This entry was posted in Entertainment, Reviews, Science Fiction, Television and tagged The Chimes of Big Ben, The Prisoner. Bookmark the permalink.