The Man Who Never Was

Posted on January 9, 2020 by DrAcrossthePond 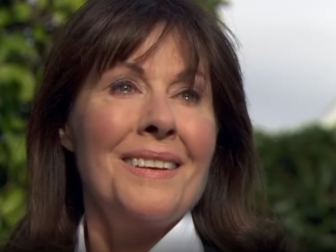 The Sarah Jane Adventures comes to an end, not with a bang, but with a soft, silly story perfectly capturing the spirit of the show.  The series was chock full of strong episodes but the overall idea behind it was a kids’ version of Doctor Who.  Even the opening music bursts onto our screens like the opening of Who, complete with a swirling wisp of a vortex.  So for the final episode we get a kids’ story about the launch of a new iPad (called the Serf Board) and a spokesman who is really a hologram controlled by cycloptic Jawas.  This is crazily appropriate for a story about slave trade and aliens using technology to make money, considering Jawas were responsible for selling droids to Luke Skywalker in Star Wars.  Oh, did you see what I did there?  Yes, Luke is back in this episode to fight alongside his sister, Sky.  (See?  Luke… Sky…)  There’s even a guy named Harrison… not quite as cool as Ford.  And Ben Kenobi was introduced as a hologram, wasn’t he?

To control this hologram, the Jawas have the most idiotically contrived set of controls that would never work to control all of the moves of a real person, but that’s part of the charm.  It’s not intended to be a big budget SF story.  These Jawas will never be remembered like their Star Wars counterparts and that’s fine.  This series focuses on something else: being family friendly and appealing to a large audience.

If there is anything wrong with this episode, it’s Adriana.  It’s not that she was bad, but I really wanted to see Ellie return.  It would have been a great series finale if Clyde and Ellie were reunited.  Well, and I might just have to question why Sarah Jane would change out of her disguise just to put her own clothes back on, but really, these are minor gripes.  There was a lot of heart in this episode, like so many others throughout the series.

To appeal to the Who fan, there’s a TARDIS toy sitting behind Clyde in the attic.  To appeal to the parents watching, there’s plenty of witty humor.  Clyde’s “I’m delicate…. in a very manly way!” made me laugh out loud but not nearly as much as the Morse code moment.    As the code is coming through, Mr Smith reads out loud, “Grab … Harrison’s… pen.  Full stop.”  Clyde says “I’m so glad to see a full stop!”  I also found Harrison’s offer of “Tea?  Coffee?  Anthrax?” subtly funny.  And possibly the best was when Sky takes over the Serf Hologram and realizes he’s supposed to be American and suddenly we get some very colorful colloquialisms pulled right out of Toy Story.  UNIT even gets a mention in the end.

To wrap the series, I was glad to have Luke back, and I misspoke in my previous episode review: Luke is still mentioned in opening credits.  And I wouldn’t have it any other way.  While Team Attic have to be kept apart for a good deal of the story, their chemistry shines throughout the episode.  The bond between Clyde and Rani is as strong as ever earning them the nickname “Clani”.  Luke’s eyebrows are still overly intense, but when he gives his sister a poster for her room showing his acceptance of her, I might have gotten a bit misty.  And Sarah Jane… my first companion, always the best.  None will ever compare.  It’s a fun episode where she basks in the glory of having her whole family together again: her genetically engineered boy genius, her schoolgirl investigator, her adopted daughter from another world, and her ever-ready Clyde.  A perfect finale to a wonderful show.

The ending monologue, coupled with a montage from past episodes, once again reminds us that life on earth is an adventure and family is the most amazing thing we can ever have.  To the Doctor Who family, The Sarah Jane Adventures is timeless.  To pull the very quote out of the end of the episode:

And the story goes on…

2 Responses to The Man Who Never Was