Posted on January 16, 2020 by DrAcrossthePond 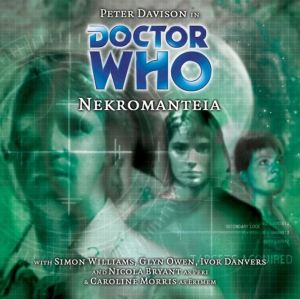 Maybe I’m becoming too old fashioned and a bit cynical in my old age.  I remember when these CD’s would show up on my doorstep and I’d be super excited to listen to each one.   I’m not saying I’m not enjoying them, but when you’re listening to something casually, you let things go.  When you’re listening critically, you have a different focus; you’re ready to talk about various elements and what do we talk about normally?  Things we love, and things we hate.  Let’s be honest, we’re never going to get into a deep and meaningful conversation about flip-flops because, who cares?  They go on your feet to protect them from the hot sand at the beach.  Can we really get deep about that?  But open a conversation about the final season of Game of Thrones and you open a can of worms with it.  It’s a question of things we’re passionate about, and I’m a Doctor Who fan for something very close to 40 years!

I went into Nekromanteia without looking at the cover so I wasn’t to know right away that we were getting that powerhouse team of the Fifth Doctor, Peri and Erimem until after the first thing that derailed me: the voices of the Witch.  Like many of you, the Wicked Witch of the West was one of the earliest witches I’d ever seen or heard on television and the handful of cartoon ones that may have come along in my youth sounded like her anyway.  So hearing the opening with the witch-voiced creature and that shrill, high pitch… it put me off from the start.  So what might have been promising was starting off as anything but!

That’s not to say there weren’t things that improved the listening experience.  Like their last outing, Erimem is still new to the crew and has plenty she doesn’t understand so when Peri mentions coming back in 20 minutes, she has to ask if Peri has such a precise ability to measure time.  Peri has to explain that she has a watch.  It’s a tiny, perhaps even inconsequential line, but it reminds the audience that Erimem is not from our time and has a lot to learn.  I loved that someone refers to the Doctor as “Mr. Beige”, considering the colors of his clothing.  And the episode does feature some impressive cliffhangers, including Erimem being shot and the Doctor being killed.

But this is probably the point that lost me the most.  The Doctor’s head is ripped off (which isn’t my issue) but he’s brought back by magic, by Shara.  And what exactly was he?  A god?  The whole “you’ve died so I took you to a cricket match, old boy, but I’ll magic you back to life because you’re really good” doesn’t work for me.  The only Deus Ex Machina I really go for is the video game of the same name, not the get-out-of-death-free writing style.  I should probably take issue with the brutality of ripping off someone’s head, but then I’d have to take issue with someone having his tongue cut out.  I don’t want to get all high and mighty about such things though, because then I’d have to shoot myself straight to the gutter because of Peri.  She wakes up naked (she had to be bathed for sacrifice) and seems to remain that way for the bulk of the story.  (Her rescuer claims that he’s “trying not to think about” but I don’t buy it!  In fact, I bet I know why he rescued her to begin with.  I digress.)  And she tells him she has the word “trouble” tattooed on her ass.  (How much you want to bet that he checked when she wasn’t looking?)

And then we have the ending, which was like Deus Ex Machina 2… not the sequel to the first game, but I mean, squared, I just can’t get that little two to pop into the corner of the word “machina”… because throughout the story, for some odd reason, Erimem is wandering about the planet with her cat.  Look, my cat thinks he’s a dog and comes to greet me when I get home at night.  He even walks to the car when I get out, but most cats don’t do these sorts of things.  So we knew somehow Atronach was going to play a part in the resolution, which should have felt “oh that was convenient; didn’t see that coming” but instead feels like “Oh, just let the cat absorb the god, so he can be out of the TARDIS already!”

Considering this team-up, I expected far better.  The only consolation is that I have a very good imagination and this one at least offered some reward for such a trait.  (I even imagined the word “trouble”…)  ML

This entry was posted in Audio, Doctor Who, Fifth Doctor, Reviews, Science Fiction and tagged Nekromanteia. Bookmark the permalink.