Posted on January 23, 2020 by DrAcrossthePond 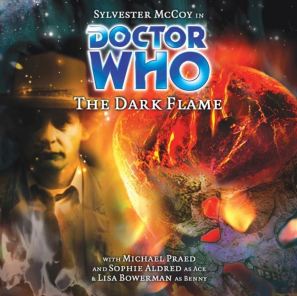 Big Finish puts out some great audios but even 42 episodes into their Doctor Who main range, they still struggle with some place settings.  The Dark Flame is one such story.  To describe the planet, they rely on two people talking and discussing where they are as one looks out the window.  This same trick is later repeated by Benny Summerfield to drive the point home.  It works, but it comes off feeling cumbersome, like the was no better way to do it.  We get it: dangerous planet, all sort of storms… the works.  In fact, the story didn’t win me over right away; there were too many cliches (and they ran throughout the story) that I’ve seen done too many times before.  You’ve got the creepy sounding evil scientist, Slyde.  You’ve got the secret enemy in the ranks.  You’ve got the mysterious employer.  You’ve got a transmat to a devastated planet.  And to top things off, you even have mind control of a companion, getting them to refer to the evil one as “Oh, Master”.  (Because anything else wouldn’t have sounded pompous enough!)

But what surprised me is how much fun I had listening to this story anyway, despite its shortcomings.  I was dumbfounded at how many outstanding lines Benny has.  Lisa Bowerman clearly has fun with her character and it actually made me want to purchase some of the Bernice Summerfield Big Finish audios.  She has a great banter with Sylvester too.  There’s a subtle inflection in McCoy’s voice when she reminds the Doctor how much she loves being cooped up in a dungeon; the “I know” that the Doctor says is particularly agreeable and funny.  You get the sense that the actors get along well just by the jovial dialogue.  Even Slyde has an outstanding line at the start of the episode when the TARDIS arrives.  Lomar makes the standard comment of awe while Slyde says simply,  “Ludicrous!”  I even chucked as the Doctor says the he doesn’t trust people who hide behind titles.

The idea behind the episode was, as the title suggests, dark.  Yet another power from another universe is going to be resurrected, wiping out life universally. Its agent is a corpse that has been stabbed through the eye and is decaying at an alarming rate.  He can resurrect skeletons and make them do his bidding.  And he can control the minds of others, including Benny who, under his control, beats the hell out of Ace in what sounds like a violent beating.  Ace however does not seem that hurt from it.  Maybe it’s the lightweight combat gear she’s wearing that protects her.  (I like the reference to her time away from the Doctor from the New Adventures range of books!)  Ace was, to my horror, the lamest character, but I attribute that to the “talk too much” writing style these writers have.  I’ll explain…

The Doctor picks up a mysterious message through time to go to the planet Marran Alpha.  The message is sent by a friend who is clearly in pain.  They arrive and meet the friend who is his regular, happy self.  So what  does Ace do?  The same as dozens of characters in the last 42 audios… “Isn’t that your friend who was in agony sending messages through time that clearly haven’t been sent yet and my talking about it may disrupt the future, but I’ll pseudo-whisper and because he’s clearly British, probably can’t hear me anyway?”  The Doctor says “not now, Ace” because what can you say?  “Hey, you’ve been traveling with me for ages; don’t you know how this works?”  How about “the audience listening isn’t that dumb, Ace!  They can figure it out without you spelling it out!”   If I had one recommendation for future stories it would be: STOP thinking the audience needs that much hand holding.

But despite this, I enjoyed the story overall, and just attribute that to poor exposition.    Barring that, I found myself deeply engaged by part four.  Vilus Krull was reminiscent of the Emperor from Star Wars and I really liked his villainy.  Yeah, the whole “opposite” thing was silly, but I did like listening to him; there was an actual sense of jeopardy and McCoy’s screaming sold it well.   I did feel the final battle was a bit contrived, but I do love it when this Doctor has a master plan.  That was McCoy’s trademark strategy and it’s nice to see that back in action.  There are some great cliffhangers too, with Benny being transmatted down to a dead planet and the reveal of an enemy agent, to name two of the three!  I was even willing to accept the happy ending knowing it was a paradox that was created, even though I think it was handled poorly.  (The Doctor says “shhh” as if that will prevent the paradox from knowing it was, in fact, a paradox!)

What’s the opposite thing, I hear you ask?  It’s when someone says it’s getting cold and the evil guy says (and I’m not kidding), “that’s the heat of the dark flame you’re feeling”.  So, cold is hot if it’s a dark flame?  Is that because flames are not dark, so to have one is opposite?  Why not just say it’s cold?  Well, two can play at that game, so I’ll start there.  ML