“The teacher doesn’t care about me any more.”

There seems to be more going on that meets the eye in Satoru’s class at school. Firstly, some of the girls are competing for the attention of the teacher:

“What a bunch of flirty little tramps.”

Like a lot of plot points in Erased, we are left to ponder about whether this has any significance or if it is another red herring. After all, this kind of interaction between students and teachers isn’t necessarily something out of the ordinary. Similarly, Kenya is still having one-to-one meetings with the teacher, but we have never been party to what has been said, although one of their meetings this week has to be to do with delaying Kayo and Satoru while their surprise party is being set up. Are all their meetings so innocent?

We get further evidence that Revival is a melding of Satoru’s 29-year-old and 10-year-old personalities rather than just a man inhabiting his younger body, with his continued embarrassment about dating Kayo. I suppose it would be possible to interpret the attraction as something unsavoury, but that wouldn’t fit with the narration and wouldn’t explain Satoru’s red cheeks in front of his mother and his classmates. That’s very much a child thing. As a bit of welcome relief from the tension, it’s being played for laughs at times, such as when he blurts out “damn, you’re pretty!” in front of the whole class.

Their growing relationship is innocent and beautiful, and by 1st March (Day X) they are holding hands on their way to school. Once again Satoru worries if he is really changing things enough, especially when he realises that his date with Kayo duplicates a chance meeting with her in the science museum that he remembers from the first time round.

“Am I just repeating things?”

But he’s not. He is clearly changing things. The question is whether he is changing them enough. For a glorious moment it seems like the answer to that question is yes. The memory of Kayo alone in the park fades away to be replaced with a shot of Kayo and Satoru holding hands, accompanied by some wonderfully euphoric orchestral music (by the way, the music in this whole thing is fabulous and often fiendish in the way it misdirects our emotions).

“I did it. The day is over. I changed history.”

Then he gets his reward: a perfect day, post-murder in the original timeline, with a joint birthday party. There have been moments of fleeting happiness for Kayo, but this is different. Finally she looks like her life is full of hope and happiness and her smiles look genuine. It’s just about the most heartwarming thing I’ve ever seen in an anime. And then, after Kayo’s promise to give Satoru his birthday present the next day, the rug is pulled out from under us in the most cruel way possible.

“That promise she made me: she never got to keep it.”

We might have known it. Keeping her safe on Day X just wasn’t enough. He changed history, but he still left the murderer at large. All he changed was the day… 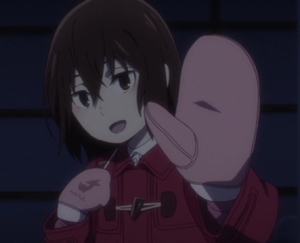 But that wasn’t quite all he changed, was it. In the original timeline Kayo died a miserable, lonely, beaten, friendless child. In the new timeline she died after a perfect birthday, spent happily with her gang of friends and boyfriend.

That was the discussion point between my wife and myself after we watched this episode. Satoru’s actions were never in vain. He gave Kayo a happy final day on the planet. But we’re only four episodes in. Where do we go from here?

And what an amazing four episodes, and what a remarkable episode this one was in particular. It took us on a journey from joy to despair. It was a roller-coaster of an episode that left this viewer more than a little emotional at the end, even on second viewing. Even though I value a happy ending and this episode does quite the opposite, if I had to pick one single episode of an anime that is the greatest thing I’ve ever seen, I would struggle to think of anything better than this. It’s an absolute masterclass of storytelling from beginning to end. And it teaches us a simple and important lesson, by spelling out for us exactly how Kayo’s life was transformed in her final days:

“Friends are the best. No doubt.”

What a triumphant episode.  Up until this point, I wasn’t sure if Satoru’s work was all in vain or not.  The whole episode is a waiting game; waiting for a shoe to drop; or at least that was how it felt.  Periodic intervals where Satoru sees a repeat of something from the past makes us wonder if he’s just going through motions, or if he really is able to change things.  When he’s in the museum with Kayo, I really wasn’t sure if we were in for a surprise or not.  I mean, were we being brought down a blind alley?  Last episode ended with the wonderful trip to the Christmas Tree, where Satoru realizes this time he wasn’t alone, so I really thought it was showing us that he could change the future, but it wasn’t until this story that really made me believe it.

It’s during the scene when Satoru is walking Kayo home and they are holding hands, walking past the park where Satoru remembered last seeing Kayo alive.  The image of her standing there alone fades and we realize he’s done it; Satoru has changed history.  It’s a brilliant image, both artistic and wonderful.  “Lone Kayo” vanishes and “Kayo with friends” carries on.  The birthday party, complete with delay tactics by the very kind school teacher, is touching.  In all respects the days this episode takes place during (2/25 – 3/2) is pretty slice-of-life with two kids who have become friends and changed history just by being friends with one another.  It’s a testament to the power of caring for one another.

Speaking of caring for one another, it’s a magnificent scene when Satoru’s mom shows up in time to prevent Kayo from getting smacked.  The mother/son bond is a lovely thing that is gently explored through this series so far, but what’s more impressive to me is the wisdom the mom shows in understanding her son.  While he may think she’s a witch, she’s a mom, through and through.  And Satoru shares in some of that wisdom as he realizes Kayo was targeted because she was a loner and she is no longer alone.  She arrived on time for class on Monday the 29th.  Her lost shadow self is gone from the park.  She was able to spend her birthday with friends.  Satoru’s joy is overpowering and we feel his triumph… no, his accomplishment with him.

And then the other shoe drops.  Kayo doesn’t show up for school the next day.  Or the day after… Her promise is left unfulfilled.  And a part of my weeps inside for the little girl who was lost, no matter what Satoru did.  Surely that’s not where her story ends.  Is it?  ML

Read next in the Junkyard… Erased Episode 5

Author of windowsintohistory.wordpress.com Co-writer on junkyard.blog Editor of frontiersmenhistorian.info
View all posts by Roger Pocock →
This entry was posted in Anime, Entertainment, Reviews, Television and tagged Erased. Bookmark the permalink.