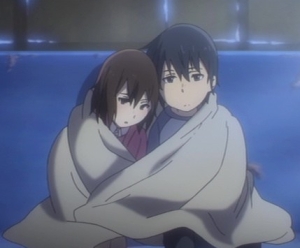 Whether it’s sheer willpower that takes him back, or heightened emotions, or his prayers being answered, Satoru returns to 1988 and his date with Kayo at the museum. Understandably, the tears flow. This time he can’t make a mistake.

We continue a couple of important themes that have been bubbling under the surface of Erased. Last week, Satoru wanted to give Airi some words of hope and asked what a superhero would say. This week he has to come up with some kind of an explanation for the extraordinarily perceptive Kenya, and this is what he says:

Kenya seems to be the cleverest 11-year-old in the world, realising that Satoru isn’t the same person he used to be, and testing out the theory by making up the title of a book that he never actually lent to Satoru (it’s not a real book title, in case you’re wondering).

He’s incredibly astute, and a powerful ally. There is always a nagging feeling on first viewing of Erased about whether he can be trusted. After all, we have seen him having secret meetings with Gaku Yashiro, so could he be part of some shady conspiracy? He does come across as totally genuine and trustworthy, but the writing is clever and we can’t quite be sure.

Another clever bit of misdirection this week happens when Satoru visits Yuuki, planning to give him an alibi. We know that he’s not the murderer, but it hasn’t been entirely clear up to this point if he has paedophile tendencies or not anyway. When Satoru tells him that he is dating Kayo there is a fleeting moment when Yuuki appears to be shaking with jealousy and Satoru is getting ready to defend himself with a craft knife… and then the tables are turned on us and it becomes clear that Yuuki is simply experiencing powerful emotions at the thought that this poor, lonely, beaten child is no longer alone. He cares deeply for the welfare of the kids he knows. It’s a great bit of writing.

From then on, Satoru starts changing events dramatically, providing Yuuki with an alibi and getting Kayo to agree to him “kidnapping her”. He comes very close to killing Kayo’s mum, and here we come to the other major running theme: the importance of friendship. Kenya stops him from going too far, and does so simply on the grounds of logic: if Satoru kills her and gets caught, the game’s up for him and he can’t help Kayo. Again, this is great writing. If Kenya appealed to Satoru on a moral level it would be hard to side with him. He would still be right, but we’ve witnessed the monstrous actions of Kayo’s mum and we’ve seen her smile while she disposes of her dead daughter’s possessions.

Thinking back to watching Erased for the first time, it provides a viewing experience that can’t be replicated the second time round. Satoru’s attempts to save Kayo (and his mum) have failed once. In fact, everything he has tried to do has failed, other than giving Kayo a happier last few days (which is important). So when we see things apparently going well for him, we can’t help but expect something to go wrong. When I watched this the first time I was on edge through this whole episode, and the ending seemed to confirm my suspicions.

This is a fabulous “water cooler moment” series. It’s such fun to discuss after each episode, and the topic when I was chatting to my wife about this episode the first time round was very much about the mistakes Satoru was making and what we would do differently. Surely he’s trusting too many people? Surely too many people know where Kayo is hidden? Surely it would be easy to find her because of the tracks in the snow? Surely one of Satoru’s friends is betraying him? But we were forgetting the key theme of Erased: the importance of friendship. Sometimes you just have to trust people.

Either way, with somebody entering the old bus where Kayo is hiding, are we about to see Satoru fail again?   RP

Satoru was arrested at the end of the episode 6 and I stayed my hand at immediately watching another episode.  That wasn’t easy.  I wanted time to digest what happened.  Two days later, I started episode 7.  Out of Control opens with a recap and picks up at that moment right after Satoru noticed the watcher.  He’s about to be pushed into the police car when he screams “Go back”.  There is an incredible effect of “negative lighting” the scene, coupled by a blast of music and a freeze frame image… and he’s back in the past with Kayo.  There was no doubt in my mind that he’d go back, but it was a question of how he’d do it.  This gives him a second chance to correct the death of Kayo.  It’s also his last chance, as he says “this is my last revival!”  We now know he will not get another chance after this.  He has to get it right.

Today I had a conversation about superhero movies.  (For the record, today I’m still back in 2019; this article is a time traveler’s dream, rather appropriately.)  The conversation was regarding good superhero movies and TV shows.  It seems I chose a good day to watch this episode; a day when I should be talking about Erased as another good superhero series.  It comes about this way… Satoru is lured into talking to Kenya by a comment about a fake book.  Kenya goes all Vorlon on Satoru, asking “Who are you?”  The scene is heavy with drama; a big moment as Kenya begins to figure out that something is different with Satoru now.  Satoru has the chance at a big reveal; something truly inspired…  he thinks it through, struggles, and upon imagining a Power Ranger, he blurts out “I’m a superhero”.  While it’s a laugh out loud moment, Kenya draws the point home later, when he compliments Satoru for trying to save Kayo.  “You already are a superhero.”  And like a good superhero time traveler, that means he has to do some things to prevent a calamity.  One of these moments leads him to nearly pushing Kayo’s mother down the stairs, and that’s when Kenya turns up.  And that’s when we really see a band of heroes start to form.

The episode is a testament to something I believe in very strongly: Friendship.  Friendship often comes about when we are kind to people.  It’s part of why I loved Capaldi’s final advice in Doctor Who: “love is always wise, and hate is always foolish… always try to be nice, but never fail to be kind”.  Friendship is a magic bond and can bridge time and space.  It defies all the laws of nature.  Even the first Doctor pointed out in Twice Upon a Time, good should not win.  But it defies the odds, and that’s because of friendship.  I have friends who have been brothers and sisters to me for over 30 years, and many span continents.  My family are friends as well; the distinction being that you can’t choose family but you can choose friends and I am very close to my own family.  When we help each other, we grow and become better.  We find joy in helping each other.  In many ways, we become like superheroes.  If you think superhero stories mean action and explosions … you’re only seeing a small part of the picture.  Doctor Who and Star Trek  are both about superheroes because they show us that there is someone who cares enough to put themselves on the line for others.  And that’s what Satoru is willing to do, and when he does it, others follow.  Satoru gets it: love is wise, being kind matters.  Satoru is a superhero whether he succeeds or not.  But I sure as hell hope he succeeds!  ML

Read next in the Junkyard… Erased Episode 8

Author of windowsintohistory.wordpress.com Co-writer on junkyard.blog Editor of frontiersmenhistorian.info
View all posts by Roger Pocock →
This entry was posted in Anime, Entertainment, Reviews, Television and tagged Erased. Bookmark the permalink.