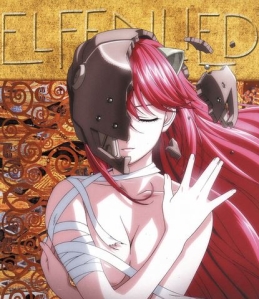 I’m not keen on violence in television and film so I never expected to enjoy a series like this, packed full of dismemberments and bodies being sliced and diced in any way possible. If you can’t stomach blood and gore you probably won’t get past the first scene of the first episode. If nudity offends you then you might not even get past the opening titles. This is strong stuff, but the storyline is fascinating and compelling and drew me in almost immediately despite my misgivings.

The plot concerns a mutant species known as Diclonius. Visibly they look the same as us, apart from a couple of small horns on the head, which can of course be easily concealed. But they have an ace up their sleeves (or rather, behind their backs): extra arms, known as “vectors”, which are invisible, deadly and extend for a great distance. It might sound like a weird idea, but the animators really make it work convincingly.

The series has a lot to say about the harm humans do, particularly scientists. They go to great lengths to rationalise their cruel experiments on the Diclonius by the risk they pose, and it is indeed true that the main character at the very least is capable of snapping into a split personality and creating mass murder of innocents, but she is driven to that by the most extreme form of bullying. Throughout the series it is the humans who are the monsters, while the Diclonius have the humanity and compassion, once they understand that the world is more than just the torture chamber they are familiar with. That’s not to say there aren’t good human characters. This series is all about shades of grey, every shade conceivable in fact. So we have a scale that has at one end the heartless torturing scientists and the brutal soldiers, and at the other there is Kouta, who takes in and helps anyone in need (although we can’t give him too much credit because they are all cute girls who sometimes don’t understand the need for clothes). In between we have the scientists who are driven to do what they do, and in the end one in particular has to learn what family really means and what matters in life. Nobody is a stereotype though. Even Kouta is indirectly responsible for a world of tragedy, thanks to one simple lie.

This is also a very clever series. Initially you might think things are happening by chance, such as when Lucy is discovered naked on the beach by Kouta, but she didn’t randomly get washed up just anywhere after her escape. The series gradually reveals the connections between all the main characters via flashback sequences, which add an emotional level to the whole thing. My only criticism is the penultimate episode, which reuses a lot of flashback footage, at a time when you feel that the animators should have been making the most of the available running time to bring the story to its dramatic conclusion. That is the only time this happens though.

There is a strong element of romance to balance against the horror, and it is a story of love conquering the most astonishing odds. It is also a story of forgiveness, although that’s not quite the right word. You’ll have to watch it to understand what I mean by that.

Only one of the main characters didn’t work for me, and that was Kouta’s cousin Yuka. She is an essential character but her obsession with Kouta and her jealousy starts to grate on the nerves pretty quickly. At least the series eventually shows us the consequences of all-consuming jealousy, in spectacular fashion. Apart from that they are a fabulous cast of characters, from the split-personality Lucy/Nyu, to the homeless child abuse victim, to the Diclonius sent to fight Lucy, to the brutal soldier who is obsessed with the girl who defeated him, to the scientist who has to make an impossible decision. Later in the series the threat level ramps up with the introduction of the mysterious “Number 35”, who is spectacular. But this is far more than a lazy series that simply raises the stakes with the boss level enemy at the end. Number 35 is a key character in her own right, an essential link in the chain of events, and has an emotional journey of her own which will leave you a blubbering wreck if you have a heart.

So my recommendation is this, with the proviso that the DVD release is a 15 and I’m surprised it’s not an 18: if you have an aversion to graphic violence and nudity in anime and you can possibly get past that, then try. Elfen Lied is a series that is worth pushing past those kinds of reservations for, if at all possible, because otherwise you are missing out on one of the greatest anime stories ever told. All aspects of humanity are to be found here, and the most human of all are the monsters.

We will be taking an episode by episode look at this series later in the year.   RP

Read next in the Junkyard… Elfen Lied Episode 1

Co-writer on junkyard.blog. Author of windowsintohistory.wordpress.com. Editor of frontiersmenhistorian.info
View all posts by Roger Pocock →
This entry was posted in Anime, Entertainment, Reviews, Television and tagged Elfen Lied. Bookmark the permalink.