The Prisoner: Hammer into Anvil 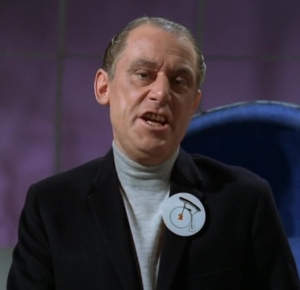 What an opening line! Immediately it is evident that this is going to be a very different kind of episode of The Prisoner, with Number Two showing a suicidal woman evidence of her dead husband’s cheating. As Number Six says, he is a sadist, and we have never seen a Number Two quite like this one. Something changes in Number Six when #73 dies, and you can see the moment where his resolve strengthens and his mood darkens. He is going to break Number Two.

“You shouldn’t have interfered Number Six…You’ll pay for this.”
“No. You will.”

Even before I started watching this episode the title gave me a clue as to what was going to happen. Goethe is referenced in the episode, but Orwell’s subversion of the metaphor is key: “In real life it is always the anvil that breaks the hammer, never the other way about.” That’s from Politics and the English Language, and Orwell was writing about “dying metaphors”, one step removed from dead metaphors, which I wrote a whole study about once for a college course. Dead metaphors are fully integrated into the language to the extent that they are no longer recognised as metaphors, whereas dying metaphors are ones where the original context is misunderstood and “have been twisted out of their original meaning”. So Orwell identified “the hammer and the anvil” as being twisted to represent the anvil being broken by the hammer, whereas in reality it is the hammer that eventually breaks. In the context of the Village, Number Two is the hammer and the prisoners are the anvil. This is the episode where Number Six finally has enough and turns the tables. The anvil breaks the hammer.

So with that in mind, it was pretty obvious from the outset what game Number Six was playing, and the minute he started listening to the six identical records and making notes it was clear that he was trying to make random actions appear significant. But the genius of this episode was the ways in which he convinced Number Two that he was being undermined and that Six was a plant leading a conspiracy. Instead of Number Six not knowing who to trust, all of a sudden it was Number Two who found himself in that position. It’s a gradual transition from sadistic boss to paranoid wreck, but certain key moments break him, such as the blank pieces of paper left in the boat. By the way, that day-for-night filming works well in the shadows, but not really out in the open.

The episode strained credulity a little, with the thought never once occurring to Number Two that he was being played for a fool. Although it was highly satisfying to watch Number Two’s breakdown, it might have been more realistic for Two to turn the tables back on Six in the end, bleak though that would have been. It’s just that when you add up all of Number Six’s tricks, which were increasingly silly, it’s hard to believe that Two wouldn’t figure out what was going on, especially the random number sequence and the morse code nursery rhyme.

Talking of silly, what was the point of that trampoline battle? It was such a weird little interlude and added nothing to the episode. Maybe it was to add a bit of variety to the obligatory physical fight of the week, having already given us the usual fist fight at the beginning of the episode.

The possible reappearance of Thorpe from Many Happy Returns as Number Two added credence to my pet theory of Number Six’s former bosses running the village, but I’m not entirely convinced that it was anything more than the re-use of an actor in a different role, which was such a part of the television landscape at the time. Either way, I’m delighted that they did re-use Patrick Cargill, because he was brilliant at portraying Number Two’s descent into paranoia and desperation, although his hair did a significant amount of the work. The moment he goes completely out of control, so does his hair.

“You’ve destroyed me.”
“No. You destroyed yourself.”

Most of all, I think this episode provided a roadmap for how to get even in life. I don’t mean to endorse sending somebody mad, far from it. But when the oppressed rise up against oppressors, it is far more effective to do that with brains not brawn. One piece of blank paper is worth a whole series of fist fights.   RP

We come at last to my favorite episode of The Prisoner.  I mean, Fallout is technically my favorite, but that’s more of an epic.  This is an episode and can stand on its own.  And in that regard, I love it.

#6 is walking around the grounds of the hospital, minding his own business when he hears a woman scream.  Naturally, he runs to her aid because while he may not trust women, he’s happy to protect them.  Scuffle, scuffle, she jumps out the window to her death.  The most sadistic #2 of all, Patrick Cargill (possibly the same fellow from Many Happy Returns – it’s never stated one way or the other) threatens #6 that “you’ll pay for [interfering]” but #6 simply replies, “You will.”  And thus begins a magnificent episode of #6 turning the tables.  Interestingly, this episode is about 6 getting revenge, not escaping!

First let’s talk about the sheer amount of classical references this episode has:  Goethe, Bizet, Don Quixote.  Ok, that’s three, which maybe doesn’t warrant the words “sheer amount” but it’s impressive and they are integrated seamlessly.  What you probably didn’t know is that Koshi should be a classical reference too. I mean, by God, jumping on trampolines with a pool in the middle… it’s turned into a sport.  What more could you want?!  I really want to play that game.

So I’m going to have some fun here as I talk about the mind games #6 uses.  When #6 sees that #2 is afraid of “our masters” and he plays off that.  He see #2 as the “weak link in the chain of command” and exploits it.  (Although one wonders why #6 didn’t do the same to Colin Gordon’s #2.  I’d argue that things were still in their early stages at this time and #6 has lost the desire to play fair.)  Regardless, here’s our list of fun strategies 6 uses on his captor.

The old secret message on an album ploy – this just causes #2 to listen to the same album a bunch of times while trying to figure out if there is a secret message.  Every crackle must have been infuriating!

The old accidentally left that note behind ploy – this is used twice; once on the newspaper and once on the writing pad.  There is a message, but it means nothing.

The old impersonating a higher authority ploy – D6 is clearly of greater power than regular #6, at least to #2’s awareness.  This makes #2 anxious and causes him to make mistakes.

The old secret message on blank paper ploy (fairly similar to the Accidentally left that note behind ploy) – put blank paper somewhere and let people wonder what the significance was.  Was it the number of pages?

The old psychiatry ploy – Call the psychotherapist and get the authorities to believe you have a secret relationship with them.  Now everyone is in on it!

The old secret song ploy – Ask someone to play a song for that “Special someone” when there is no special someone.  Drives the powers that be crazy.  “Who do they think they’re dealing with?  Pygmies!”

The old Radio message from a dead person ploy – Want to really anger the authorities?  Have a dead person send a special radio dedication.

The old “you called for me” ploy – want the authorities to question their own sanity?  Make an unnecessary trip to the office and ask why you were called.  Keep a straight face for added annoyance.

The old clock bomb ploy – nothing says I hate you like a clock bomb that doesn’t even have the decency to be a bomb.  Wasted effort to accompany the terror.  Awful!

The old carrier pigeon play – great if you want to find out if the authorities can shoot a bird out of the sky with lasers hidden in flagpoles.

The old nursery rhyme ploy – need to make #2 wonder if “It must be a special code”, Pat a Cake, pat a cake is great on any occasion!  Also good if you want to cause #2 to trip as he leaves the room.  (Though one might question who designed that doorway!)

The old morse code to nowhere ploy – signal a make believe friend.  Drive authorities crazy with this patented technique to have them searching the air, land, and sea for a mysterious recipient who isn’t there.

The old undermine the minion ploy – Do you hate that suck-up that’s always hanging around the boss?  Undermine him by making it look like you’re in cahoots with him.  Sure to break down any chain of command.

As #2 breaks, he dismisses the butler who actually looks like he’s ready to go.  I mean, that dude knew how to leave the village.  He was packed!  All 6 had to do was follow him!  Game over.  Didn’t he notice?? Or was he so happy with himself that he went back to his room and had a V-8 moment later?

This episode is all out fun.  If there is something to think about, I think it’s lost in the mix of brilliant mind games 6 plays with 2.  While I am glad most of them were more thought-provoking, I was delighted by the fun this one gave us.  I just wish #6 noticed the butler leaving.  “Ran him out of town like a common pygmy!”  ML

Author of windowsintohistory.wordpress.com Co-writer on junkyard.blog Editor of frontiersmenhistorian.info
View all posts by Roger Pocock →
This entry was posted in Entertainment, Reviews, Science Fiction, Television and tagged Hammer into Anvil, The Prisoner. Bookmark the permalink.

2 Responses to The Prisoner: Hammer into Anvil