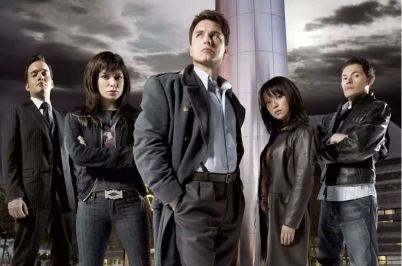 I often say the Brits are geniuses.  I mean it, too. But every so often a compliment can be used as a doubled-edged sword.  For instance, the creators of Torchwood must have thought: “hey, if we aim for the most offensive first-ever episode of a series, someone will come along and try to usurp us.  But no one is going to come along and aim for the most offensive SECOND episode!”  That’s some genius thinking there!  Yes, I know I referenced it last week, but I’m referring to Black Mirror again.  Sex with a pig on live television is going to beat sex with a cloud being, any day.  But the point still stands: if you want to attract an audience, it would be ill advised to write an episode to offend people.  So the obvious thing to ask next is: who wrote this one?  Surely Russell T. Davies wouldn’t.  Oh.  It was Chris Chibnall, writer of the lowest rated Doctor Who finale of the 21st Century.  Can’t say I didn’t see that coming.

So what’s wrong with Day One?  It’s Gwen’s first real experience with the team and she unleashes a monster.  There’s a euphemism waiting to be noticed.  The monster is a sex cloud and we’re going for some truly awkward scenes that makes Torchwood difficult to show to that teenage fan who wants to see more of the overall world of Doctor Who.  It’s not just the images, either.  It’s the often extremely crude language.  Not to say it wasn’t funny.  There are a number of comical lines, but I can’t help but feel like the Doctor’s universe didn’t need them.

So let’s just rewind: Gwen freakin’ harpoons a tool at Owen clearly mistaking him for a target in a javelin throwing contest. It pierces the outer shell of an asteroid from which a  sex cloud emerges.  It finds and inhabits a young woman name Carys who then goes about having sex with guys until they explode in a cloud of glowing particles and leave behind a very neat pile of dust.  Torchwood has to stop her.

Some of the places it goes wrong:

In complete fairness to Chibnall, I’m guessing the idea behind this episode must have come from all the ads that he saw while in Cardiff.  There is a sequence where the camera pans over tons of sex ads and, let’s be honest, sex sells!  But I can’t help but feel like some of these moments are missing the mark.  Or perhaps overstating the point is more accurate.

Some areas where it goes right:

There are also notable moments that are neither right nor wrong, but I loved them.  Cinematically, the camera following Carys is visually amazing.  It’s a trick I’ve seen before where a camera is attached to the front of the actor and it stares at them as they move around normally.  I also love the build up to the mystery of Jack; no one knows who he is or where he comes from.  Will we?  And I applaud the hand in the jar again.  “That’s worthless to anyone but me!”  Will it pay off one day, or is it just a neat background prop?  And speaking of background props… what the hell was up with this!? 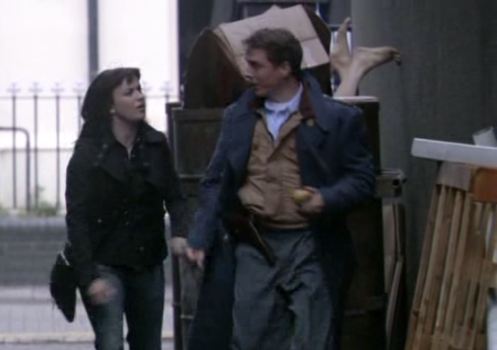 Come on… how does this go unspoken?

The episode ends with Jack gaining a bit of perspective, brought about by the humanizing influence of Gwen.  It’s the only aspect that allows Jack a pass with some of his comments; he’s forgotten what it means to be human.  So he wraps the episode by asking her to be normal, for him.  But after the things that have happened on day one, is there any chance she will ever be normal again?   In the world of Torchwood, what exactly is normal anyway?  ML

This entry was posted in Doctor Who, Entertainment, Reviews, Science Fiction and tagged Torchwood. Bookmark the permalink.

1 Response to Day One