The Prisoner: Do Not Forsake Me Oh My Darling

The start of this episode shows a great deal of promise, with a pre-credits sequence for the first time and a code hidden somewhere in a set of photographs. Unfortunately we are quickly into our silly sci-fi idea of the week, with Number Six’s mind being transplanted into the body of a rather boring middle-aged man. When the Colonel says “Impossible. I don’t believe it.” he was echoing my thoughts at that moment.

“If I told you ten years ago that we would have flown a rocket around the moon, would you have believed that?”

In case there was ever any doubt, that dates the series firmly in the era it was made, despite all the futuristic (and at times magical) technology. After 1969 nobody would use that turn of phrase. Despite not actually being set in the future, The Prisoner has been very inventive in coming up with technology ideas that will eventually come to pass, such as the wireless speaker and telephones, but this episode instead uses one of those lazy fantasy/sci-fi ideas that have been kicking around for a very long time. The Seltzman Machine, with its escalating beeps, flashing lights and lightning sound effect, has a pedigree that dates back to Frankenstein.

After a lot of flashbacks to pad out the episode, the body swap is done, and Patrick McGoohan is off to make a film while Nigel Stock takes over as Number Six. The episode wouldn’t have been beyond hope at this point, because the mind swap idea isn’t much worse than some of the previous pseudo-science stories we have had, such as manipulation of dreams, but it is obviously an idea that was going to live or die on the strength of the casting. Unfortunately, in an episode packed with lazy stock footage, the worst Stock footage of all is Nigel. There’s miscasting, and then there’s 48-year-old Nigel Stock as the Bond-a-like Number Six. Let’s face it, McGoohan (who once turned down the role of James Bond) is playing a similar character to Bond with Number Six, in many ways that I have enumerated in previous articles. Stock is even less Bond than Lazenby, which is not a sentence I ever expected to write about anyone. Now, possibly with the right actor a physical contrast could have worked well for the body swap. Number Six in the body of an old man or even a woman could have confounded our expectations and been something fascinating (and fun), but Stock is just stockier and a decade older than McGoohan, so he’s wrong enough to look awkward, without making that feel like a deliberate choice. Worst than that, he’s not the kind of actor who grabs the attention and makes you want to keep watching. Worst still, Clifford Evans isn’t one of those either, as the most forgettable Number Two to date.

One of the many continuity errors: 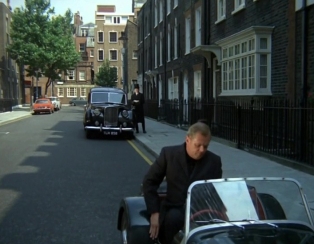 No taxi and big shadow

All the things that should have worked, despite the premise, also fall flat. Six/Colonel’s visit to the continent is accompanied by stereotypical stock music. He eventually proves his identity with his handwriting, which is an idea I just don’t buy. There are the usual fight sequences, which are marred even more than usual by some badly-disguised doubles. Liberal use is made of previously shot footage, most annoyingly the shots of McGoohan driving around London, which are interspersed with newly shot close-ups of Stock driving, presumably to save on the cost of doing another helicopter shoot (oh, how drones have revolutionised the television industry!). And as for Six/Colonel’s “message” to his fiancée, I’m not sure that’s the kind of message that should be delivered in person. Even the aforementioned code hidden in photos turned out to be a disappointment in the end. Surely the “clever boys” checked the old coloured lenses trick? I had that as a child in a board game and also a puzzle book. It doesn’t exactly require the Enigma Machine. Maybe you need to overlay bits of this whole episode over other bits of something, to piece together some actual entertainment. Or maybe somebody needs to edit out all the Stock footage. But without that, we probably wouldn’t have an episode at all. In this instance, that might just be for the best.   RP

Good God, what an unwieldy title.  Who came up with it?  Was it the title of a song?  A movie?  I mean, surely no one thought that up as an episode title on their own, did they?

The oddness of the episode is apparent from the start.  We get a prelude about some dude named Saltzman who has gone missing.  Then the opening begins and within minutes, we find that #6 is only in about 120 seconds of the episode.  His mind has been placed in the body of another man and he goes on a mission for the Village.

Now, let’s talk about something: if the Village really has this ability, what hope does anyone have?  The President of the United States could be replaced with the mind of a man… from… a… foreign… hey, wait a minute?!?!  No, no, that’s absurd!  But if the Village did have that power, my question is: why do they need Salzman?  They say it’s to “reverse the process” but that’s one of those anti-sense things that make my head hurt.  Why reverse it?  Why not just move the personality to the next body, even if that “next body” is the original body the mind came out of?  And for the love of Rover, shouldn’t this episode be called A Change of Mind?

Now beyond the fiction of the show, McGoohan was reticent to film intimate scenes, even turning down the role of James Bond because he did not feel right playing a womanizer.  So without McGoohan in the role, we can explore a bit about the character.  He’s engaged to a woman named Janet.  (This ties in with The Chimes of Big Ben when Nadia asked if he’s married, to which he said “no” but he refused to answer if he had a love back home!)  #6 worked for Janet’s father, which in a position such as he is in, one would consider highly irregular.  I do love the way Janet starts kissing this stranger.  She believes he is really with her love, but she would have to know an awful lot about the technology of the world to believe that.  Although, this was the late 60’s so it could just be that she’s a firm believer in “free love”!   We learn too that he’s been gone for a year at this point.  How long was he gone in Many Happy Returns when he speaks to Mrs. Butterworth?  That might hold a clue as to how long he’s been gone, and where things fall chronologically in the series.   We also see another important fact: when #6 takes money out of his safe, it is in the form of American Dollars!!!  Now why on Earth would that be the case?

There are a couple of other tidbits.  The garden party he goes to appears to be the same location as Madame Engadine’s party in A. B. and C.   Is Engadine perhaps #6’s fiancée’s mother?  And when #6 gets to the hidden spot where Salzman is, he is greeted with a “welcome to the Village”.  How much of what is happening is real, and how much illusion?  Could this be an extension of the drugs being used in another episode?

Then there’s the first hint of where the show was filmed.  Bear in mind that at the time, it was kept secret and is only announced during the opening of the final episode, but here we see Portmeirion Road on the envelopes. 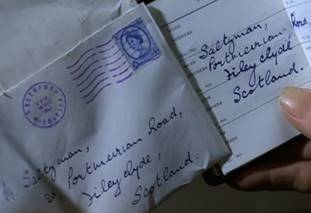 I do love that, as smart as #6 is, he has to count on his fingers when spelling out Saltzman to work out the numbers associated to the pictures, to use in the camera.  Damned brilliant idea, but do you have to count for the letters?  I know the key ones and can figure it out from there and I’m no super spy!  They also get around the problem of saying who #6 is by having him give his code name at the start of the episode: Zm73.

At any rate, the old “hide the mind” ploy doesn’t quite work to the Village’s desire.  The scientist escapes in another body and #6 had a chance to get out and stretch his… well, maybe only his mind, but the point stands.  This is a very strange episode, but probably the most straightforward spy story of the entire series.  And so little of it takes place in the Village, it made for a nice change of scenery.  But I just have to wonder if more of it takes place in the Village than we are lead to believe.  With all the future tech we see at their disposal, is it really such a stretch?   ML

Author of windowsintohistory.wordpress.com Co-writer on junkyard.blog Editor of frontiersmenhistorian.info
View all posts by Roger Pocock →
This entry was posted in Entertainment, Reviews, Science Fiction, Television and tagged Do Not Forsake Me Oh My Darling, The Prisoner. Bookmark the permalink.