Season one of Torchwood is a lot like watching a tennis match.  The ball goes to one side, pop, comes back to the other, pop, back to the good side, pop, back to the bad.  Episode 1 was a strong opener, but was followed by a ridiculous second, but came back for a strong 3rd episode, so it’s only natural, if a bit disappointing, that it would go back to the bad.  Chris Chibnall takes our breath away with episode four, Cyberwoman.   Let me be clear: it’s an action packed episode with just enough body horror and jump scares to keep us going, but it’s a story written for a different series than a spinoff of Doctor Who.

The premise is simple enough: Ianto has a girlfriend, Lisa, who was somehow smuggled into Torchwood tower along with all the Cyberconversion equipment needed for her to rebuild herself.   While Jack and company are out, he invites a scientist in who can help make her human again.  OK, great premise.  But there are rules about the Cybermen for one, and logic for another.  Science fiction, by its nature, asks us to suspend disbelief.  That’s OK, because that’s what we sign up for.  But the “lie” has to be buried deep enough that it takes intentional nit-picking to locate it.  If you can locate it too easily, it loses us before the story gets off the ground!  Cyberwoman tends to disregard that and puts the lie on display for all to see as if saying “I don’t care if it doesn’t make sense, so nah-nah-n’nah-nah!”  And I take issue with that.  I want my science fiction to be intelligent. 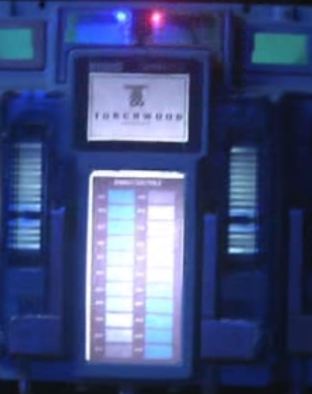 Branding at its best!

Here’s the thing: Ianto got her in while the team was out at some point in the past.  We don’t have an indication of how long ago that was so that means he’s been potentially sitting on this massive secret for some time.  Still, that could be plausible based on how often he’s left behind but it begs two questions: where was she until then?  She was supposed to have gone through this ordeal in Torchwood London; not exactly across the street!  And how did he get her and all the stuff into the building??  Was he taking public transportation or driving the parts up from London to Cardiff on weekends?  I’ll go a step farther: did he not realize the entire multi-tool contraption was a part of it, since he probably had to reassemble it?  And when did he take the time to brand it with the Torchwood logo?  (Yes, as the scientist says “You took parts from the Cyberconversion unit”, the camera pans over it and it’s all branded with Torchwood!)

Let’s also talk “Cybermen”: they don’t smile, but Lisa does when she starts getting power.  Lisa also is by far the sexiest Cyberman ever because for some reason, they left a lot of skin uncovered, gave her a cyber-bra, and cyber high heels.  These are the exact things a Cyberman would never do, because there is supposed to be uniformity to their whole race.  They don’t do “sexy” and they don’t do fashion.  Ianto’s line that they used “earth technology” doesn’t explain it.  And hey, since we’re on the subject of idiotic, the cyber-conversion stuff can be remote controlled by Jack’s vortex manipulator?  How and why would that be possible?  Or was this Chibnall giving us the Sonic Screwdriver of the Torchwood universe; a convenient tool to get out of any awkward situation?  (This on its own would have been fine if not for all the other gross missteps!)

The horror doesn’t end there.  Gwen and Owen have to hide, so they get on a morgue slab and lie on top of each other.  Suddenly, Owen starts kissing Gwen who doesn’t seem to struggle.  Meanwhile, Jack is kissing Ianto back to life or consciousness, not sure which, but why?  Both scenes were forced in there for no logical reason, only to make Gwen have to comment on Owen’s… excitement.  I was happier with last weeks kitchen sink; it fit better in the context of the story!

So Jack takes down the Cyberwoman by having a pterodactyl attack her.  Prehistory defeats the future, but only long enough to make Lisa weak.  Jack now tells Ianto he’s got 10 minutes to actually kill Lisa.  WHY?!  If this being is so powerful, is Jack just being an ass to prove Ianto better do what he’s been told to do?  That’s not the mark of a leader.  Ianto tells Jack “you’re the biggest monster of all” but it’s unfounded except for in this context.  There’s no reason not to go in with him unless Jack is playing “angry dad” who wants to make sure they kids follow his “law”.

Now if you’re thinking “wow, this sounded terrible” let me say two things: it’s fast paced and does hold the attention, so don’t let logic interfere too much but two: it gets worse!

Ianto had ordered pizza earlier in the episode and the pretty young girl who comes to deliver it encounters Lisa.  Ianto comes in (after Jack’s 10 minutes ultimatum) and finds Lisa dead, but the pizza delivery girl now has Lisa’s brain.  I’ve got no choice but to spell this out: Lisa cut the girls head open to put her own brain inside, then stitched her back up?  We suddenly have Frankenstein’s Cybermonster completed.  Thing is, she’s totally human barring the fact that the brain inside her head is what’s left of Lisa’s.  So you think: maybe the equipment did it.  Sure but why stop at just stitching up the head?  Why not do what it was built to do: convert the human into a Cyberman?  Not leave Pizza Girl in her denim jacket and just a little blood on her white shirt?

So we could have ended it with a really fascinating idea: Lisa lives in the body of another woman.  Ianto didn’t love her for what she looked like anyway (so she tells us… truly, who wrote this?).  Clean her up, and she has stitches in her scalp for a while, but all the Cybertech was missing; she was otherwise human again.   Yet that doesn’t stop Team Torchwood from opening fire and shooting her repeatedly until she’s completely stone dead.  OMG!  What.  The.  Hell!

I’ll go one final step in the list of things that made me angry.  In episode one, Jack takes a bullet to the head which promptly heals.  Ianto punches Jack in the face and splits his lip and that’s still there at the end of the episode.  Huh??

I’m worn out.  This had the potential to be a great episode but like Star Trek: Voyager all those years ago, went for sexy instead of going for thought-provoking and in the end, came away neither sexy nor thought-provoking.  Thankfully, if the tennis match continues, the next one should be good, so I’ll stick around, but for now, I need a drink.  I mean… wow.  Just, wow… ML

This entry was posted in Doctor Who, Entertainment, Reviews, Science Fiction, Spinoffs and tagged Torchwood. Bookmark the permalink.