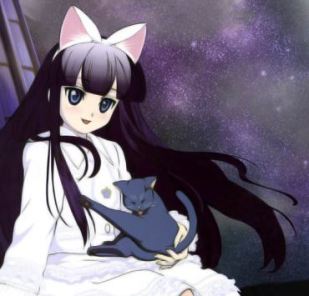 The opening titles set the tone for this anime series: more than a little odd, and also a bit cheap. It’s trying to be a vampire story with a difference. Two differences, actually: it tries very hard to be funny, and also the vampire is cute rather than threatening. In fact, the vampire is the victim, because she has been imprisoned in a castle and brainwashed. Luckily for her, professional photographer Kouhei visits her castle and it just so happens that he is immune to paranormal forces, can walk right through the barrier and give Hazuki her means to escape.

Moon Phase is a series that never quite knows what it wants to be, veering back and forth between comedy and jeopardy. When it is trying to do the dramatic storylines it is actually pretty good at that, although the series reaches a big climax halfway through and then fizzles out a bit. That’s because it gets the order of its villains back to front. The biggest of big bads is the Count who was keeping her captive, and towards the end of the series we get another big bad: Kouhei’s half sister Arte, but the Count is a much scarier foe, so I think should have been saved for the big climax to the series. As for the comedy, it is often slapstick in the broadest sense. There is a running joke of a pan dropping on Kouhei’s head in his house, which gradually becomes sillier and sillier until giant pans are dropping on everyone and everything from nowhere towards the end of the series. Maybe I’m missing something, but I just didn’t get the joke. But when the humour works it is a very funny series.

The characters are a mixed bag. Hazuki is brilliant, quite a tsundere character who gives Kouhei a hard time as her “slave”. The romance between her and Kouhei is a bit uncomfortable to watch because she is only 14 and looks a lot younger than that, and the animation is clearly trying to make the most of her “kissing” (biting) Kouhei’s neck. Luckily it is a one-way thing for almost the whole series and never amounts to much. As for Kouhei, he is largely a boring and generic main character, although there are times when he shines, such as the moment he takes Arte under his wing and makes her feel like part of a family for the first time in her life, which almost brought tears to my eyes it was so heartwarming. Then there is Kouhei’s grandfather, who is quite entertaining, Elfriede who should have been an interesting character but made me yawn, a cat spirit who is really funny, and Kouhei’s twin cousins who are supposed to be cute but are actually really irritating, especially when one of them starts dressing up as a cat to compete with Hazuki’s cute cat ear obsession.

The animation looks pretty cheap and there is sometimes a lack of consistency in the character art. The animators struggle to reconcile moments of close-up detail with the wider shots, and towards the end of the series it looks like time or money was running out because the character designs sometimes look a bit off. However, I really liked how they show Kouhei’s house as a cross-section, so you can see all the rooms at the same time and see what is going on in different rooms while the main action plays out in one of them. I’ve never seen that done before and it works very well. The animators also cope well with the action sequences, and all the scenes set in the castle. I was also impressed with their restraint in terms of the fanservice. The premise was crying out for this to be a fanservice series, but the vast majority of episodes have nothing more than the occasional creepy subtext. It is only towards the end of the series that there is anything a Western viewer might find especially uncomfortable, with the animators unnecessarily choosing to introduce the character of Arte with her swimming naked, although it is kept reasonably innocent and not really gratuitous.

This is a 26 episode series, which reaches its climax in the 24th episode. The 25th is a fun little bonus episode, while the 26th is a very bizarre OVA episode that is just about the weirdest thing I have ever seen, unconnected to the rest of the series, with the same characters in a very different set of circumstances. I think it’s supposed to be funny.

I know I’ve found a lot to criticise with this one, and it’s far from being the best anime you will ever watch, but it’s not trash either. If you want a light-hearted comedy with moments of excitement and a bit of cuteness and fun then this might just be one for you. I’ll leave you with the trailer for the dub version.   RP

Co-writer on junkyard.blog. Author of windowsintohistory.wordpress.com. Editor of frontiersmenhistorian.info
View all posts by Roger Pocock →
This entry was posted in Anime, Entertainment, Reviews, Television and tagged Moon Phase, Tsukuyomi, Vampires. Bookmark the permalink.