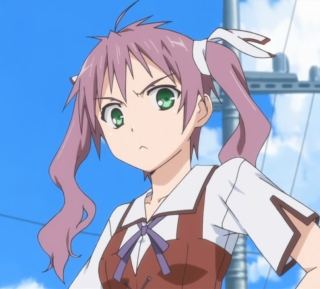 First broadcast in 2011, Mayo Chiki! has been out on DVD for a while now, so I was lucky enough to find it in a second hand DVD shop for a good price. I thought it was worth a try because it sounded funny. The premise is that a 17 year old boy, Kinjiro Sakamachi, suffers from gynophobia and some girls find out about it and try to cure him. If you’re not down with your phobias, gynophobia is a fear of women. Perfectly reasonable, you might say, but his is a bit extreme. If he gets close to a girl he gets a nosebleed. If things get too exciting, that gets so bad that he passes out.

One of the odd quirks of anime that I had to get used to when I started watching it was this whole nosebleed thing. Many comedy anime series have boys who get a nosebleed when they get excited about girls, for example if they catch a glimpse of something they shouldn’t be seeing. I have no idea if that’s based on any kind of a real medical condition, but I’m pretty sure if it is that it’s not as common as anime comedy shows would have us believe. Maybe it’s because they can’t show the real effect of a boy getting excited about a girl. The problem I have often found with this is that the animators obviously think it’s hilarious, but it generally isn’t. Luckily, Mayo Chiki! judges its comedy moments pretty well. At worst it’s consistently amusing. At best it had me laughing out loud.

There’s more going on than the gynophobia. At the same school as Kinjiro is an incredibly rich girl, Kanade, and her butler Subaru. As Kinjiro finds out in the first episode, Subaru is actually a girl disguised as a boy. The reason for that is she wanted to follow family tradition and become a butler, but that’s supposed to be a boy job. The whole gender swap thing is integral to the series, and unfortunately doesn’t make a great deal of sense. I’m not sure exactly how these things work in Japan, but over here a rich teenage girl would have female servants, not a butler to attend to her day-to-day needs. I’m pretty sure the same would apply anywhere, for obvious reasons. Subaru seems to function more as a bodyguard, which I suppose makes more sense if you ignore the fact that a teenager wouldn’t be ideally suited to that role, whatever the gender. Predictably, Subaru and Kinjiro become very close, and that leads to some amusing misunderstandings from the other students about the nature of their relationship. Subaru hasn’t really been able to have a friend before, so seeing her develop a connection with Kinjiro is one of the series’ more important and enjoyable aspects.

As you might have guessed from the premise, a lot of this stuff is used as an excuse for a heavy dose of fanservice, so if that offends you to the extent that you can’t get past the nudity to enjoy the comedy then this definitely won’t be the series for you. It’s reasonably justified by the subject matter, although each of the three girls who eventually find out Kinjiro’s secret end up having the same idea: they want to cure him, and they all try to do that by teasing him. It’s a questionable tactic, and… spoiler alert…. it never comes close to actually working, so it’s all a bit pointless. At times the animators’ attempts to find excuses to strip off the girls become ridiculously contrived. I’m not entirely sure that accidentally falling on top of a girl would make all her clothes come undone, for example.

This is also one of those frustrating series where there is more than one girl competing for the main character’s affections, and it never gets resolved in the end. The penultimate episode brings us closest to a resolution, and then the final episode is a frustratingly disposable side-step, as if they made an OVA episode and then just decided to tack it on to the main series instead.

The three main characters are all entertaining to watch, and there’s also the obligatory little sister, who is a lot more watchable than most of those because of an unusual character quirk: she’s a talented wrestler who is constantly trying to fight her brother, waking him up in the morning with wrestling moves. At least that makes a change from the usual cute little sis characters who crop up in just about every anime series nowadays. Two more main characters are added later in the series. We’ll move swiftly past Nakuru, whose character traits amount to little more than having big boobs and being a pervert, and who got on my nerves every time she appeared on screen. But my favourite character of the whole series was Usami, who gets nicknamed “Rabbit” because her name is so close to “usagi” and insists on calling Kinjiro “Stupid Chicken”, because… Sakamachi Kinjiro. There’s no dub on the disks, so hearing Usami throwing the insult “baka chiki!” at Kinjiro all the time is a lot of fun, and oddly a highlight of the series. Then again, I do like a tsundere girl, and Usami is definitely a textbook example of one of those, but a great execution of the trope, and her loneliness really tugged on the heartstrings and made her the girl I was rooting for in the love triangle. She’s the most fun, and the funniest, of all the regular characters, and often underutilised. In one really weird episode, it is revealed that her apartment is haunted, which doesn’t bother her one little bit. Seeing her sitting in front of the television accompanied by what looks like the ghosts from The Ring and The Grudge was just about the most bizarre sidestep I’ve seen any comedy series take, but that actually sums up Mayo Chiki! very well. The 13 episodes fly by, and if you don’t like one joke then there’s always something fresh just around the corner.

Usami should have been the one though. Stupid chicken.   RP